In topology, a topological space is called simply connected (or 1-connected) if it is path-connected and every path between two points can be continuously transformed, staying within the space, into any other path while preserving the two endpoints in question (see below for an informal discussion).

A sphere is simply connected because every loop can be contracted (on the surface) to a point.

To illustrate the notion of simple connectedness, suppose we are considering an object in three dimensions; for example, an object in the shape of a box, a doughnut, or a corkscrew. Think of the object as a strangely shaped aquarium full of water, with rigid sides. Now think of a diver who takes a long piece of string and trails it through the water inside the aquarium, in whatever way he pleases, and then joins the two ends of the string to form a closed loop. Now the loop begins to contract on itself, getting smaller and smaller. (Assume that the loop magically knows the best way to contract, and won't get snagged on jagged edges if it can possibly avoid them.) If the loop can always shrink all the way to a point, then the aquarium's interior is simply connected. If sometimes the loop gets caught — for example, around the central hole in the doughnut — then the object is not simply connected.

Notice that the definition only rules out "handle-shaped" holes. A sphere (or, equivalently, a rubber ball with a hollow center) is simply connected, because any loop on the surface of a sphere can contract to a point, even though it has a "hole" in the hollow center. The stronger condition, that the object have no holes of any dimension, is called contractibility. 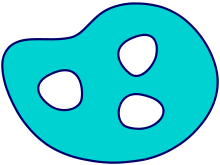 This set is not simply connected because it has three holes.

An equivalent formulation is this: X is simply connected if and only if it is path-connected, and whenever p : [0,1] → X and q : [0,1] → X are two paths (i.e.: continuous maps) with the same start and endpoint (p(0) = q(0) and p(1) = q(1)), then p and q are homotopic relative {0,1}. Intuitively, this means that p can be "continuously deformed" to get q while keeping the endpoints fixed. Hence the term simply connected: for any two given points in X, there is one and "essentially" only one path connecting them.

A third way to express the same: X is simply connected if and only if X is path-connected and the fundamental group of X at each of its points is trivial, i.e. consists only of the identity element.

Yet another formulation is often used in complex analysis: an open subset X of C is simply connected if and only if both X and its complement in the Riemann sphere are connected.

The set of complex numbers with imaginary part strictly greater than zero and less than one, furnishes a nice example of an unbounded, connected, open subset of the plane whose complement is not connected. It is nevertheless simply connected. It might also be worth pointing out that a relaxation of the requirement that X be connected, leads to an interesting exploration of open subsets of the plane with connected extended complement. For example, a (not necessarily connected) open set has connected extended complement exactly when each of its connected components are simply connected.

A torus is not simply connected. Neither of the colored loops can be contracted to a point without leaving the surface.

A surface (two-dimensional topological manifold) is simply connected if and only if it is connected and its genus is 0. Intuitively, the genus is the number of "handles" of the surface.

If a space X is not simply connected, one can often rectify this defect by using its universal cover, a simply connected space which maps to X in a particularly nice way.

If X and Y are homotopy equivalent and X is simply connected, then so is Y.

The notion of simple connectedness is important in complex analysis because of the following facts:

The notion of simply connectedness is also a crucial condition in the Poincaré lemma.