Charles Bulfinch (August 8, 1763 – April 15, 1844) was an early American architect, and has been regarded by many as the first native-born American to practice architecture as a profession.[1]

Bulfinch split his career between his native Boston and Washington, D.C., where he served as Commissioner of Public Building and built the intermediate United States Capitol rotunda and dome. His works are notable for their simplicity, balance, and good taste, and as the origin of a distinctive Federal style of classical domes, columns, and ornament that dominated early 19th-century American architecture.

Bulfinch was born in Boston to Thomas Bulfinch, a prominent physician, and his wife, Susan Apthorp. He was educated at Boston Latin School and Harvard University, from which he graduated with an AB in 1781 and Master's degree in 1784.

He then made a grand tour of Europe from 1785–1787, where he was influenced by the classical architecture in Italy and the neoclassical buildings of Sir Christopher Wren, Robert Adam, William Chambers and others in the United Kingdom. Thomas Jefferson became something of a mentor to him in Europe, as he would later be to Robert Mills.[2]

Upon his return to the United States in 1787, he became a promoter of the ship Columbia Rediviva's voyage around the world under command of Captain Robert Gray (1755–1806). It was the first American ship to circumnavigate the globe. In 1788 he married Hannah Apthorp, his first cousin. Their sons include Thomas Bulfinch (1796–1867), author of Bulfinch's Mythology, and Stephen Greenleaf Bulfinch (1809–1870), Unitarian clergyman and author. 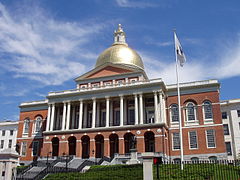 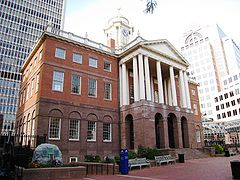 Bulfinch's first building was the Hollis Street Church (1788). Among his other early works are a memorial column on Beacon Hill (1789), the first monument to the American Revolution; the Federal Street theater (1793); the "Tontine Crescent" (built 1793–1794, now demolished), fashioned in part after John Wood's Royal Crescent; the Old State House in Hartford, Connecticut (1796); and the Massachusetts State House (1798).

Over the course of ten years, Bulfinch built a remarkable number of private dwellings in the Boston area, including Joseph Barrell's Pleasant Hill (1793), a series of three houses in Boston for Harrison Gray Otis (1796, 1800, 1806), and the John Phillips House (1804). He built several churches in Boston, of which New North (built 1802–1804) is the last standing.

Serving from 1791 to 1795 on Boston's board of selectmen, he resigned due to business pressures but returned in 1799. From 1799 to 1817 he was the chairman of Boston's board of selectmen continuously, and served as a paid Police Superintendent, improving the city's streets, drains, and lighting. Under his direction, both the infrastructure and civic center of Boston were transformed into a dignified classical style. Bulfinch was responsible for the design of the Boston Common, the remodeling and enlargement of Faneuil Hall (1805), and the construction of India Wharf. In these Boston years he also designed the Massachusetts State Prison (1803); Boylston Market (1810); University Hall for Harvard University (1813–1814); the Meeting House in Lancaster, Massachusetts (1815–17); and the Bulfinch Building of Massachusetts General Hospital (1818), its completion overseen by Alexander Parris, who was working in Bulfinch's office at the time the architect was summoned to Washington.

Despite this great activity and civic involvement, Bulfinch was insolvent several times starting in 1796, including at the start of his work on the statehouse, and was jailed for the month of July 1811 for debt (in a prison he had designed himself). There was no payment for his services as selectman, and he received only $1,400 for designing and overseeing the construction of the State House.

In the summer of 1817, Bulfinch's roles as selectman, designer and public official coincided during a visit by President James Monroe. The two men were almost constantly in each other's company for the week-long visit, and a few months later (1818) Monroe appointed Bulfinch the successor to Benjamin Henry Latrobe (1764–1820) as Architect of the Capitol in Washington, D.C. (The Capitol Building had been partially burned by the British in 1814.) In this position he was paid a salary of $2,500 per year plus expenses.

As Commissioner of Public Building, Bulfinch completed the Capitol's wings and central portion, designed the western approach and portico, and constructed the Capitol's original low wooden dome to his own design (replaced by the present cast-iron dome in the mid-1850s). In 1829 Bulfinch completed the construction of the Capitol, 36 years after its cornerstone was laid. During his interval in Washington, Bulfinch also drew plans for the State House in Augusta, Maine (1829–32). He returned to Boston in 1830, where he died on April 15, 1844, aged 80, and was buried in King's Chapel Burial Ground in Boston. His tomb was later moved to Mount Auburn Cemetery in Cambridge, Massachusetts. In 1943, a United States Liberty ship named the SS Charles Bulfinch was launched. The ship was scrapped in 1971.