Uakari is the common name for the New World monkeys of the genus Cacajao. Both the English and scientific names are believed to have originated from indigenous languages.[2]

The uakaris are unusual among New World monkeys in that the tail length (15-18 cm) is substantially less than their head and body length (40-45 cm). Their bodies are covered with long, loose hair but their heads are bald. They have almost no subcutaneous fat, so their bald faces appear almost skull like. Like their closest relatives the saki monkeys, they have projecting lower incisors.

Uakaris are typically lethargic and silent in zoo conditions, but in the wild they are agile and active, capable of leaps of over 6 meters.[citation needed] They have been observed both in small groups and in larger troops of up to 100. When traveling through the forest they move in the lower branches of the trees, though when foraging they also go up to the canopy. They eat fruit, nuts, buds and leaves.[citation needed]

Henry Walter Bates, the nineteenth century zoologist, recorded that the Native Americans captured uakaris alive by using blowpipe darts or arrows tipped with diluted curare; once captured the animals were revived by putting a pinch of salt in their mouths. Those animals that survived were kept as pets.[citation needed] 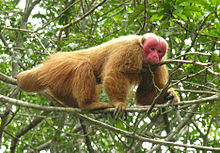