Mariticide
Not to be confused with Matricide.

Mariticide (from Latin maritus "married" + -cide, from caedere "to cut, to kill") literally means the murder of one's married partner, but has become most associated with the murder of a husband by his wife, as the reverse is given the name uxoricide.

In England the punishment until 1790 was to be strangled and burnt at the stake.[1] 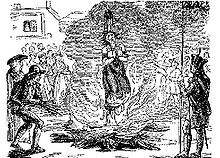 Anne Williams burned at the stake for mariticide in Gloucester, 1753.[1]