The State University of New York College of Environmental Science and Forestry (SUNY ESF) is an American specialized doctoral-granting institution located in the University Hill neighborhood of Syracuse, New York, immediately adjacent to Syracuse University. ESF also operates several regional campuses across central New York, including the New York State Ranger School in Wanakena, New York. The College's curricula focus on the understanding and management of the environment and natural resources. It is currently commemorating its centennial.[2]

Syracuse native and constitutional lawyer Louis Marshall, a prime mover for the establishment of the Adirondack and Catskill Forest Preserve (New York), became a Syracuse University Trustee in 1910. He confided in Chancellor James R. Day his desire to have an agricultural and forestry school at the University[6], and by 1911 his efforts resulted in a New York State bill to fund the project: the aforementioned appropriation bill signed by Governor Dix.[7] Marshall was elected president of the college's Board of Trustees at its first meeting, in 1911; at the time of his death, eighteen years later, he was still president of the Board.[8]

The first dean of the College was William L. Bray, a Ph.D., graduate from the University of Chicago[9], botanist, plant ecologist, biogeographer and Professor of Botany at Syracuse University. In 1907 he was made head of the botany department at Syracuse, and in 1908 he started teaching a forestry course in the basement of Lyman Hall. Bray was an associate of Gifford Pinchot, who was the first Chief of the United States Forest Service.[10][11] In 1911, in addition to assuming the deanship of forestry, Bray organized the Agricultural Division at Syracuse University. He remained at Syracuse until 1943 as chair of botany and Dean of the Syracuse Graduate School.[12]

In 1915, the same year that Dr. Bray published The Development of the Vegetation of New York State, he became one of the founding members, along with Raphael Zon and Yale School of Forestry's second dean, James W. Toumey, of the Ecological Society of America.[13] In 1950, the 1917 "activist wing" of that Society formed today's The Nature Conservancy.[14][15]

Fifty-two students were enrolled in the school's first year, the first 11 graduating two years later, in 1913.[16] One of the hallmarks of the College, its research, dates back to 1912, beginning with a study on what firms were using lumber in the state of New York as well as the wood species and quantities. In 1912, the College opened its Ranger School in Wanakena, New York, in the Adirondacks. The College began enrolling women as early as 1915, but the first women to complete their degrees—one majoring in landscape engineering and two in pulp and paper—graduated in the late 1940s.[17]

In January 1930, Governor Franklin D. Roosevelt, recommending an allocation of $600,000 towards construction of the college's second building, in honor of Louis Marshall, recently deceased, noted that: "under [Marshall's] leadership and the leadership of its late dean, Franklin Moon, the School of Forestry made giant strides until it became recognized as the premier institution of its kind in the United States".[18] The cornerstone of Louis Marshall Memorial Hall was laid in 1931 by former Governor and presidential candidate Alfred E. Smith who was elected to assume the presidency of the college's Board of Trustees.

The Syracuse campus is ESF's main campus, and is where most academic and administrative activity takes place. It is made up of seven main buildings:

Bray Hall, Marshall Hall, Illick Hall, and Moon Library border the quad. The college's new student dormitories, dubbed "Centennial Hall" after the institution's 100th anniversary, opened up for business on August 24, 2011. There are also a maintenance and operations building, garage, and greenhouse converted to office space. Among new buildings being planned is a new research support facility.

The historical Robin Hood Oak is located behind Bray Hall. The tree is said to have grown from an acorn brought back by a faculty member from the Sherwood Forest in England. It was the first tree to be listed on the National Registrar of Historic Trees in the United States. 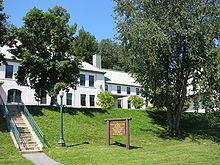 The Ranger School at Wanakena

Students in the forest and natural resources management curriculum spend an academic year (48 credits) or summer at the Ranger School, as it is simply called, to earn an Associate of Applied Science (AAS) degree in forest technology or surveying.[22] The campus is situated on the Oswegatchie River that connects to Cranberry Lake, in the northwestern part of the Adirondack Park. It includes the 3,000-acre (12 km2) James F. Dubuar Memorial Forest.[23]

ESF is considered a very competitive school. Admission is more selective, with an acceptance rate of 43.1 percent for fall 2009. ESF is ranked at 34th, tied with Michigan State University, and Miami-Ohio, and ahead of all other SUNY schools in the 2011 US News & World Report rankings of the top public national universities. Furthermore, ESF is ranked 79th in the 2011 US News & World Report list of the best National Universities (both public and private), also ahead of all other SUNY schools. The Washington Monthly College Guide has ranked ESF No. 26 among the nation's top service-oriented colleges and universities.

Forbes Magazine ranked SUNY-ESF #23 in its listing of “America’s Best College Buys” for 2010. Forbes.com has also ranked SUNY-ESF at No. 3 on its 2010 list of the 20 best colleges for women in science, technology, engineering and mathematics (STEM). SUNY-ESF is listed at No. 2, ahead of top programs like Duke, Cornell and Yale, among the best college environmental programs in the nation by Treehugger.com, a website devoted to sustainability and environmental news. DesignIntelligence magazine has ranked ESF's undergraduate and graduate programs in "Landscape Architecture", respectively at No. 12 and No. 9 in the United States.

Many students identify themselves as a "Stumpy" (or "Stumpie"). The nickname was given to students by their neighbors at Syracuse University, probably in the 1920s, and most-likely refers to forestry "stump jumpers". Although originally used as an insult, today, most students embrace the nickname with pride.

ESF has an agreement with adjacent Syracuse University that allows ESF students to enjoy many amenities offered by SU. ESF students take courses at their sister institution, can apply for admission to concurrent degree and joint certificate programs, and may join any SU organization except for NCAA sports teams. SU students are also welcome to enroll in ESF classes. Because of this, students feel a certain degree of integration with the Syracuse University community. Every May, ESF holds a joint commencement ceremony with Syracuse University in the Carrier Dome. ESF's baccalaureate diplomas bear the seals of both the State University of New York and Syracuse University.

Students also enjoy a variety of shops, restaurants, museums, and theaters in Syracuse, and nearby Marshall Street and Westcott Street.

ESF is an autonomous institution, administratively separate from Syracuse University, even while some resources, facilities and infrastructure are shared.[31] The two schools share a common Schedule of Classes; students take courses at both institutions, and baccalaureate diplomas from ESF bear the Syracuse University seal along with that of the State University of New York. A number of concurrent degree programs and certificates are offered between the schools, as well. The college receives an annual appropriation as part of the SUNY budget and the state builds and maintains all of the college's educational facilities. The state has similar relationships with five statutory colleges that are at Alfred University and Cornell University.

ESF faculty, students, and students' families join those from Syracuse University (SU) in a joint convocation ceremony at the beginning of the academic year in August, and combined commencement exercises in May. ESF and SU students share access to libraries, recreational facilities, student clubs, and other activities at both institutions, except for the schools' intercollegiate sports teams, affiliated with the NCAA and NAIA, respectively.[32]

The best known tradition among ESF students is that walking across the quad is shunned. The tradition most likely started in the 1980s or 1990s to inhibit tracks being worn into the grass. Hecklers have been known to yell and even tackle people walking across the quad. However, other activities such as Frisbee and soccer playing are encouraged on the Quad.

Eustace B. Nifkin, ESF's previous mascot, is an unofficial student. He first appeared in the 1940s after a group of students summering in the Adirondacks thought him up. Ever since, he has appeared on class rosters, written articles for The Knothole, and sent mail to the College from around the world. He has a girlfriend, the lesser-known Elsa S. Freeborn. SUNY granted him a bachelor's degree in 1972. The Alumni Lounge in Marshall Hall is dedicated to Nifkin.

Another well known legend is that of Chainer or Chainsaw who supposedly graduated in 1993.

More than 18,000 have graduated from ESF since its founding in 1911. The college's Alumni Association was founded fourteen years later, in 1925.[33] Notable alumni include:

The accomplishments of additional outstanding ESF alumni are documented at: http://www.esf.edu/success/.

From soon after its founding, ESF affiliated individuals have been responsible for establishing and leading prominent scientific and advocacy organizations around the world focused on the environment. Others have provided leadership to governmental environmental agencies.