The Colorado Mineral Belt (CMB) is an area with abundant ore deposits. The area stretches north-east from the La Plata Mountains in Southwestern Colorado to the Front Range near Boulder, Colorado. Most of the historic metal mining camps of Colorado lie in this area, the most important exception being the Cripple Creek District. 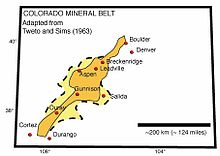 Approximate boundaries of the Colorado Mineral Belt, as defined by Tweto and Sims (1963). The inner area contains the principal mining districts; other significant ore deposits are contained within the additional area enclosed by the dashed lines.

The CMB is most famous for gold; over 25 million troy ounces (778 t) of the metal have been extracted from the area. The gold deposits were first discovered in 1858. Further finds in 1859 prompted the Pikes Peak Gold Rush lasting until 1867; over 1.25 million troy ounces (39 t) of gold were produced in those eight years. By 1874, most significant deposits in the CMB had been found. The peak year of gold production in Colorado was 1900 and there are no major gold mines currently in operation in the CMB, leaving a number of sites as ghost towns.

Molybdenum deposits in the CMB are of continuing interest. In April, 2006, Phelps Dodge Corporation announced tentative plans to reopen the Climax molybdenum mine near Leadville, where operations closed in 1995. The Henderson mine in the same region has been an active producer even when the mine at Climax was closed. In 2006, a deep tunnel at the Henderson mine was under consideration as a deep-earth lab for particle physics.

Major historic sites of mining in the Belt included Central City in the Front Range, west of Denver (4.2 million troy ounces (131 t) of gold 1859-1960); Leadville on the Arkansas River, gold was found there in the 1860s but the richer lead, silver and zinc lodes found from 1874 prompted more activity. In the San Juan Mountains the major finds were at Ouray, Silverton, Mount Sneffels, and Telluride where over 10 million troy ounces (311 t) of gold was mined. Extracting gold from river gravel placers was also popular and a number of sites such as Breckenridge and Fairplay yielded considerable quantities of gold.

The area is now more popular for tourism, especially skiing.

The ore deposits in the Colorado Mineral Belt lie within a zone that has been geologically active at intervals beginning from near the time of crustal accretion in central Colorado at least 1.6 billion years ago until the present. Parts of the CMB follow shear zones of Precambrian age. Those shear zones were active at several times during the Precambrian and also during the Paleozoic and Mesozoic. Igneous rocks intruded about 60 to 70 million years ago during the Laramide orogeny are associated with the belt and once were thought to be responsible for most of the ore deposits. Now many of the important ore deposits are thought to be genetically related to younger magmatism, some at least as young as about 25 million years. Today the zone is marked by relatively high heat flow and low seismic velocities in the crust.