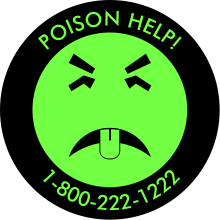 Mr. Yuk is a trademarked graphic image, created by the Children's Hospital of Pittsburgh, and widely employed in the United States in labeling of substances that are poisonous if ingested.

Mr. Yuk was conceived by Dr. Richard Moriarty to help children learn to avoid ingesting poisons. Living in Pittsburgh, the skull and crossbones previously used was not terribly helpful, because the Jolly Roger was the mascot for the local baseball team, the Pittsburgh Pirates. The color was chosen when Moriarty was showing different colors to students, and the green that was chosen was christened "Yucky!" by a young child. Hence, the name and the color. The design for Mr. Yuk was created by Wendy Courtney Brown, then a 4th grade student at Liberty Elementary in Weirton, West Virginia, as part of a Pittsburgh Poison Control design contest.[citation needed]

Over time, the use of Mr. Yuk stickers has gained a certain amount of nationwide usage in the United States.[citation needed] Mr. Yuk stickers usually contain phone numbers of poison control centers that may give guidance if poisoning has occurred or is suspected. Usually, stickers may carry a national toll-free number (1-800-222-1222 in the United States). In some areas, local poison control centers and children's hospitals issue stickers with local numbers, under license. Such an example is in Pittsburgh, where the telephone number for the Poison Control Center is 681-6669.

A memorably scary public service announcement was also produced in the 1970s featuring the theme song, becoming a popular culture icon unto itself for a number of generations.

The Mr. Yuk symbol has been used as a replacement for the traditional skull-and-crossbones (a.k.a. Jolly Roger) warning label for poison. Since children may associate this symbol with pirates, the symbol may be less effective at deterring ingestion.[1]

To evaluate the effectiveness of six projected symbols (skull-and-crossbones, red stop sign, and four others), tests were conducted at day care centers. Children in the program rated Mr. Yuk as the most unappealing product. By contrast, children rated the skull-and-crossbones to be the most appealing.[1]

However, at least two peer-reviewed medical studies (Fergusson 1982, Vernberg 1984) have suggested that Mr. Yuk stickers do not effectively keep children away from potential poisons and may even attract children.[2] Specifically, Vernberg and colleagues note concerns for using the stickers to protect young children. Fergusson and colleagues state that “the method may be effective with older children or as an adjunct to an integrated poisoning prevention campaign.”[3]

Mr. Yuk and his graphic rendering are registered trademarks and service marks of the Children's Hospital of Pittsburgh of UPMC, and the rendering itself is additionally protected by copyright. This means that the name and graphic image cannot be used without a license from the owner—unlike the skull and crossbones symbol, which is in the public domain.

The Children's Hospital of Pittsburgh of UPMC gives out free sheets of Mr. Yuk stickers if contacted by mail.[4]