Mahogany
This article is about the timber. For other uses, see Mahogany (disambiguation). 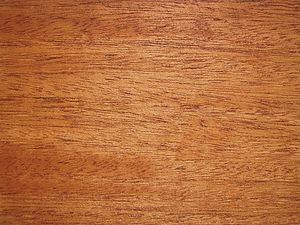 The name mahogany is used when referring to numerous varieties of dark-colored hardwood. It is a native American word originally used for the wood of the species Swietenia mahagoni, known as West Indian or Cuban mahogany.[1]

The term was next applied to the wood of Swietenia macrophylla, which is closely related, and known as Honduras mahogany.[2] Both are from the Meliaceae family.

Today, all species of Swietenia grown in their native locations are listed by CITES, and are therefore protected. Both Swietenia mahagoni, and Swietenia macrophylla were introduced into several Asian countries at the time of the restrictions imposed on American mahogany in the late 1990s and both are now successfully grown and harvested in plantations in those countries. The world's supply of genuine mahogany today comes from these Asian plantations, notably from India, Bangladesh, Indonesia and from Fiji, in Oceania.

Species of Swietenia cross-fertilise readily when they grow in proximity; the hybrid between S. mahagoni and S. macrophylla is widely planted for its timber. Mahogany is the national tree of Dominican Republic and Belize. It also appears on the national seal of Belize.

"Mahogany" may refer to the largest group of all Meliaceae, the fifteen related species of Swietenia, Khaya and Entandrophragma. The timbers of Entandrophragma are sold under their individual names, sometimes with "mahogany" attached as a suffix, for example "sipo" may be referred to as "sipo mahogany". Kohekohe (Dysoxylum spectabile), a close relative, is sometimes called New Zealand Mahogany.

The term "genuine mahogany" applies to only the Swietenia mahoganies, wherever grown. The term "true mahogany" applies to any timber commercially called "mahogany" with or without qualification that is derived from the Meliaceae family. In addition to Swietenia mahoganies this applies also to Khaya (African Mahogany) and Toona (Chinese Mahogany) which are both from the Meliacae (Mahogany) family.

In addition, the US timber trade also markets various other FTC-defined species as "mahoganies" under a variety of different commercial names, most notably "Philippine mahogany", which in reality is actually from the genus Shorea, a dipterocarp. This wood is also known as Lauan or Meranti.

Mahogany has a generally straight grain and is usually free of voids and pockets. It has a reddish-brown color, which darkens over time, and displays a reddish sheen when polished. It has excellent workability, and is very durable. Historically, the tree's girth allowed for wide boards from traditional mahogany species. These properties make it a favorable wood for crafting cabinets and furniture.

Much of the first-quality furniture made in the American colonies from the mid 18th century was made of mahogany, when the wood first became available to American craftsmen. Mahogany is still widely used for fine furniture; however, the rarity of Cuban mahogany and over harvesting of Honduras and Brazilian mahogany has diminished their use. Mahogany also resists wood rot, making it attractive in boat construction. It is also often used for musical instruments, particularly the backs, sides and necks of acoustic guitars and drums shells because of its ability to produce a very deep, warm tone compared to other commonly used woods such as Maple or Birch. Guitars featuring mahogany in their construction include Martin D-18 and Gibson Les Paul models.

Mahogany is now being used for the bodies of high-end stereo phonographic record cartridges[3] and for stereo headphones[4], where it is noted for “warm” or “musical” sound.