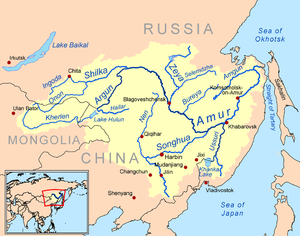 The Amur basin. Nerchinsk is part way up the Shilka. The Stanovoy Mountains are along the northern edge of the Amur basin.

The Treaty of Nerchinsk of 1689 (Russian: Нерчинский договор; Chinese: 尼布楚條約; pinyin: Níbùchǔ Tiáoyuē) was the first treaty between Russia and China. The Russians gave up the area north of the Amur River as far as the Stanovoy Mountains and kept the area between the Argun River and Lake Baikal. This border along the Argun River and Stanovoy Mountains lasted until the Amur Annexation in 1860. For background see History of Sino-Russian relations.

The agreement was signed in Nerchinsk on August 27, 1689.[1] The signatories were Songgotu on behalf of the Kangxi Emperor and Fedor Golovin on behalf of the Russian tsars Peter I and Ivan V.

The authoritative version was in Latin, with translations into Russian and Manchu, but these versions differed considerably. There was no official Chinese text for another two centuries,[2] but the border markers were inscribed in Chinese along with Manchu, Russian and Latin.[3]

Later, in 1727, the Treaty of Kiakhta fixed what is now the border of Mongolia west of the Argun and opened up the caravan trade. In 1858 (Treaty of Aigun) Russia annexed the land north of the Amur and in 1860 (Treaty of Beijing) took the coast down to Vladivostok. The current border runs along the Argun, Amur and Ussuri Rivers. 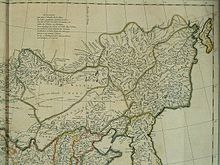 The northern border of "Chinese Tartary", as shown on this map from 1734, was more or less the Sino-Russian border line settled at Nerchinsk. Nerchinsk itself is shown on the map (on the Russian side of the border) as well.

A figurine of a European on horseback – Qing Dynasty Chinese export porcelain figurine, circa early-18th century

From about 1640, Russians entered the Amur basin from the north, into land claimed by the Manchus who at this time were just beginning their conquest of China. By 1685 most of the Russians had been driven out of the area. For this, see Russian-Manchu border conflicts. In addition, the Manchus had, by the 1680s, completed the conquest of China and eliminated the last Ming successor states in the south.[4] With the Manchu Qing dynasty now firmly in control of the South, it was in a position to deal with what they saw as Russian encroachment in Manchuria, the dynasty's ancient homeland.[5]

After their first victory at Albazin in 1685, the Manchus sent two letters to the Tsar (in Latin) suggesting peace and demanding that Russian freebooters leave the Amur. The Russian government, knowing that the Amur could not be defended and being more concerned with events in the west, sent Fyodor Golovin east as plenipotentiary. Golovin left Moscow in January 1686 with 500 streltsy and reached Selenginsk near Lake Baikal in October 1687, from whence he sent couriers ahead. It was agreed the meeting would be in Selenginsk in 1688. At this point the Oirats (western Mongols) under Galdan attacked the eastern Mongols in the area between Selenginsk and Peking and negotiations had to be delayed. To avoid the fighting Golovin moved east to Nerchinsk where it was agreed that talks would take place. The Manchus with 3,000 to 15,000 soldiers under Songgotu left Peking June 1689 and arrived in July. Talks went on from August 22 to September 6.

The language used was Latin, the translators being, for the Russians, a Pole named Andrei Bielobocki and for the Chinese the Jesuits Jean-Francois Gerbillon and Thomas Pereira. To avoid problems of precedence, tents were erected side by side so that neither side would be seen as visiting the other. G.P. March remarks that there were no mandarins with them, since the journey had to be made on horseback and few Chinese gentlemen had mastered this undignified skill.[6] However, there was little need for Chinese mandarins, just as there was no need for an immediate Chinese translation. The language of the Qing court remained Manchu at this time, and Manchu continued to be the "official" court language into the eighteenth century.[7] Perhaps more significantly, Russian acceptance of the treaty required a relaxation of what had been, in Ming (the former dynasty) times, an iron rule of Chinese diplomacy, requiring the non-Chinese party to accept language which characterized the foreigner as an inferior or tributary.[8][9] The conspicuous absence of such linguistic gamesmanship from the Treaty of Nerchinsk,[10] together with the equally conspicuous absence of Chinese language or personnel, suggests that the Kangxi emperor was using the Manchurian (and Latin[11]) language as a deliberate end-run around his more conservative Han bureaucracy. This was a tactic regularly used by early Qing emperors in matters which were particularly delicate or confidential.[12]

The Manchus wished to remove the Russians from the Amur. They were interested in the Amur since it was the northern border of the original Manchu heartland. They could ignore the area west of the Argun since it was then controlled by the Oirats. The Kangxi Emperor (i.e. the reigning Qing (Manchu) Dynasty emperor of China) also wished to settle with Russia in order to free his hands to deal with the Zunghar (= Dzungar, Junghar, etc.) Mongols of Central Asia, to his northwest.[13][14] The Manchus also wanted a delineated frontier to keep nomads and outlaws from fleeing across the border.[15]

The Russians, for their part, knew that the Amur was indefensible and were more interested in establishing profitable trade, which the Kangxi Emperor had threatened to block unless the border dispute were resolved.[16] Golovin accepted the loss of the Amur in exchange for possession of Trans-Baikalia and access to Chinese markets for Russian traders. The Russians were also concerned with the military strength of the Manchus, who had demonstrated their capability, in 1685 and 1686, by twice overrunning the Russian outpost at Albazin.[17]

The agreed boundary was the Argun River north to its confluence with the Shilka River, up the Shilka to the 'Gorbitsa River', up the Gorbitsa to its headwaters, then along the east-west watershed through the Stanovoy Mountains and down the Uda River (Khabarovsk Krai) to the Sea of Okhotsk at its southwest corner.

The border west of the Argun was not defined (at the time, this area was controlled by the Oirats). Neither side had very exact knowledge of the course of the Uda River. The Gorbitsa is hard to find on modern maps. Ravenstein, writing in 1861, suggested that there are two Gorbitsa Rivers. He thought that the lower Gorbitsa is the modern Almazar which enters the Amur about 25 miles downstream from the Argun-Shilka junction and that the upper Gorbitsa is the modern Chernaya which enters the Shilka about 100 miles upstream from the junction. He thought that the Almazar is almost certainly the real Gorbitsa. He then repeats a tale to the effect that about 1710 a Tungus deserted to the Russian side of the border. He evaded being sent back by claiming the upper Gorbitza was the real border. The Chinese were happy with this and moved the boundary stone.

The treaty had six paragraphs: 1 and 2: definition of the border, 3. Albazin to be abandoned and destroyed. 4. Refugees who arrived before the treaty to stay, those arriving after the treaty to be sent back. 5. Trade to be allowed with proper documents. 6. Boundary stones to be erected, and general exhortations to avoid conflict.

(Note that this summary given by G. Patrick March differs from the Manchu text given the Wikisource. March may have been summarizing the Latin or Russian text.)