Motorcycle trials, also termed observed trials, is a non-speed event on specialized motorcycles. The sport is most popular in the United Kingdom and Spain, though there are participants around the globe.

Trial motorcycles are distinctive in that they are extremely lightweight, lack seating (they are designed to be ridden standing up) and have suspension travel that is short, relative to a motocross or enduro motorcycle.

Motorcycle trials is often utilized by competitors of other motorcycle sports (such as motocross or street racers) as a way to cross-train, as trials teaches great throttle, balance, and machine control.

The event is split into sections where a competitor rides through an obstacle course while attempting to avoid touching the ground with the feet. The obstacles in the course may be of natural or constructed elements. In all sections, regardless of content, the designated route is carefully contrived to test the skill of the rider. In many local observed trials events, the sections are divided into separate courses to accommodate the different skill level of riders, who compete in skill-rated classes. 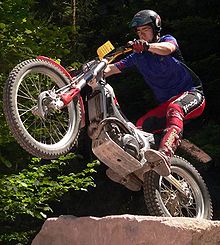 In addition to the world championship events, there are other major events, such as the Scottish Six Days Trial (SSDT) and the Scott Trial.

Major current manufacturers of trials bikes are Gas Gas, Beta, Sherco, Montesa Honda, and Scorpa. In the past there have been many manufacturers, from countries such as Spain, Japan, Britain and Italy.

Classic classes exist for vintage bikes. Classes include pre-1965 or -1967 motorcycles (typically British), as well as newer vintage events for observed trials motorcycles with two rear shock absorbers. In most cases, twin-shock motorcycles were manufactured before 1985 and are typically Japanese or Spanish. A recent addition has been a class for air-cooled monoshock bikes, this covers machines up to around 1990.

A competition event is called an "observed trial" or "trial" (not plural), unless referred to as an "observed trials event." A newer name for the sport, MotoTrial, is gaining popularity, but is far from universally used or accepted.

A sidecar trials bike competing in an observed section

As well as the traditional solo motorcycle trials, there is a form of the sport on 3 wheels known as Sidecar Trials consisting of a driver and a passenger. The competition is run in the same way as a standard motorcycle trial with the only exception being additional ways to be given a score of 5. This involves the passenger, who will earn the competitor a 5 if any part of the passenger's body touches any terrain. The role of the passenger is to balance the sidecar and prevent the sidecar wheel from lifting which would cause the driver to restablise the outfit by using his foot (incurring a score of 1). Sidecar Trials is predominantly British, however there are events run in Europe and Australia. The British Championship is the highest level of competition, held over 10 rounds with 3 difficulty levels; Clubman, Intermediate & Expert, with the Expert class championship winner being named British Sidecar Trials Champion.

There is another type of motorcycle trial known as a long distance trial. This is where not only modern motorcycles take part but vintage motorcycles and cars too. Long distance trials are not restricted to one venue. It incorporates a carefully planned out route for the competitors to follow and make stops at various locations incorporating places throughout many different counties. This takes place not only on the main roads but also lanes that are steep, rough and loose surfaced hills. Points are given to the competitor for putting his foot down on the ground, falling off or stopping (and putting their feet down). These trials can be expected to be completed within certain timescales and can mean not arriving at a particular section and or destination until your allocated timeslot. A popular club that runs this type of trial is the Motor Cycling Club (MCC) founded in 1901.