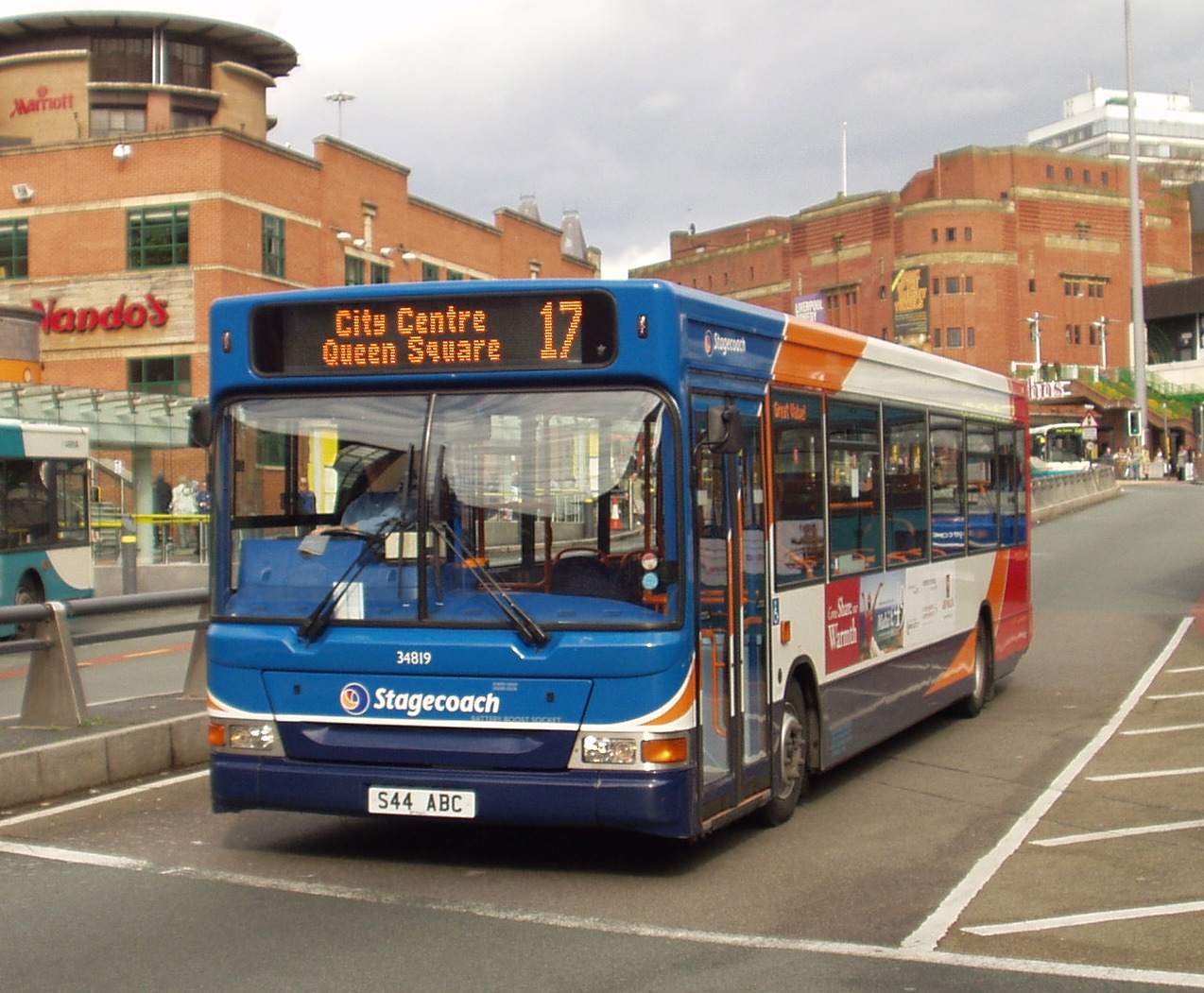 Stagecoach Merseyside is a major operator of services in the English city of and in the surrounding area of . It is a subsidiary of the . It was formed in July 2005 due to the acquisition of Glenvale Transport Limited (GTL), which in turn had initially been formed by ex-MTL managers bidding for company, following a ruling that Arriva must sell their newly acquired Gillmoss depot to preserve the competition within the Merseyside area.

The fleet of the newly created Glenvale Transport Limited mostly comprised elderly Leyland Titans and aging s, although efforts were made to update the fleet via an agreement with Essex-based dealer , seeing newer buses arrive regularly from the end of 2003 right up to the Stagecoach takeover in the summer of 2005. Several much newer buses, although in need of repair, were permanently stationed at the depot, likely due to financial struggles making it difficult to repair the buses.

The company was sold to in 2005, who pledged to invest in new buses for Merseyside. The result since takeover has been a £6.5m fleet of 75 new buses that have entered service with the company, with the sale and disposal of older buses previously in operation with Glenvale.

On numerous occasions Stagecoach made bids for some or all of the companies making up the former MTL Trust Holdings Ltd. At the beginning of 1998 it was rumoured to have bid £100m for the complete MTL group including its , and rail franchises and the MTL London bus operation. In June 1998 MTL did sell off MTL London but Stagecoach were outbid by the then independent . When MTL went bankrupt in January 2000 Stagecoach was very interested in acquiring the company but was again outbid this time by . It wasn't known at the time but Stagecoach did bid for the Gillmoss depot after Arriva was ordered to dispose of it. But again it was an unsuccessful bidder losing out to GTL. Apart from a Stagecoach Ribble/North West service between and and a Sunday only Lancashire County Council contract from to Preston/ it seemed unlikely that Stagecoach would ever have significant operations on Merseyside. When rumours of a sale at GTL surfaced around 2005 it was with its nearby operations First Cheshire & Wirral and - which had a school bus division in nearby , the and who at the time were bidding for 's ill-fated scheme who seemed like the front runners to buy GTL. However on Wednesday , GTL accepted a reported £3.4M cash

A major priority was updating the mainly elderly fleet inherited from GTL and many 'Stagecoach Standard' Volvo B10M/'s were sent to Merseyside in the initial months after the takeover along with a handful of Leyland Olympian/s and oddities like Volvo B6/Wright Crusader (30342/N416KPS) which had been used in rural Scotland by Docherty of Irvine. A £6.5m order for 75 Alexander Dennis Dart SLF/Pointer 2 were received from September 2005 to March 2006 along with 8 similar TransBus/Dennis Dart SLFs new in 2003/04 which came from Stagecoach North West's Carlisle operation and refurbished after being damaged in the January 2005 floods in the town. The ex-CMT vehicles which had been left in various states of disrepair after GTL hit financial problems were also refurbished.

Many of the loss making services started by GTL to compete with Arriva along with some Merseytravel contracts have been withdrawn. In turn Arriva has withdrawn from Kirkby and North Liverpool with the exception of the 14/14A (Croxteth-Liverpool). Stagecoach have significantly reduced the fleet from a peak of 290 to approximately 195 vehicles and many of the former GTL vehicles have now left the fleet. The Volvo B6/Alexander Dash were again sold to Ensignbus, although some newer examples moved to other companies within the . Stagecoach Yorkshire received some Reeve Burgess/Plaxton Pointer-bodied s along with the ex-CMT Buses / and Alexander Striders and the s with and bodies which had been new to ABC Travel after Stagecoach acquired the Yorkshire Traction Group in December 2005. Stagecoach North West also became home to the ex-CMT Dennis Dart/Northern Counties Paladins, ex-MTL Dennis Dart SLF/Marshall Capitals and a handful of Leyland Titans. The remaining MCW Metrobuses and Leyland Titans, some of which were now 27 years old, were mostly scrapped although given the historical nature the Titan had on Merseyside's post deregulation bus scene Stagecoach Merseyside arranged a Last Titan Day on Saturday 4th February 2006 (see below).

However the new investment and changes at Stagecoach Merseyside has attracted some criticism. Historically the routes inherited from GTL in Kirkby and North Liverpool have been double deck with low - but increasing, levels of car ownership and high - but reducing, passenger numbers. However after the Leyland Titans were withdrawn in February 2006 amidst general concerns about vandalism and anti-social behaviour on public transport - although Merseyside is generally considered no worse than other urban areas in this regard, the management at Stagecoach Merseyside decided to make the operation 100% single deck transferring the remaining Alexander-bodied Leyland Olympians to other parts of the . The Alexander Dennis Dart SLF/Pointer 2 now forms the bulk of the frontline fleet and although bus use on Merseyside has to some degree declined in the post deregulation period standing loads and overcrowding is quite common on the vast majority of routes operated Stagecoach Merseyside defeating many of the benefits vehicles can offer. A Spring 2006 review of services in Kirkby and North Liverpool compounded this problem with many former GTL routes being rationalised, curtailed, withdrawn or reduced in frequency - in particular in the evening and Sunday period, and has attracted adverse comment from both bus users on Merseyside and Merseytravel who've criticised the profit driven approach Stagecoach and Arriva seemingly have towards the Merseyside bus market and Merseytravel has used this as a platform for re-regulation of the bus industry more generally. Observers of the Merseyside bus scene also consider 12m single deckers like the / and more suited to the urban characteristics of the bus network on Merseyside than the midi-sized SLFs Stagecoach Merseyside are operating at present. However there is no sign of new orders or a shift in vehicle policy at Stagecoach Merseyside at present.

A recent development was the closure of Aintree depot on exactly 4 years after the acquisition of CMT Buses by GTL. Stagecoach Merseyside is unique in being the only company within the Stagecoach Group to have just one depot with all the operations now based at Gillmoss. A small problem was a software incompatibility between the Wayfarer 3 ticket machines used at Aintree and Gillmoss resulting in the former Aintree vehicles staying on their former routes. This problem was resolved on 20th January 2008 when new TP5000 machines were introduced resulting in the vehicle allocation at Gillmoss being seen on a wider variety of routes than had previously been the case.

However despite minimal competition and seemingly cordial relations with Arriva Merseyside/North West Ltd a low fare Magic Bus operation began on the 14 group of services between Broadway () and Liverpool City Centre on 15th September 2008. The Magic Bus operation is rumouredly being used by Stagecoach to encourage Arriva to withdraw their 14/14A routes (Croxteth - Liverpool City Centre) along North Liverpool's popular Breck Road corridor. Coincidentially Stagecoach Merseyside withdrew their journey's on route 79 (Netherley - Liverpool City Centre) on 14th September 2008 with the effect that is now Arriva's only competitor on the popular Picton/Wavertree Road corridor in South Liverpool. Further expansion of Magic Bus within Stagecoach Merseyside is possible and route 86/86C (Gartson/Liverpool Hope University-Liverpool City Centre) via South Liverpool's Allerton/Smithdown Road corridor is considered a prime candidate for such a move as it has a student clientele and similar characteristics to that which exists along the Wilmslow Road in South Manchester. Local authority owned Halton Transport however did interest Stagecoach and an approach was made by the Stagecoach Group to acquire the company from Halton Borough Council in 2005/06. At the moment Halton Borough Council doesn't want to sell Halton Transport and it's unknown how serious the approach from Stagecoach really was. However the recent sale of local authority owned Yellow Buses Bournemouth and Blackburn Transport to Transdev and Chesterbus to FirstGroup plc does raise the possibility of a future sale of Halton Transport in the non too distant future and its Widnes depot would allow Stagecoach Merseyside more strategic fit for its routes in St Helens and East/South Liverpool than Gillmoss offers at present.

In 1992 Merseybus in an effort to modernise its fleet entered into an agreement with to purchase a significant quantity of their Leyland Titans dating from 1978 to 1984. These proved popular with other operators on Merseyside and overall approximately 400 Titans saw service in the region and by the time of the takeover of GTL by Stagecoach there were still quite healthy numbers in service.

However Stagecoach quickly made the replacement of the aging fleet on Merseyside (see above) a top priority and by the beginning of 2006 only a handful remained in service. Most Merseyside bus enthusiasts took to the Titan well with some of these vehicles spending more time on Merseyside than they did in London and Stagecoach Merseyside therefore decided to hold a Last Titan Day on Saturday 4th February 2006.

This event was very successful and also featured a host other vehicles including Stagecoach Chesterfield's ex-Grimsby-Cleethorpes open-top /Roe (15513/MBE613R), Stagecoach Manchester/Magicbus Scania N113DRB/Northern Counties (15344/J144HMT) which had been new as London Buses S44 and based at the East London subsidiary - a former stronghold of the Titan, ex-Merseyside Transport Leyland Atlantean/Alexander AL (1055/A135HLV) once based at Gillmoss, ex-Greater Manchester Transport (8551/ANA551Y) once based at Wigan and a regular visitor to Merseyside and finally (RML2716/SMK716F) which was the oldest vehicle to participate in the event.

The buses were launched at by Tom Wileman, Stagecoach Regional Director, and Liverpool FC legends , , , , and . Also at the ribbon cutting ceremony was the actual trophy which Liverpool FC won for a record fifth time in Istanbul in 2005.

Speaking at the ribbon cutting, Liverpool legend David Fairclough said: "Both buses look brilliant, it's a great tribute to our European history". Tom Wileman of Stagecoach added, "Liverpool's achievements in European football have been fantastic, not only for the city but for the whole region and we wanted to recognise and celebrate that".

The new buses feature images and facts from Liverpool FC's 5 successful European Cup victories of 1977, 1978, 1981, 1984 and 2005. The double decker is operated by Stagecoach North West and will operate on the X2 route between Liverpool, Southport and Preston while the single decker is operated by Stagecoach Merseyside and will operate across the city of Liverpool and other parts of Merseyside.

A similarly branded bus for Everton FC was also introduced into service at the end of September 2007 and these buses will be in service through to 2008 when the city of Liverpool will celebrate being .

Vehicle types in use