Ameche was born Dominic Felix Amici in Kenosha, Wisconsin, the son of Barbara, who was of Irish and German descent, and Felix Ameche, an immigrant from Italy whose original surname was "Amici." He had three brothers, Umberto (Bert), James (Jim Ameche), and Louis and three sisters, Jane, Elizabeth and Catherine.[3] Ameche attended Marquette University, Loras College and the University of Wisconsin, where his cousin Alan Ameche played football and won the Heisman Trophy in 1954.[4] Ameche had gone to university to study law but found theatricals far more interesting and so decided on a stage career.

From 1946 to 1949, Ameche, along with other Los Angeles entertainment figures including Bing Crosby and Bob Hope, was a co-owner of the Los Angeles Dons of the All-America Football Conference, a rival to the National Football League[5]. Ameche was instrumental in forming and leading the ownership group in the year before play began[6] and initially served as team president.[7]

Ameche was married to Honore Prendergast from 1932 until her death in 1986. They had six children. One, Ron Ameche, owned the restaurant "Ameche's Pumpernickel" in Coralville, Iowa. Ameche's younger brother, Jim Ameche, was also an actor in radio and films. His other brother, Bert, was an architect who worked for many years for the U.S. Navy in Port Hueneme, California and for the US Postal Service in Los Angeles, California, before retirement.

Ameche died on December 6, 1993, at his son Don Jr's house in Scottsdale, Arizona of prostate cancer,[8] at the age of 85. He was cremated and his ashes are buried at Resurrection Catholic Cemetery, also known as St. Philomena's Cemetery, in Asbury, Iowa.[9]

Ameche had done well in college dramatics and when a lead actor for a stock company production of Excess Baggage did not turn up, a friend persuaded him to stand in for the missing actor. He enjoyed the experience and got a juvenile lead in Jerry For Short in New York, followed by a tour in vaudeville with Texas Guinan, until Guinan dropped him from the act, dismissing him as "too stiff."[10] He made his film debut in 1935 and by the late 1930s, had established himself as a leading actor in Hollywood. He appeared in such films as Alexander's Ragtime Band (1938), as the title character in The Story of Alexander Graham Bell (1939). It led to the use of the word, "ameche," as slang for telephone in common catchphrases, as noted by Mike Kilen in the Iowa City Gazette (December 8, 1993): "The film prompted a generation to call people to the telephone with the phrase: 'You're wanted on the Ameche.'"[11] Another highlight was co-starring with Gene Tierney in Ernest Lubitch's Heaven Can Wait, a film nominated for the Academy Award for Best Picture.

Ameche played so many roles based on real people that on one of his radio broadcasts Fred Allen joked that "Pretty soon, Don Ameche will be playing Don Ameche." Soon afterwards, in It's in the Bag!, which starred Allen, Ameche indeed played himself in a bit part.

Ameche was a major radio star, heard on such shows as Empire Builders, The First Nighter Program, Family Theater and the Betty and Bob soap opera. Following his appearances as announcer and sketch participant on The Edgar Bergen/Charlie McCarthy Show, he achieved memorable success during the late 1940s playing opposite Frances Langford in The Bickersons, the Philip Rapp radio comedy series about a combative married couple. It began on NBC in 1946, moving to CBS the following year.

He also enjoyed a substantial Broadway career, with roles in Silk Stockings, Goldilocks, Holiday for Lovers, Henry, Sweet Henry and Our Town. 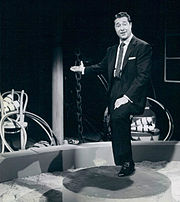 As host of International Showtime, 1962.

Ameche's best-known television role came between 1961 and 1965, when he traveled throughout Europe with a television videotape unit and camera crew to cover a different European resident circus or ice show that was taped for presentation on a weekly series titled International Showtime on NBC television. Ameche was present at each circus or ice show taped for the series, and was seen as host and commentator. His "anchor position" was in the grandstands at the particular show being taped.

He also guest starred in many television series, including NBC's The Polly Bergen Show and ABC's The Pat Boone Chevy Showroom and Jack Palance's circus drama, The Greatest Show on Earth, which aired in the 1963-1964 season. In the latter 1960s and early 1970s, Ameche directed the NBC television sitcom Julia, starring the African American actress Diahann Carroll.

After the release of two 1970 comedies, The Boatniks and Suppose They Gave a War and Nobody Came?, Ameche was absent from theatrical films for the next 13 years. His only appearance in cinema during that time was in F For Fake, Orson Welles' documentary on hoaxes, when 20th Century-Fox mistakenly sent Welles newsreel footage of Ameche misidentified as footage of Howard Hughes.

Ameche and fellow veteran actor Ralph Bellamy were eventually cast in John Landis' Trading Places in 1983, playing rich brothers intent on ruining an innocent man for the sake of a one-dollar bet. In an interview some years later on Larry King Live, co-star Jamie Lee Curtis said that Ameche, a proper old-school actor, went to everyone on the set ahead of time to apologize when he was called to say the "F-word" in the film. The film's success and their comedic performances brought them both back into the Hollywood limelight. Ameche's next role, in Cocoon (1985), won him an Academy Award for Best Supporting Actor. He continued working for the rest of his life, including in the sequel, Cocoon: The Return. He earned good reviews for the David Mamet / Shel Silverstein penned Things Change; the New York Times said that he showed "...the kind of great comic aplomb that wins actors awards for other than sentimental reasons."[12] In 1990, Ameche appeared in an episode of The Golden Girls as Rose Nylund's father. His last films were Homeward Bound: The Incredible Journey (1993) and Corrina, Corrina (1994), completed only days before his death. 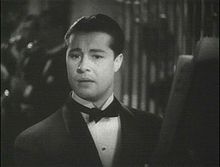 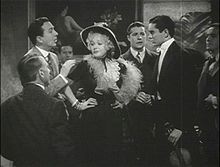