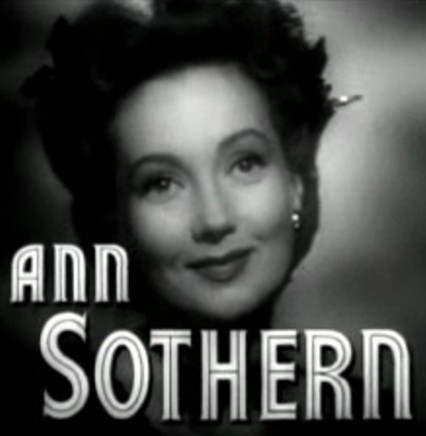 Born Harriette Arlene Lake in , although she went to Central High School in with classmate Edward Heimberger (later to become known as ), Sothern left home very young and began her film career as an extra in the 1927 film, "Broadway Nights" at the age of 18. During 1929 and 1930, she appeared as a chorus girl in such films as "" and "" (as one of the ""). She also appeared on Broadway and had a trained voice, occasionally singing in films.

In 1934, Sothern signed a contract with , but after two years the studio released her from the contract. In 1936, she was signed by and after a string of films that failed to attract an audience, Sothern left RKO and was signed to , making her first film for them in 1939.

In a role originally intended for , MGM cast Sothern in the film "" (1939), as brassy dancer Mary Anastasia O'Connor who also goes by the stage name Maisie Ravier. In Mary C. McCall Jr.'s screenplay of Wilson Collison's novel, Maisie is stranded penniless in a small town, takes a job as a ranch maid and becomes caught in a web of romantic entanglements. After years of struggling, Sothern had her first real success, and a string of "Maisie" comedy sequels followed, beginning with "Congo Maisie"'(1940), followed by "Undercover Maisie" (1947) in which Maisie infiltrates a gang of con men headed by a phony . A review of "Swing Shift Maisie" (1943) by "Time magazine" praised Sothern and described her as "one of the smartest comediennes in the business". [cite web|url=http://jcgi.pathfinder.com/time/magazine/article/0,9171,778062,00.html | title=The New Pictures| author=Time.com | ]

In 1949, Sothern appeared in the Oscar winning film, "". The film earned her excellent reviews, but failed to stimulate her career. During the 1950s, she made a few movies, including "" (1953), but mainly appeared on various television shows. In 1953, she landed the lead role in the series "Private Secretary". After "Secretary" ended in 1957 due to a contract dispute between Sothern and producer , she appeared in her own show, "", from 1958 to 1961. Both programs were successful and earned Sothern four nominations.

Previously a stunning beauty, Sothern had a bout of which left her with a bloated, overweight appearance; so she preferred not to be seen. In 1965, she was heard as the voice of Gladys Crabtree (the car) in the short lived series "", which co-starred . The series was unsuccessful and was canceled after 30 episodes.

During this period, Sothern made occasional guest appearances on "" with her old RKO and MGM cohort, . After left the show, Sothern was considered to replace Vance, but the role was given to . In 1967, her former boss , the first husband of Lucille Ball, approached her to co-star with as battling neighbors in "". However, felt that Sothern's style was too similar to Arden's, so the very differently styled and younger got the part.

She resumed working sporadically on television until the mid-1980s, including a television remake of her earlier success "A Letter to Three Wives". Her final film role was in "" in 1987. Her role as the neighbor of elderly sisters, played by and , brought Sothern her first and only Best Supporting Actress Academy Award nomination after 60 years in the business. However, she lost to .

Sothern was married to actor Roger Pryor from 1936 until , . Less than a week later, she married actor . The couple had one daughter, actress , before divorcing six years later. [ [http://www.imdb.com/name/nm0815433/bio IMDb bio for Ann Sothern] ]

In 1984, Sothern retired from acting and moved to , where she spent her remaining years.