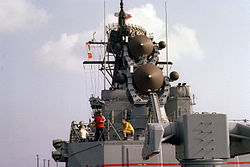 In 1983, the USS Mahan (DDG-42) was underway to test and evaluate the Terrier New Threat Upgrade (NTU) Combat System.

New Threat Upgrade (NTU) was a program to improve the anti-aircraft capability of Terrier and Tartar ships. It allowed the full use of newer Standard missiles (SM-2) and improved the interoperability of the radar and computer systems aboard the ships. The system allows the ships to which it was fitted to time share illumination radars for multiple missile interceptions in a manner similar to the Aegis Combat System. Some sources indicate that NTU ships were superior in some respects to Aegis ships of the same era, particularly in the area of user interface. They were inferior in that they could not deal with a saturation missile attack as well as Aegis vessels. The lower levels of funding available to the USN after the Cold War lead to most of the NTU ships being retired early, because of high cost of operation compared to newer vessels. As a result, the United States Navy no longer fields any NTU capable ships and most newly constructed ships have the Aegis weapon system.

The New Threat Upgrade to the Leahy class included massive remodeling of the ship from food service space rehabilitation to a main propulsion system overhaul.[1] Entire systems were removed and replaced, for example the AN/SPS-40 air-search radar was replaced with the AN/SPS-49 air-search radar. The upgrade was also quite expensive and the ships modified didn't serve much longer after the modification. For example, USS Gridley (CG-21) received NTU in 1991 at a cost of $55 million but was decommissioned in early 1994.

End of the Cold War

The Cold War ended shortly after the expensive New Threat Upgrade occurred and all ships that received the upgrades were decommissioned within six years of their upgrade. The USS Texas (CGN-39) was decommissioned during the upgrade.

The Navy of the Republic of Korea uses a NTU derived system for its Chungmugong Yi Sunshin class destroyers.

These classes had some of their units modified with the New Threat Upgrade.