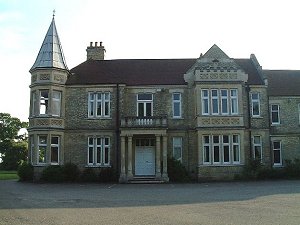 Soham Village College is a state with specialist Foundation and status in , , . It has around 1350 students, aged 11 to 16. It has a wide catchment area which does not include , although some students from Ely attend the school. The college is split over two adjacent sites, Beechurst (formerly a House) and Lodeside, built more recently.

The School is controlled by Cambridgeshire .

The College has its origins in the Soham Free School, established in 1686. The School became known as the Soham Grammar School from 1878 and occupied a site on Churchgate Street. In 1925 the Grammar School moved to Beechurst House, located on Sand Street. Beechurst House (built in 1901) was formerly the home of the late Newmarket , Charles Moreby. The took boys aged 11-18 from surrounding villages, and was also home to a few weekly s.

The name "Soham Village College" comes from the former style which was established in 1958. The original village college took boys and girls between the ages of 11 and 15, and was built on a 17 acre site next to the Soham Lode known as "Moat Fields". The village college system was the brainchild of Henry Morris, the at . The College was officially opened by the and MP Sir Edward Boyle, a former . Morris's emphasis was on a community based establishment, and indeed the College was equipped with a public library and a youth leader.

The present day Village College came into being in 1972 when the modern Village College merged with the long-established Grammar School. The merger was a direct result of the government raising the school-leaving age being raised to 16.

In 1993, the village college gained grant maintained status. This allowed for generous donations such as the funds donated in the mid 1990s by for the extension to the Mathematics and English departments (known as the Gibson Block in his honour).

In June 1998 the 'M Block' was opened by the late , which contains science, humanities, ICT and languages rooms.

The latest addition to the school was in 2005, with the building of a lift (or ) connecting the two stories of the Lodeside building to allow wheelchair access to the upper floor classrooms.

In the school's 2005 public exam results, out of 266 eligible students, 71% achieved at least 5 grade A-C s; the national average was 56.3% that year. But in the 2008 examinations, Soham Village College performed a lot worse than its traditional academic rival , by only achieving a 48% 5 A-C grades, to Witchford's 68%. The school still attracts many students from many schools both within and outside the catchment area. Many students have the opportunity to take extracurricular GCSEs, including Astronomy, Italian, Spanish and Polish.

However, students wishing to continue onto studies must change schools, usually attending establishments in nearby or .

The Village College holds many awards. Currently it is a with in technology and languages. The College has also been awarded the - Bronze Award, , , , , ICT Mark for Excellence in ICT. The school was a runner-up for the PEDRO award, which awards schools for thriving on ICT skills.

The students are also awarded many different forms of awards for various achievements by the school, such as outstanding attendance, awards for distinctive progression, and awards for extra curricular activities out of school such as sport. Scarlet or Tri-colour ties are awarded to students for outstanding achievement in sporting activities. There is also a new emerald tie that the school gives out to those who excel in the performing arts.

However, some students come from other nearby settlements outside of the catchment area including:
*
*Littleport
*Newmarket
*
*
*
*
*