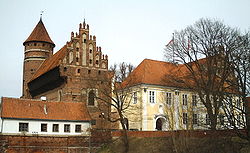 listen); Old Polish: Holstin; Old Prussian: Alnāsteini; Lithuanian: Olštynas) is a city in northeastern Poland, on the Łyna River. Olsztyn has been the capital of the Warmian-Masurian Voivodeship since 1999. It was previously in the Olsztyn Voivodeship (and in other units in 1945–75 and 1975–98). The city has county status.

In 1346 the old Prussian Warmian forest in the vicinity was cleared and a place was selected on the Alle now Łyna River for a new settlement. The Teutonic Knights began construction of Ordensburg castle in 1347 to protect against the Old Prussians, and the settlement of Allenstein was first mentioned the following year. The German name Allenstein meant a castle on the Alle River. It became known to Polish settlers as Olsztyn. The settlement received municipal rights from Johannes von Leysen on 31 October 1353, and the castle was completed in 1397. Allenstein was incorporated into the Kingdom of Poland during the Polish-Lithuanian-Teutonic War in 1410 and in 1414 during the Hunger War, but was returned to the monastic state of the Teutonic Knights after hostilities ended.

Allenstein joined the Prussian Confederation in 1440. It rebelled against the Teutonic Knights in 1454 upon the outbreak of the Thirteen Years' War and requested protection from the Polish Crown. Although the Teutonic Knights captured the town in the next year, it was retaken by Polish troops in 1463. The Second Peace of Thorn (1466) allocated Allenstein and the Bishopric of Warmia as part of Royal Prussia under the sovereignty of the Crown of Poland. From 1516–21, Nicolaus Copernicus lived at the castle as administrator of Allenstein and Mehlsack (Pieniężno); he was in charge of the defenses of Allenstein and Warmia during the Polish-Teutonic War of 1519–21.

Allenstein was sacked by Swedish troops in 1655 and 1708 during the Polish-Swedish wars, and the town was nearly wiped out in 1710 by epidemics of bubonic plague and cholera.

Allenstein was annexed by the Kingdom of Prussia in 1772 during the First Partition of Poland. A Prussian census recorded a population of 1,770 people, predominantly farmers, in Allenstein, which was administered within the Province of East Prussia. It was visited by Napoleon Bonaparte in 1807 after his victories over the Prussian Army at Jena and Auerstedt. In 1825 the city was inhabited by 1266 Poles and 1341 Germans[1] The German language Allensteiner Zeitung newspaper was first published in 1841. The town hospital was founded in 1867. 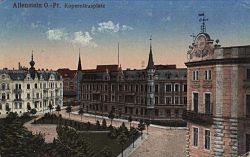 Allenstein became part of the German Empire in 1871 during the Prussian-led unification of Germany. Two years later the city was connected by railway to Thorn (Toruń). Its first Polish language newspaper, the Gazeta Olsztyńska, was founded in 1886. Allenstein's infrastructure developed rapidly: gas was installed in 1890, telephones in 1892, public water supply in 1898, and electricity in 1907. The city became the capital of Regierungsbezirk Allenstein, a government administrative region in East Prussia, in 1905. From 1818–1910 the city was administered within the East Prussia Allenstein District, after which it became an independent city.

Shortly after the outbreak of World War I, troops of the Russian Empire captured Allenstein in 1914, but it was recovered by the Imperial German Army in the Battle of Tannenberg. In 1920 during the East Prussian plebiscite, Allenstein voted to remain in German East Prussia instead of becoming part of the Second Polish Republic. The football club SV Hindenburg Allenstein played in Allenstein from 1921–45. After the Nazi seizure of power in 1933, Poles and Jews in Allenstein were increasingly persecuted. In 1935 the Wehrmacht made the city the seat of the Allenstein Militärische Bereich. It was the home of the 11th Infanterie Division, the 11th Artillery Regiment, and the 217th Infanterie Division.

In 1920 a plebiscite was held to determine whether the city's populace wished to remain in East Prussia or became part of Poland. In order to advertise the plebiscite, special postage stamps were produced by overprinting German stamps and sold from 3 April. One kind of overprint read PLÉBISCITE / OLSZTYN / ALLENSTEIN, while the other read TRAITÉ / DE / VERSAILLES / ART. 94 et 95 inside an oval whose border gave the full name of the plebiscite commission. Each overprint was applied to 14 denominations ranging from 5 Pf to 3 M.

On 12 October 1939, after the invasion of Poland that began World War II, the Wehrmacht established an Area Headquarters for Wehrkreis I that controlled the sub-areas of Allenstein, Lötzen (Giżycko) and Zichenau (Ciechanów). Beginning in 1939, members of the Polish-speaking minority, especially members of the Union of Poles in Germany, were deported to Nazi concentration camps.

Allenstein was plundered and burnt by the invading Soviet Red Army on 22 January 1945, as the Eastern Front reached the city. Allenstein's German population evacuated the region or were subsequently expelled. On 2 August 1945, the city was placed under Polish administration by the Soviets (according to the Potsdam Agreement) and officially renamed to Polish Olsztyn. In October, 1945 the German population of Olsztyn was expelled by Order of City Commanders of Olsztyn and ordered to assemble on 18 October at Karl Roensch Street barracks camp for transfer to Germany and in the case of non-compliance were to be put in a "punishment camp".

A tyre factory was founded in Olsztyn in 1967.

More than half of the forests occupying 21.2 % of the city area form a single complex of the Municipal Forest (1050 ha) used mainly for recreation and tourism purposes. Within the Municipal Forest area are situated two peat-land flora sanctuaries, Mszar and Redykajny. Municipal greenery (560 ha, 6.5 % of the town area) developed in the form of numerous parks, green spots and three cemeteries over a century-old. The greenery includes 910 monuments of nature and groups of protected trees in the form of beech, oak, maple and lime-lined avenues.

The city is situated in a lake region of forests and plains. There are 15 lakes inside the administrative bounds of the city (13 with areas greater than 1 ha). The overall area of lakes in Olsztyn is about 725 ha, which constitutes 8.25 % of the total city area. 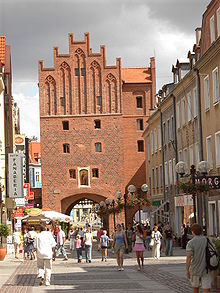 The Upper Gate (High Gate) in the Old Town 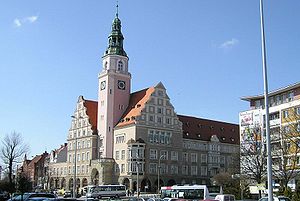 Olsztyn is divided into 23 districts:

Olsztyn's largest museum is the Museum of Warmia and Mazury. The city also has the Gazeta Olsztyńska House, Museum of Nature, and Museum of Sports. 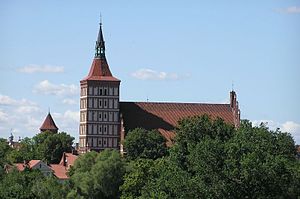 The history of the Castle in Olsztyn:

The castle was built between 1346–1353 and by then it had one wing on the north-east side of the rectangular courtyard. Access to the castle, lead from the drawbridge of the river Łyna (Alle), surrounded by a belt of defensive walls and a moat. The south-west wing of the castle was built in the 15th century, tower situated in the west corner of the courtyard, from the middle of 14th century, was rebuilt in the early 16th century and had a round shape on a square base and was 40 meters high. At the same time the castle walls were raised to a height of 12 meters and a second belt of the lower walls was built. The castle walls were partly combined with city walls, which made a castle looks like it had been a powerful bastion defending the access to the city. The castle was owned by Warmia Chapter, which until 1454 together with the Prince-Bishop of Warmia, was under military protection of the Teutonic Knights and their Monastic State of Prussia. The castle played a huge role in the Polish-Teutonic wars by then. After the Battle of Grunwald in 1410, the Poles took it after a few days siege. In the Thirteen Years' War (1454–66) it was jumping from hands to hands. The Knights threatened the castle and the town even in 1521, but the defense was very effective. They confined of the one, failed assault. Not many people know that with the history of the castle and the city of Olsztyn is connected with Nicolaus Copernicus. He prepared the defense of Olsztyn against the invasion of the Teutonic Knights. In the sixteenth century, there were two prince-bishops of Warmia that has stayed there: Johannes Dantiscus – "the first sarmatian poet, endowed with imperial laurel wreath for" Latin Songs "(1538, 1541) and Marcin Kromer, who formed with equal ease in Latin and Polish scientific and literary works (1580). Kromer consecrated the chapel of St. Anna, which was built in the south-west wing of the castle. In the course of time both wings of the castle lost military importance, which for residential purposes has become very convenient. In 1779 Prince-Bishop Ignacy Krasicki stopped here as well. After the Royal Prussian annexation of Warmia in 1772, the castle became the property of the state board of estates (War and Domain Chamber, Kriegs- und Domänenkammer). In 1845 the bridge over the moat was replaced by a dam connecting the castle with the city even better than before, therefore was dried. In 1901–1911 the general renovation of the castle was performed, however, several sections of the building were violated at the same time which they changed the original look of the castle e.g. putting on window frames in a cloister. The tower that was crowned in 1921 and again in 1926 in the halls of the castle, became a museum. The whole castle is a museum until today. In 1945 it became a residence of the Masurian Museum, which today is called the Museum of Warmia and Masuria. In addition to all that and the exhibition activities in Olsztyn, there are also popular events held within the frameworks of the Olsztyn Artistic Summer and so called “evenings of the castle” and “Sundays in the Museum”.

Death metal act Vader, regarded as one of the first Death metal bands from Poland.

The Michelin tyre company (former Stomil Olsztyn) is the largest employer in the region of Warmia and Masuria.[2] Other important industries are food processing and furniture manufacturing.

University of Warmia and Mazury

Members of the Sejm elected from Olsztyn constituency in 2005

Members of Senate elected from Olsztyn constituency in 2005 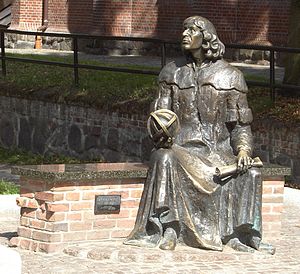 Statue of Nicolaus Copernicus in front of the castle 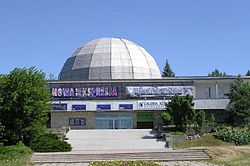 Olsztyn is twinned with:

Olsztyn belongs to the Federation of Copernicus Cities, an association of cities where Copernicus lived and worked, such as Bologna, Frombork, Kraków, and Toruń. The main office of the federation is situated at Olsztyn Planetarium and Astronomical Observatory, located on St. Andrew's Hill (143 m) in a former water tower erected in 1897.