Band on the Run (song)

Band on the Run (song) 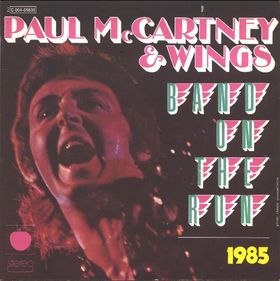 "Band on the Run" is the title song from and Wings' acclaimed "" album, one of McCartney's most ambitious and best-loved songs.

The song features prominently on every McCartney/Wings best-of compilation and in McCartney's live shows. The song was considered the best evidence that McCartney's had not deserted him after . It was the second of six number-one singles for the band on the .

It is composed of a three-part structure that revolves around the themes of escape and liberation. contributed the line in the middle section "If we ever get out of here." A part of the middle section would later be sampled by on his 1989 track "Cutting Rhythms", but had to be removed as permission was not given.

A of "Band on the Run" was recorded in 2007 by as their contribution to the "" . This album, commemorating 's 40th anniversary, features a cover version of a song released in each of the station's 40 years recorded by a modern-day band or solo artist; "Band on the Run" being the song selected to represent 1974.

On , McCartney was joined onstage by Foo Fighters lead singer Dave Grohl for a special performance in . Grohl played guitar and sang backing vocals on Band on the Run and then played drums on Beatles songs and .