The University of Calcutta (also known as Calcutta University) (Bengali: কলিকাতা বিশ্ববিদ্যালয়) is a public university located in the city of Kolkata (previously Calcutta), India, founded on 24 January 1857. It was the first multidisciplinary modern university in South Asia, as the oldest institution to have university status, Senate of Serampore College (University), Serampore[3] was granted freedom to grant degrees in theology only.

Within India it is recognized as a "Five Star University" and a "Centre with Potential for Excellence" by the University Grants Commission.[2][4] Within all state Universities all over India, Calcutta University occupies the top rank in terms of the highest number students who cleared the PhD entrance eligibility exam in Science conducted by Central Govt (CSIR-UGC NET) to became eligible to pursue PhD studies with full Govt. Scholarship.[5]

The University of Calcutta has so far produced 4 Nobelists, more than any other Indian university: Ronald Ross, Rabindra Nath Tagore, C. V. Raman and Amartya Sen.[6] The school was founded in 1857 while Lord Canning was the Governor General of India. Dr Fredrick John, the education secretary to the then British Government in India, first tendered a proposal to the British Government in London for the establishment of a university in Calcutta, similar to London University, to create an educated class that would help them rule India; at that time the plan failed to obtain the necessary approval. However, a proposal to establish two universities, one in Calcutta and the other in Bombay was later accepted in 1854 and the necessary authority was given. The Calcutta University Act came into force on 24 January 1857 and a 41-member Senate was formed as the policy making body of the university. When the university was first established it had a catchment area covering the area from Lahore to Rangoon (now in Myanmar) , and Ceylon, the largest of any Indian university.[6]

The first Chancellor and Vice-Chancellor of the Calcutta University were Governor General Lord Canning and Chief Justice of the Supreme Court, Sir James William Colvile, respectively.[7] In 1858, Joddu Nath Bose and Bankim Chandra Chattopadhyay became the first graduates of the university.[8] On 30 January 1858, the Syndicate of the Calcutta University started functioning.[8] The first meeting of the Senate was held in the Council room of the Calcutta Medical College. A temporary office of the university was started in a few rented rooms in Camac Street. For several years afterwards the meetings of the Senate and Syndicate were held in a room of the Writers' building. 244 candidates appeared for the first entrance examination of the university, held in March 1857 in the town hall of Calcutta. In 1862, a decision was taken by the Senate to construct for the university a building of its own. Accordingly, the historical Senate Hall was constructed at a cost of Rs. 2,52,221/- and inaugurated on 12 March 1873 by holding the convocation of the university.

In 1857 Nawab Jassa Singh Ahluwalia Government College[9] in Kapurthala , Punjab province of British India became one of the first colleges to be affiliated with University of Calcutta. Later many institutions came under its jurisdiction. Kadambini Ganguly and Chandramukhi Basu became the first female graduates of the country in 1882.[8] The Honourable Justice Gooroodas Banerjee became the first Indian Vice-Chancellor of University of Calcutta in the year 1890.[7] Sir Ashutosh Mukherjee was the Vice-Chancellor for four consecutive two-year terms (1906–1914) and a fifth two-year term (1921–23). 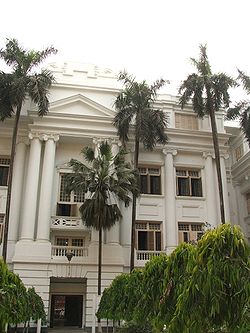 The university has several campuses spread over the city of Kolkata and its suburbs. The university also has many affiliated colleges spread over southern West Bengal. The main campus of the university, located on College Street, is spread over a small area of 2.7 acres (0.011 km2).[10] The main campus is also known as the Asutosh Siksha Prangan, and contains Darbhanga Building, Asutosh Building, Hardinge Building, and the Centenary Building.[11] The Rashbihari Siksha Prangan (also known as University College of Science and Technology or popularly Rajabazar Science College), located on Acharya Prafulla Chandra Road, houses several scientific and technological departments, e.g., pure and applied chemistry, pure and applied physics, applied mathematics, psychology, physiology, biophysics and molecular biology, to name but a few.[11] Taraknath Siksha Prangan (also known as University College of Science or Ballygunge Science College) on Ballygunge Circular Road in the southern part of the city houses the departments of agriculture, anthropology, biochemistry, botany, genetics and most notably geology among others.[11] Sahid Khudiram Siksha Prangan at Behala houses the department of Archeology, Business Management, Political Science, Sociology and others. Other campuses are Hazra Road Campus, University Press And Book Depot, B. T. Road Campus, Viharilal College of Home Science Campus, University Health Service, Haringhata Campus, Dhakuria Lakes (University Rowing Club) and University Ground and Tent at Maidan.[11] The university has a plan to create a "Techno Campus", to bring together the engineering and technical departments under one roof, in Salt Lake.[12]

Undergraduates enroll for a three-year program. Students are assigned to a major when they enter the university, and cannot change it later. Science and business disciplines are in high demand, as these fields are perceived to have better job opportunities. Most programs are organized by years, though some programs use a semester system. Most departments offer masters programs that are one or two years in duration. Research in the university is conducted in specialized institutes as well as individual departments, many of which have doctoral programs. 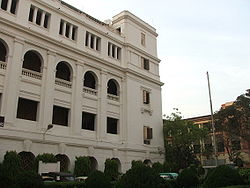 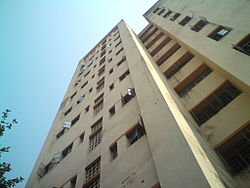 The university enjoys both national and international repute: 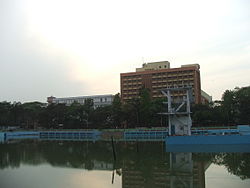 The Centenary Library at the College Street campus overlooking College Square. The library was built on the place of the previously existing University Senate Hall

Some of the notable initiatives associated with the university are:

The university has produced many scientists, engineers, world leaders and Nobel laureates and teachers. As the oldest university of Bengal and India, many students of the subcontinent came to this university in the nineteenth century. Nobel laureates who either studied or worked here include Ronald Ross, Rabindranath Tagore, Chandrasekhara Venkata Raman and Amartya Sen. The Academy Award winning director Satyajit Ray was also an alumnus of this university. So is the composer of the national song of India, Bankim Chandra Chattopadhyay. Some of the industrialists who studied in this university include Sir Rajen Mookerjee, Rama Prasad Goenka, Lakshmi Mittal, Aditya Birla and many other leading industrialists]. Scientists Jagadish Chandra Bose and his student Meghnad Saha, eminent Physicist and Mathematician Jamal Nazrul Islam were also students of this university.

An nationalist leader, former president of the Indian National Congress, co-founder of the Indian National Army, and Head of State of the Provisional Government of Free India, Netaji Subhas Chandra Bose studied in this university. Another President of the Indian National Congress and founder of the Banaras Hindu University, Madan Mohan Malaviya graduated in 1884 as a student of the University of Calcutta. Amongst the presidents of India who either studied or taught here were the first two presidents of the republic, Rajendra Prasad, and Sarvapalli Radhakrishnan. The current Vice President of India, Mohammad Hamid Ansari studied here, as did a former Deputy Prime Minister of India, Jagjivan Ram. Many governors of Indian states have studied here, including the first Indian governor of Bihar and Orissa, Lord Satyendra Prasanno Sinha of Raipur, Chandeshwar Prasad Narayan Singh, governor of the Punjab and Uttar Pradesh, and Banwari Lal Joshi, the former governor of Delhi, and Meghalaya, and current governor of Uttarakhand. The former ruler of the Indian princely state of Coochbehar, Maharaja Nripendra Narayan Bhupa Bahadur as well as Patayet Sahib Maharajkumar Bhoopendra Narayan Singh Deo of Saraikela were also alumni of this university. Amongst its former students are one Prime Minister and five Chief Ministers of Bengal, including A.K. Fazlul Huq, Bidhan Chandra Ray, Prafulla Chandra Sen, Siddhartha Shankar Ray, Jyoti Basu, and Buddhadeb Bhattacharya; two Chief Ministers of Assam, Bishnu Ram Medhi and Gopinath Bordoloi and one Chief Minister of Meghalaya, Brington Buhai Lyngdoh. Heads of state from other countries associated with the University of Calcutta include four Presidents of Bangladesh, Sheikh Mujibur Rahman, Mohammad Mohammadullah, Abu Sadat Mohammad Sayem, Abdus Sattar, two Prime Ministers of Bangladesh, Sheikh Mujibur Rahman, and Muhammad Mansur Ali, three Prime Ministers of Pakistan, Mohammad Ali Bogra, Hussein Shaheed Suhrawardy, and Nurul Amin, the first Premier of Burma under British rule, Ba Maw, the current and first President of Nepal, Ram Baran Yadav and the first democratically elected Prime Minister of Nepal, Bishweshwar Prasad Koirala.