Pretty Guardian Sailor Moon (美少女戦士セーラームーン, Bishōjo Senshi Sērā Mūn?, often abbreviated to PGSM[1]) is a Japanese tokusatsu television series in the Bishōjo Senshi Sailor Moon metaseries originally created by Naoko Takeuchi. It is produced by Toei, the same company that produces the Super Sentai Series and the Kamen Rider Series and of which their animation firm Toei Animation, produced the original anime version of Sailor Moon.

PGSM came out exclusively in Japan. It ran from October 4, 2003 to September 25, 2004, and was a retelling of Bishōjo Senshi Sailor Moon's first major story arc, albeit with considerable plot divergences.

A great evil, consisting of Queen Beryl, her four generals, and an amorphous evil power named Queen Metaria attempt to steal energy so that Beryl can take over the world.

Later in the series, Metaria and Sailor Moon each get too powerful to be reined in, and the conflict shifts to attempting to postpone the inevitable destruction of the planet Earth. (It looks like Earth is plunged into darkness and not actually destroyed per se, but the effect is the same.) 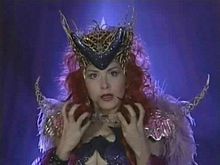 Queen Beryl as seen in the tokusatsu series, played by Aya Sugimoto.

Although Pretty Guardian Sailor Moon is a retelling of the first manga story arc, there are many differences that set it apart from the manga and anime. The storylines are more character-based and driven, focusing on the girls' civilian lives and their connection to the past more than on action sequences. While the first few episodes seemed directly based on anime and manga story lines, by the time Sailor Jupiter had arrived the show was starting to spin off in its own direction. Additionally, Usagi and Rei's relationship is closer in spirit to the manga; while they have their disagreements, it never gets to the heated level that it does in the anime.

One of the largest changes was to the character of Minako Aino, who, rather than being an ordinary girl among the other Senshi, is a famous pop idol. When introduced, she is fighting crime under the alias "Sailor V" (as in the other versions), and makes subtle reference to this double life in her music. Her most popular song, "C'est La Vie (Watashi no Naka no Koisuru Bubun)" (C'est la vie 〜私のなかの恋する部分?), is a Japanese pun: "Sailor V" (セーラーV, Sērā Bui?) and "C'est la vie" (セ・ラ・ヴィ, Se Ra Vi?) are pronounced nearly identically.

In addition to plotline changes, some updating has been done to minor elements of the series, making them more in line with modern culture. For example, in the original anime and manga, there were scenes involving Ami and a cassette tape. In the new version, the tape is replaced by a MiniDisc. Instead of a transformation pen and communicators, each Senshi is given a bracelet and a magical camera phone. Also, their secret hideout is not hidden in a video arcade, but rather in a magic karaoke room.

With the new adaptation of the show, certain characters were modified to give it freshness and originality. New aspects and forms include Sailor Luna, Dark Sailor Mercury, and Princess Sailor Moon. A new antagonist, Mio Kuroki, is also introduced.

Mio Kuroki (黒木ミオ, Kuroki Mio?), played by Alisa Yuriko Durbrow, is a strange and manipulative girl who joins Usagi's class at school. She is a fellow pop idol and thus has a rivalry with Minako Aino. She pretends to be Usagi's friend while doing all in her power to cause her sadness. However, Minako is aware of who she really is and suspects she's an agent working for the Dark Kingdom. She continuously warns Usagi to stay away from Mio because she suspects her motives were just to cause pain in her life and sees her true intentions. Because of Usagi's forgiving nature, she continually gives her extra chances, much to Minako's chagrin because she knows she can't be trusted. Mio soon becomes very envious of Usagi's closeness to Mamoru and fakes fainting in front of his motorcycle in order to kidnap him and take him to Queen Beryl. There, Mio taunts Mamoru, telling him that Beryl will kill him if he does not join the Dark Kingdom and become Beryl's lover.

Mio is revealed to be created from a part of Queen Beryl herself, apparently to do harm to Usagi. After kidnapping Mamoru, her main role is to keep an eye on him for Beryl. The only powers of her own she demonstrates are slight mind control powers, and teleportation, of both herself and others.

Toward the end of the series, Mio is apparently killed by Endymion/Metaria. However, she is somehow resurrected as the main villain of the "Special Act". Once again, she kidnaps Mamoru, this time wanting to marry him so they can rule a new Dark Kingdom as King and Queen. She is confronted and attacked by the Shitennou, forcing her to transform into a plant-like monster that makes quick work of her former allies. Ultimately, her final form is destroyed by the Senshi's combined powers, channeled through the Moon Stick in the Sailor Planet attack.

After her revival for the Special Act, she seems to gain new powers. She can repair objects, cause them to appear out of thin air, and create monsters from flames. She can also summon legions of pierrot, or clowns, to serve her and gather energy, even creating replicas of the Shitennou. Mio is also able to brainwash others and transform into a plant-like monster. At one point she interrupts a television broadcast to announce that she is taking over.

The popularity of the Sailor Moon musicals contributed to the decision to produce another series of Sailor Moon, and Takeuchi was more closely involved in the production than she was for the anime.[2]

A sequel to the series, set four years later, that portrays the wedding of Mamoru Chiba and Tsukino Usagi (which, in the anime, is first shown in the Dark Moon arc of Sailor Moon R). Before their nuptials they must do battle with Mio Kuroki who has been resurrected and claims to be the new queen of the Dark Kingdom. She kidnaps Mamoru and Usagi and intends to force Mamoru to marry her. However, the Shitennou are revived and help their master to defeat Mio's youma, Sword and Shield. Meanwhile, the Sailor Senshi, minus Sailor Mars who is hospitalized with injuries from battling Mio while in her civilian state, use the Moon Sword provided by Queen Serenity to restore their power, enabling them to transform and defeat Mio. The story ends with Usagi and Mamoru's wedding, and Motoki and Makoto's engagement. This act is an hour long, twice as long as all the other acts.

The last special made for the series is a prequel of sorts that leads directly to the first episode. In it we see how Minako Aino met Artemis and became Sailor V on Christmas. She must use her newfound powers to foil a stage magician/jewel thief called Q.T. Kenko and his Killer Girl assistants. Meanwhile Usagi and her friends decide to dress in their own homemade sailor fuku in order to scare the thieves away from the jewelry store owned by Naru Osaka's mother, (Usagi as Sailor Rabbit, Naru as Sailor N, and their other friends, Kanami and Momoko as sailors K and M) only for Usagi to get kidnapped by Kenko. The actors who portray the Shitennou are featured as the inexperienced police officers group self-dubbed the "Police Shitennou" for comic relief: Captain Kuroi (Kunzite), Officer Akai (Nephrite), Officer Shiroi (Zoisite), and female Officer Hanako (Jadeite). The story ends with Luna coming to Earth, feeling the burn of hitting the atmosphere, in order to give Usagi her powers.

Act Zero also comes with two mini-episodes. Each one is approximately five minutes long and tells a quick short story. Hina Afterward shows what happened to Hina after breaking off her engagement with Mamoru Chiba. Tuxedo Mask's Secret Birth shows the origin of the Tuxedo Mask persona. It includes a joke-henshin sequence in which, rather than transforming magically, he pulls his clothes on with dramatic flair.

A quick video hosted by Luna, Sailor Jupiter and Sailor Moon, that instructed the viewer how to perform the dances from different songs from PGSM. The dances included were for the songs "Romance" and "Here We Go! -Shinjiru Chikara-" (Here We Go!-信じるチカラ-?) Also demonstrated were "C'est La Vie ~ Watashi no Naka no Koi suru Bubun" (C'est la Vie〜私のなかの恋する部分, Seito ra Bui ~Watashi no Naka no Koi suru Bubun?) and "Kirari*Sailor Dream!" (キラリ☆セーラードリーム!, Kirari Sērā Dorīmu!?) although no formal instructions were given on how to dance to them.

A Special Live Event occurred on May 2, 2004 at Yomiuri Hall. This Special Event was held for the 1,000 winners of the Sailormoon Campaign (a contest held earlier in the year, in which viewers had to send in UPC symbols to enter). The event combined musical performances, in which the cast members sang and danced to songs from the PGSM soundtrack, and a dramatic storyline with spoken dialogue, in which the Senshi had to stop the Shitennou from stealing the energy of the audience members. The show was recorded and released on DVD. The DVD also included bonus behind-the-scenes footage of the performance and interviews with the cast members.

Keiko Han and Chieko Kawabe had been involved with Sailor Moon previously: Keiko reprise their roles as Luna's (in cat form) voice in the anime and Chieko previously played Sailor Mercury in the Sailor Moon Musicals or SeraMyu.

The cloaked youma which appeared starting in ep. 37 are redesigned Golem Hei from the 1992 Super Sentai series Kyōryū Sentai Zyuranger (which were adapted to the Putty Patrol in Mighty Morphin Power Rangers).[citation needed]

Keiko Kitagawa (Rei) also made an appearance in The Fast and the Furious: Tokyo Drift, as Reiko.

The broadcast originated from Chubu-Nippon Broadcasting. Another 28 television stations in Japan, mostly those affiliated with Japan News Network, retransmitted the series,[citation needed] though some of them were weeks behind the TBS schedule because they started airing the series late.

There are several radio programs called "DJ Moon" based on the show that originated from Chubu-Nippon Broadcasting radio and were broadcast on other radio networks in Japan. The shows were a combination of a radio drama and promotional tool for the TV series, often foreshadowing upcoming events. These shows were later sold on CD.

The broadcast's ratings were not as high as those of the original show. The show had a high start, but then the ratings slid. They picked up in January 2004 and then again at the end of the series.

In addition to the broadcast television show, there was also a stage musical performance, Kirari Super Live! by characters on the show. Some footage from the filming of the stage show was used in the television broadcast. A special limited-edition promotional video, Super Dance Lesson, was available for purchase only through order forms found in the magazines Youchien, Mebae, and Shougaku Ichinensei in July 2004.[5]