Chicken the most common type of poultry in the world,[1] and is prepared as food in a wide variety of ways, varying by region and culture.

The modern chicken is a descendant of Red Junglefowl hybrids along with the Grey Junglefowl first raised thousands of years ago in the northern parts of the Indian subcontinent.[2]

Chicken as a meat has been depicted in Babylonian carvings from around 600 BC.[3] Chicken was one of the most common meats available in the Middle Ages. It was widely believed to be easily digested and considered to be one of the most neutral foodstuff.[citation needed] It was eaten over most of the Eastern hemisphere and a number of different kinds of chicken such as capons, pullets and hens were eaten. It was one of the basic ingredients in the so-called white dish, a stew usually consisting of chicken and fried onions cooked in milk and seasoned with spices and sugar.

Chicken consumption in the US increased during World War II due to a shortage of beef and pork.[4] In Europe, consumption of chicken overtook that of beef and veal in 1996, linked to consumer awareness of Bovine spongiform encephalopathy or B.S.E.[5]

Modern varieties of chicken such as the Cornish Cross, are bred specifically for meat production, with an emphasis placed on the ratio of feed to meat produced by the animal. The most common breeds of chicken consumed in the US are Cornish and White Rock.[6]

Chickens raised specifically for food are called broilers. In the United States, broilers are typically butchered at a young age. Modern Cornish Cross hybrids, for example, are butchered as early as 8 weeks for fryers and 12 weeks for roasting birds.

Capons (castrated cocks) produce more and fattier meat. For this reason, they are considered a delicacy and were particularly popular in the Middle Ages. 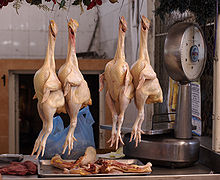 Chicken in a public market

Chicken meat contains about two to three times as much polyunsaturated fat than most types of red meat when measured as weight percentage.[8]

Chicken generally includes low fat in the meat itself (castrated roosters excluded), however it is highly concentrated on its skin, which should be avoided when low intake of fat is necessary.

Cooking method is highly related to health issues related to chicken, with steam cooking with skin removed being considered one of the healthiest, and fried with trans fats one of the worst.

However according to a 2006 Harvard School of Public Health study of 135,000 people, people who ate grilled skinless chicken 5 or more times a week had a 52 percent higher chance of developing bladder cancer compared to people who didn’t. However, such strong associations were not found in individuals regularly consuming chicken with skin intact.[9]

A recent study by the Translational Genomics Research Institute showed that nearly half (47%) percent of the meat and poultry in US grocery stores were contaminated with S. aureus, with more than half (52%) of those bacteria resistant to antibiotics.[10] 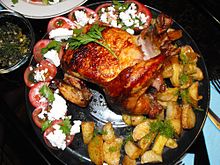 Juvenile chickens, of less than 28 days of age at slaughter in the United Kingdom are marketed as poussin. Mature chicken is sold as small, medium or large.

Whole mature chickens are marketed in the United States as fryers, broilers, and roasters. Fryers are the smallest size (2.5-4 lbs dressed for sale), and the most common, as chicken reach this size quickly (about 7 weeks). Most dismembered packaged chicken would be sold whole as fryers. Broilers are larger than fryers. They are typically sold whole. Roasters, or roasting hens, are the largest chickens commonly sold (3-5 months and 6-8 lbs) and are typically more expensive. Even larger and older chickens are called stewing chickens but these are no longer usually found commercially. The names reflect the most appropriate cooking method for the surface area to volume ratio. As the size increases, the volume (which determines how much heat must enter the bird for it to be cooked) increases faster than the surface area (which determines how fast heat can enter the bird). For a fast method of cooking, such as frying, a small bird is appropriate: frying a large piece of chicken results in the inside being undercooked when the outside is ready.

Chicken is also sold in dismembered pieces. Pieces may include quarters, or fourths of the chicken. A chicken is typically cut into two leg quarters and two breast quarters. Each quarter contains two of the commonly available pieces of chicken. A leg quarter contains the thigh, drumstick and a portion of the back; a leg has the back portion removed. A breast quarter contains the breast, wing and portion of the back; a breast has the back portion and wing removed. Pieces may be sold in packages of all of the same pieces, or in combination packages. Whole chicken cut up refers to either the entire bird cut into 8 individual pieces. (8-piece cut); or sometimes without the back. A 9-piece cut (usually for fast food restaurants) has the tip of the breast cut off before splitting. Pick of the Chicken, or similar titles, refers to a package with only some of the chicken pieces. Typically the breasts, thighs, and legs without wings or back. Thighs and breasts are sold boneless and/or skinless. Dark meat (legs, drumsticks and thighs) pieces are typically cheaper than white meat pieces (breast, wings). Chicken livers and/or gizzards are commonly available packaged separately. Other parts of the chicken, such as the neck, feet, combs, etc. are not widely available except in countries where they are in demand, or in cities that cater to ethnic groups who favor these parts.

There are many fast food restaurant chains on both a national and global scale that sell exclusively or primarily in poultry products including KFC (global), Red Rooster (Australia), Hector Chicken (Belgium) and CFC (Indonesia). Most of the products on the menu in such eateries are fried or breaded and are served with french fries. 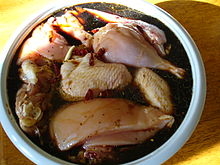 Marination of chicken for grilling. 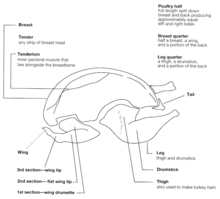 The USDA classifies cuts of poultry in a manner similar to beef.

Raw chicken can be frozen for up to two years without significant changes in flavor or texture. Chicken is typically eaten cooked as when raw it often contains Salmonella. Raw or rare chicken dishes appear in Ethiopian cuisine and Japanese cuisine[citation needed].

Chicken can be cooked in many ways. It can be made into sausages, skewered, put in salads, grilled, breaded and deep-fried, or used in various curries. There is significant variation in cooking methods amongst cultures. Historically common methods include roasting, baking, broasting, and frying. Today, chickens are frequently cooked by deep frying and prepared as fast foods such as fried chicken, chicken nuggets, chicken lollipops or buffalo wings. They are also often grilled for salads or tacos.

Chickens often come with labels such as "roaster", which suggest a method of cooking based on the type of chicken. While these labels are only suggestions, ones labeled for stew often do not do well when cooked with other methods.[11]

Some chicken breast cuts and processed chicken breast products include the moniker "with Rib Meat." This is a misnomer, as it is the small piece of white meat that overlays the scapula, and is removed with the breast meat. The breast is cut from the chicken and sold as a solid cut, while the leftover breast and true rib meat is stripped from the bone through mechanical separation for use in chicken franks, for example. Breast meat is often sliced thinly and marketed as chicken slices, an easy filling for sandwiches. Often, the tenderloin (pectoralis minor) is marketed separately from the breast (pectoralis major). In the US, "tenders" can be either tenderloins or strips cut from the breast.

Chicken bones are hazardous to health as they tend to break into sharp splinters when eaten, but they can be simmered with vegetables and herbs for hours or even days to make chicken stock.

In Asian countries it is possible to buy bones alone as they are very popular for making chicken soups, which are said to be healthy. In Australia the rib cages and backs of chickens after the other cuts have been removed are frequently sold cheaply in supermarket delicatessen sections as either "chicken frames" or "chicken carcasses" and are purchased for soup or stock purposes.

Raw chicken maintains its quality longer in the freezer as compared to when having been cooked because moisture is lost during cooking.[12] There is little change in nutrient value of chicken during freezer storage.[12] For optimal quality, however, a maximal storage time in the freezer of 12 months is recommended for uncooked whole chicken, 9 months for uncooked chicken parts, 3 to 4 months for uncooked chicken giblets, and 4 months for cooked chicken.[12] Freezing doesn't usually cause color changes in poultry, but the bones and the meat near them can become dark. This bone darkening results when pigment seeps through the porous bones of young poultry into the surrounding tissues when the poultry meat is frozen and thawed.[12] It is safe to freeze chicken directly in its original packaging, however this type of wrap is permeable to air and quality may diminish over time. Therefore, for prolonged storage, it is recommended to overwrap these packages.[12] It is recommended to freeze unopened vacuum packages as is.[12] If a package has accidentally been torn or has opened while food is in the freezer, the food is still safe to use, but it is still recommended to overwrap or rewrap it.[12] Chicken should be from other foods, so if they begin to thaw, their juices won't drip onto other foods.[12] If previously frozen chicken is purchased at a retail store, it can be refrozen if it has been handled properly.[12] Chicken can be cooked or reheated from the frozen state, but it will take approximately one and a half times as long to cook, and any wrapping or absorbent paper should be discarded.[12]

Use of Roxarsone in chicken production

In many factory farms, chickens are routinely administered with the feed additive Roxarsone, a relatively benign organoarsenic compound which partially decomposes into inorganic arsenic compounds in the flesh of chickens, and in their feces, which are often used as a fertilizer.[13] The compound is used to control stomach pathogens and promote growth. A Consumer Reports study in 2004 reported finding "no detectable arsenic in our samples of muscle" but found "A few of our chicken-liver samples has an amount that according to EPA standards could cause neurological problems in a child who ate 2 ounces of cooked liver per week or in an adult who ate 5.5 ounces per week." However, the amounts found in these livers averaged to 460 part per billion; an amount still less than the 2,000 parts per billion limit set by the FDA.[14] The FDA has found there to be no significant impact for the use of Roxarsone in the production of chicken, turkey or swine.[15]