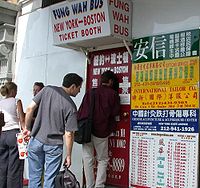 Chinatown bus lines are discount intercity bus services that have been established in the Chinatown communities of the East Coast of the United States since 1998. Similar Chinese American-run bus services are cropping up on the West Coast. The buses have been subject to controversy because of safety issues, possible ties to criminal gangs, and two fatal accidents in March 2011.[1] 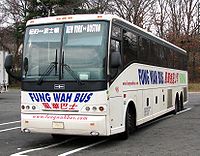 The first company to offer such services was the Fung Wah Bus, which began routes between New York City and Boston in 1998.[2] The bus services originally transported ethnic Chinese restaurant workers to and from jobs in Boston, Atlantic City, Washington and other cities. As word of them spread, they became more popular with non-Chinese bargain-hunting travellers, many of them young. [3] Now, some bus lines are also used to transport large groups of mainly Chinese and Vietnamese immigrants to and from casinos such as Foxwoods and Mohegan Sun, which are located in Connecticut. These gambling buses built upon the popularity of older bus routes to Atlantic City that also targeted Asian American customers.[4]

Given their relatively competitive fares to the mainstream Greyhound Lines, it has become popular among non-Chinese customers as well, especially students. Recently, competition has come from Megabus and DC Trails, under the Washington Deluxe and Vamoose brands, along with other companies.[5] Incidentally, two of the operations were recently brought under Megabus operation, with the purchase of Eastern Shuttle and Today's Bus. 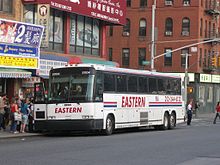 Increasing popularity has also led to increasing regulatory interest. In September 2004, the city of Boston required all regularly scheduled intercity bus services to operate exclusively to and from the South Station transportation terminal. Steven Bailey of The Boston Globe suggested that the move was motivated by Peter Pan's and Greyhound's interest in maintaining their monopoly on the New York-Boston bus route, and Timothy Shevlin, executive director of the state Department of Telecommunications and Energy, said, "The big dog out there, Peter Pan, is dead set against Chinatown bus lines. They don't want that kind of competition." A complication with this arrangement was that the South Station bus terminal has only 25 gates (along with two departure gates), all of which were used at the time until other companies left.[6] Since that time, however, Coach USA was able to negotiate with the MBTA to use a loop that it owns (outside of city control) by the Back Bay station for its Megabus Boston service (the South Station terminal does not currently fit double-decker buses that are the normal fare of Megabus).

The bus lines have drawn scrutiny from law enforcement authorities for possible connections to Chinese organized crime gangs. In 2003 and 2004, a number of bus arsons, driver assaults, and murders in New York City were linked to the possible infiltration of Asian organized crime gangs into the industry.[7][8]

Among the crimes believed to have been associated with gang activity were a fatal stabbing and shooting incident in 2003. The shooting, on a busy street, may have been in retaliation for a driver having backed his bus into a rival. In retaliation for the shooting, two buses were set ablaze in 2004. There was another stabbing in 2004.[3]

In another incident tied to criminal gangs, one man tied to the Chinatown bus lines was shot dead in a Flushing, Queens bar in June 2004. A bystander was killed and another was shot in the leg. The accused shooter was arrested in Toronto in 2011 and extradited to the United States.[3]

In 2008, the New York Post linked the "Banya Organization" gang with Chinatown buses. The gang allegedly inflicted brutal beatings to muscle in on private bus and van companies. The companies involved were not identified.[9] 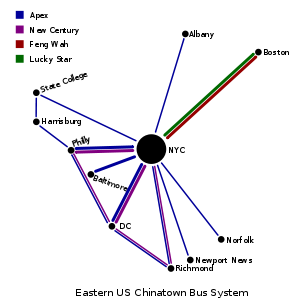 Schematic of the main Eastern US Chinatown Bus Lines

In addition to New York City and Boston, several bus line companies also link to the Chinatowns of Philadelphia, Washington, D.C., Baltimore, Doraville in the Atlanta, Georgia area, and other cities. On the West Coast, buses link the Chinatowns in the San Francisco Bay Area, Silicon Valley, Los Angeles Chinatown and the San Gabriel Valley, and the Las Vegas Chinatown and casinos.

The Appalachian extensions of these lines tend to offer less of a price advantage: In August 2006, one-way fares from New York to Pittsburgh on the Chinese-owned All State were $35 compared with $45 advance through Greyhound Lines, while tickets from State College, Pennsylvania to New York were $35, compared to $46 for Greyhound.[2] 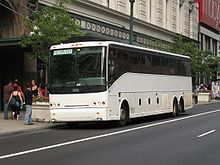 The fleet used by various Chinabus companies can vary greatly from new coaches to older, pre-owned coaches, and with a few notable exceptions such as Eastern Shuttle and routes to Boston, not all units are branded with the operator name other than required USDOT markings, as shown to the right.

With the exception of Eastern Shuttle and services to Boston (all of which use clearly marked buses), many Chinatown bus companies use wet leases to provide overflow capacity during the weekend. Some smaller companies use wet leases to provide their core capacity.[10] Typically, a bus (and a driver) would be chartered from a tour bus operator, a practice also used by mainstream companies such as Greyhound Lines during peak service. 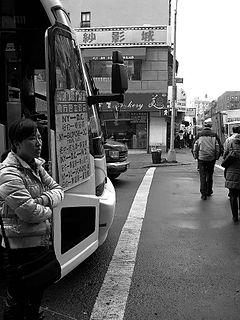 Chinatown buses run express, usually making no stops between the departure and destination points. This typically results in shorter travel times. The trip from State College, Pennsylvania to New York City takes about four hours on the Chinatown bus, compared to more than seven hours on Greyhound.

Often, ticket booths are walk-up windows on the street, or are located inside restaurants and bakeries throughout a given Chinatown community. Some lines even simply collect cash-payment after passengers have boarded the bus. However, tickets are often sold online, either by the bus companies themselves or by portals and print-outs of confirmation emails are used as tickets.[citation needed]

Except in Boston, the lines rarely use stations of their own. Passengers are usually directed to wait along a given curbside for the arrival of the bus, although many companies offer waiting areas at or near the pickup points. Several bus stops are also near major hotels and in the parking areas of major Chinese supermarkets. In New York, several bus lines pick up passengers on a stretch of Forsyth Street at the foot of the Manhattan Bridge. Beginning in 1998, when the New York City Department of Transportation marked the strip a bus layover area, the sidewalk between Division Street and East Broadway, has served as a de facto terminal for the Chinatown buses.[11]

Because of the informal "no-frills" nature of Chinatown bus service, disabled passengers have complained about the lack of handicapped access.[12][dead link]

New York to Boston Chinatown buses generally use the Massachusetts Turnpike from Boston to I-84, and thence follow I-84 to I-91 to I-95. As I-95 approaches New York, several routings are possible depending on the traffic situation.[citation needed] Some drivers use the Throgs Neck Bridge to reach the Long Island Expressway, thence to the Brooklyn-Queens Expressway, and then Manhattan Bridge to Canal St. Other drivers use the Whitestone Bridge.[original research?] Most drivers use the Triborough Bridge when traffic is not congested, and reach the Brooklyn-Queens Expressway via Astoria Blvd.

Some 'Casino Buses' use I-395 to make an intermediate stop at Foxwoods Resort Casino between Mass Turnpike and I-95.

The buses have been involved in numerous accidents over the years. Among them were a crash on Interstate 95 in the Bronx in March 2011 in which 15 persons were killed and more than 20 injured, and another crash that month on the New Jersey Turnpike in which the driver was killed and 40 injured, two critically. The New York Police Department subsequently cracked down on mechanically defective buses, taking six off the road for inadequate brake air pressure, steering violations and missing driver paperwork.[1]

Other accidents have included:

After the August 2005 incident, the Massachusetts Department of Telecommunications and Energy instituted a policy of holding three surprise inspections per month on all bus companies that leave South Station in Boston. New York senator Chuck Schumer proposed a four-point federal plan that includes surprise inspections and creating a national safety standard for bus operators. New York may institute a similar policy; however, inspections would be difficult in New York because the buses do not all leave the city from the same location.[25]