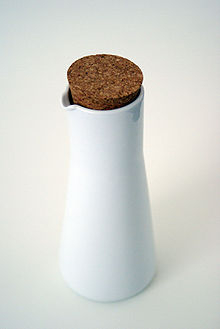 A jug with a cork bung.

A bung is truncated cylindrical or conical closure to seal a container, such as a bottle, tube or barrel. Unlike a lid which encloses a container from the outside without displacing the inner volume, a bung is partially inserted inside the container to act as a seal. The lids for safety overpacks for 55 gallon drums sometimes may have a bung built in[1] for access of the contents of the container. These may be referred to as fuel bungs.

A rubber stopper is sometimes called a rubber bung, and a cork stopper is called a cork. Sometimes bung stoppers used for wine bottles are referred to as "corks", even though made from another material.

The most common every-day example of a bung is the stopper of a wine bottle. Bungs are used to seal the bunghole of barrels. Other bungs, particularly those used in chemical barrels, may be made of metal and are screwed into place via threading.

In chemistry, bungs are usually made of hardened rubber. Some chemistry bungs may also include one or more holes so a glass tube or laboratory funnel may be inserted through the bung and into the container or another piece of apparatus. The rubber bung may be used to seal a flask because the user may require the contents to be mixed via shaking the flask or may require that the contents be kept inside the flask and prevented from leaking out. In all cases, the bung keeps the experimentation environment completely sealed so that liquids or gases cannot escape.

Apart from self-made glassware, rubber bungs are rarely used now. They have been supplanted by laboratory glassware which come with standard ground glass joints which allow the pieces to be fitted together easily. Ground glass joints are also much more resistant to solvents and chemicals used.

Ground glass stoppers and rubber stoppers are commonly used with laboratory glassware, mainly because of their nonreactivity. Some stoppers used in labs have holes in them to allow the insertion of glass or rubber tubing. This is often used when a reaction is taking place in the flask or test tube and the byproduct or result of the reaction is desired to be collected. For instance, if one were to boil water in a test tube and wanted to collect the water vapor, one could seal the test tube with a stopper with holes in it. With tubing inserted into the hole(s), when the tube is heated, water vapor will rise through the hole, make its way through the tubing, and into the collection chamber of choice. The water vapor would not be able to escape into the air, because the stopper and the tubing, if set up correctly, would be airtight.

A phoedelia is a particular type of stopper, usually made of glass and decorated with a cross, used with ecclesiastical cruets.

Plastic bungs are commonly used to stop the air leaking from the lower parts of an air-bed. This type of bung is commonly made in two parts; the plastic outer screw on cap and the inner rubber bung used to seal the hole.