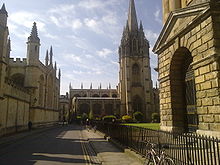 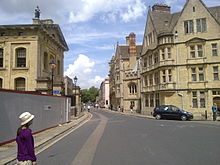 Catte Street, from outside the Bodleian Library, looking north towards Parks Road.

Catte Street is a historic street in central Oxford, England.[1][2]

Catte Street runs north-south, continuing as Parks Road to the north (at a junction with Broad Street and Holywell Street). The street passes along the eastern side of Radcliffe Square and forms a junction with the High Street to the south.

At the northern end to the west is the Clarendon Building on Broad Street, with the Sheldonian Theatre nearby. Just to the south is the Bodleian Library. To the east are the Modern History Faculty (formerly the Indian Institute building), Oxford's Bridge of Sighs in New College Lane and Hertford College.

Further south to the east is All Souls, an Oxford college with fellows but no undergraduate students. To the west at the southern end are the Radcliffe Camera and University Church of St Mary the Virgin, the main church of the University, on the High Street.

The street has been pedestrianised as a pavement at the south by the junction with the High Street since 1973.

The name of this street was recorded as Kattestreete in the early 13th century, as Mousecatcher's Lane in 1442, and as Cat Street in the 18th century.[1] In the mid-19th century it became Catherine Street. However, there was another street of this name in east Oxford and in 1930 the City Council changed the name to Catte Street, using a 15th-century spelling.

Originally this street road used to lead northwards as far as New College Lane, where the city wall blocked its way. The road north from here has become part of Catte Street, although the Modern History Faculty still gives its address as Broad Street nearby.

In the mid-13th century the illuminator William de Brailes owned property, and presumably had his workshop, next to St Mary's.