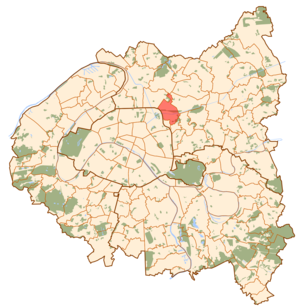 Pantin is a commune in the northeastern suburbs of , . It is located 6.4 km. (4.0 miles) from the center of Paris. It is one of the most densely populated municipalities in . Its post code is 93500.

Pantin was once the site of 's operations. Pantin was portrayed in the award-winning French movie "" (French title: "Tchao Pantin") (1983), starring French .

Pantin borders the Paris inner ring road (périphérique) and is traversed by national motorways 2 & 3, as well as the Paris-Strasbourg railway line and the Ourq canal.

The name Pantin was recorded for the first time in 1067 as "Pentini", perhaps from the Roman Pentinus, a variant of Pantaenus or Repentinus, but this etymology is not certain.

On , , the city of Paris was enlarged by annexing neighboring communes. On that occasion, a small part of the commune of Pantin was annexed to Paris.

By 1875, the Ourq canal and new railway lines served to divide the town into two parts- the "Village" and the "Quatre Chemins".

The recent construction of a science park along the on the former site of city abattoirs has improved pedestrian access to Paris, as well as encouraging urban regeneration in Pantin itself. A key policy discussed since the 2008 mayoral election has been the possibility of integrating the ten banlieue towns of , , , , Pantin, , , , and into an "intercommune" of around 440,000 people. This new municipality could be created as early as January 2010.

The current mayor of Pantin is Bertrand Kern of the Partie Socialiste (PS). Kern was recently re-elected for a second 6-year mayoral term.

Finally Pantin is served by numerous bus lines (151,152,249,148). Outside the hours of normal public transport the town is served by the N13 and N142 Noctilien night bus services with stops outside the Centre de la Danse, the Mairie and Rue Delizy.