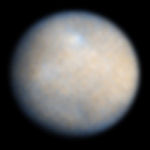 Ceres has been proposed[1][2] as one possible target for human colonization in the inner Solar System.

Ceres is a dwarf planet in the asteroid belt, comprising about one third of the mass of the whole belt and being the sixth largest body in the inner Solar System by mass and volume. It has a round planet-like shape, and a surface gravitational acceleration about 2.8% that of Earth. It has a surface area approximately 1.9% of Earth's dry land, roughly equivalent to the area of Argentina. Observations indicate that it contains large amounts of water ice,[3][4] about one-tenth of the total water in Earth's oceans. The solar irradiance of 150 W/m2 (in aphelion), which is nine times smaller than that on Earth, is still high enough for solar-power facilities.[1] The upcoming Juno mission to Jupiter, for example, will be relying on solar power in a location further out from the Sun than Ceres.

Being the largest body in the asteroid belt, Ceres could become the main base and transport hub for future asteroid mining infrastructure,[1] allowing mineral resources to be transported further to Mars, the Moon and Earth.

Its colonization also could become a step on the way to the colonization of the objects in the outer Solar System, such as satellites of Jupiter. Because of its small escape velocity combined with large amounts of water ice, it also could serve as a source of water, fuel and oxygen supply for ships going through and beyond the asteroid belt.[1]

The establishment of a permanent colony on Ceres might precede colonization of the Moon or Mars since the far deeper gravity wells of those bodies add dramatically to the cost and risk of colonization. As a consequence of a greater semi-major axis, Ceres has much more frequent launch windows to/from Cislunar space than to/from Mars (the synodic period is 1 year 3.3 months compared to 2 years 1.6 months), and a Hohmann transfer takes 1 year and 3.5 months.[5] It is more energy-efficient to transport resources from the Moon or Mars to Ceres, than from Earth. In fact, transportation from Mars or the Moon to Ceres is more energy-efficient than even transportation from Earth to the Moon.[6] 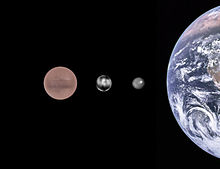