In mathematics a combination is a way of selecting several things out of a larger group, where (unlike permutations) order does not matter. In smaller cases it is possible to count the number of combinations. For example given three fruit, say an apple, orange and pear, there are three combinations of two that can be drawn from this set: an apple and a pear; an apple and an orange; or a pear and an orange. More formally a k-combination of a set S is a subset of k distinct elements of S. If the set has n elements the number of k-combinations is equal to the binomial coefficient

which can be written using factorials as

, and which is zero when k > n. The set of all k-combinations of a set S is sometimes denoted by

With large sets, it becomes necessary to use mathematics to find the number of combinations. For example, a poker hand can be described as a 5-combination (k = 5) of cards from a 52 card deck (n = 52). The 5 cards of the hand are all distinct, and the order of cards in the hand does not matter. There are 2,598,960 such combinations, and the chance of drawing any one hand at random is 1 / 2,598,960. 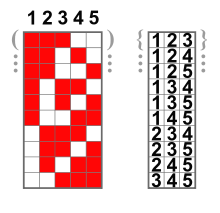 The number of k-combinations from a given set S of n elements is often denoted in elementary combinatorics texts by C(n, k), or by a variation such as

(the latter form is standard in French, Russian, and Polish texts). The same number however occurs in many other mathematical contexts, where it is denoted by

; notably it occurs as coefficient in the binomial formula, hence its name binomial coefficient. One can define

for all natural numbers k at once by the relation

from which it is clear that

for k > n. To see that these coefficients count k-combinations from S, one can first consider a collection of n distinct variables Xs labeled by the elements s of S, and expand the product over all elements of S:

it has 2n distinct terms corresponding to all the subsets of S, each subset giving the product of the corresponding variables Xs. Now setting all of the Xs equal to the unlabeled variable X, so that the product becomes (1 + X)n, the term for each k-combination from S becomes Xk, so that the coefficient of that power in the result equals the number of such k-combinations.

Binomial coefficients can be computed explicitly in various ways. To get all of them for the expansions up to (1 + X)n, one can use (in addition to the basic cases already given) the recursion relation

For determining an individual binomial coefficient, it is more practical to use the formula

When k exceeds n/2, the above formula contains factors common to the numerator and the denominator, and canceling them out gives the relation

This expresses a symmetry that is evident from the binomial formula, and can also be understood in terms of k-combinations by taking the complement of such a combination, which is an (n − k)-combination.

Finally there is a formula which exhibits this symmetry directly, and has the merit of being easy to remember:

where n! denotes the factorial of n. It is obtained from the previous formula by multiplying denominator and numerator by (n − k)!, so it is certainly inferior as a method of computation to that formula.

From the above formulas follow relations between adjacent numbers in Pascal's triangle in all three directions:

Together with the basic cases

, these allow successive computation of respectively all numbers of combinations from the same set (a row in Pascal's triangle), of k-combinations of sets of growing sizes, and of combinations with a complement of fixed size n − k.

As a concrete example, one can compute the number of five-card hands possible from a standard fifty-two card deck as:

Another alternative computation, almost equivalent to the first, is based on writing

Using the symmetric formula in terms of factorials without performing simplifications gives a rather extensive calculation:

One can enumerate all k-combinations of a given set S of n elements in some fixed order, which establishes a bijection from an interval of

integers with the set of those k-combinations. Assuming S is itself ordered, for instance S = {1,2, ...,n}, there are two natural possibilities for ordering its k-combinations: by comparing their smallest elements first (as in the illustrations above) or by comparing their largest elements first. The latter option has the advantage that adding a new largest element to S will not change the initial part of the enumeration, but just add the new k-combinations of the larger set after the previous ones. Repeating this process, the enumeration can be extended indefinitely with k-combinations of ever larger sets. If moreover the intervals of the integers are taken to start at 0, then the k-combination at a given place i in the enumeration can be computed easily from i, and the bijection so obtained is known as the combinatorial number system. It is also known as "rank"/"ranking" and "unranking" in computational mathematics.[2][3]

Number of combinations with repetition 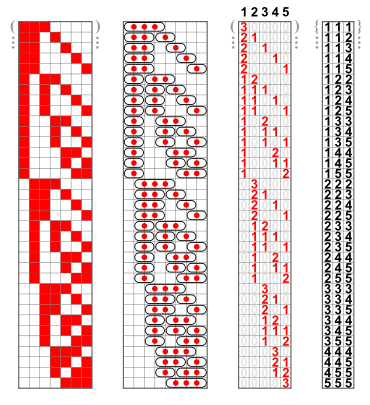 A k-combination with repetitions, or k-multicombination, or multiset of size k from a set S is given by a sequence of k not necessarily distinct elements of S, where order is not taken into account: two sequences of which one can be obtained from the other by permuting the terms define the same multiset. If S has n elements, the number of such k-multicombinations is also given by a binomial coefficient, namely by

(the case where both n and k are zero is special; the correct value 1 (for the empty 0-multicombination) is given by left hand side

, but not by the right hand side

For example, if you have ten types of donuts (n = 10) on a menu to choose from and you want three donuts (k = 3), the number of ways to choose can be calculated as

A concrete example may be helpful. Suppose there are 4 types of fruits (apple, orange, pear, banana) at a grocery store, and you want to buy 12 pieces of fruit. So n = 4 and k = 12. Use label 0 for apples, 1 for oranges, 2 for pears, and 3 for bananas. A selection of 12 fruits can be translated into a selection of 12 distinct numbers in the range 1,...,15 by selecting as many consecutive numbers starting from 1 as there are apples in the selection, then skip a number, continue choosing as many consecutive numbers as there are oranges selected, again skip a number, then again for pears, skip one again, and finally choose the remaining numbers (as many as there are bananas selected). For instance for 2 apples, 7 oranges, 0 pears and 3 bananas, the numbers chosen will be 1, 2, 4, 5, 6, 7, 8, 9, 10, 13, 14, 15. To recover the fruits, the numbers 1, 2 (not preceded by any unchosen numbers) are replaced by apples, the numbers 4, 5, ..., 10 (preceded by one unchosen number: 3) by oranges, and the numbers 13, 14, 15 (preceded by three unchosen numbers: 3, 11, and 12) by bananas; there are no chosen numbers preceded by exactly 2 unchosen numbers, and therefore no pears in the selection. The total number of possible selections is

Number of k-combinations for all k

The number of k-combinations for all k,

, is the sum of the nth row (counting from 0) of the binomial coefficients. These combinations are enumerated by the 1 digits of the set of base 2 numbers counting from 0 to 2n − 1, where each digit position is an item from the set of n.

There are various algorithms to pick out a random combination from a given set or list. Rejection sampling is extremely slow for large sample sizes. One way to select a k-combination efficiently from a population of size n is to iterate across each element of the population, and at each step pick that element with a dynamically changing probability of