It is the birthplace of Qin Mu, and Hai-Hong, the father of Taksin who was a Thai king.

It is located in the southeast part of Guangdong Province. Chenghai was a town founded since 1563 AD, under Teochew jurisdiction, controlled by Shantou City from 1983 to 1994. From 1994 onward, Chenghai was upgraded to a county-level city and was administrated by the Provincial Government directly. When in 2005, Chenghai was absorbed as a district by Shantou City, it had established its reputation as a world-class toy manufacturing hub.[citation needed] 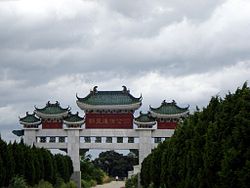