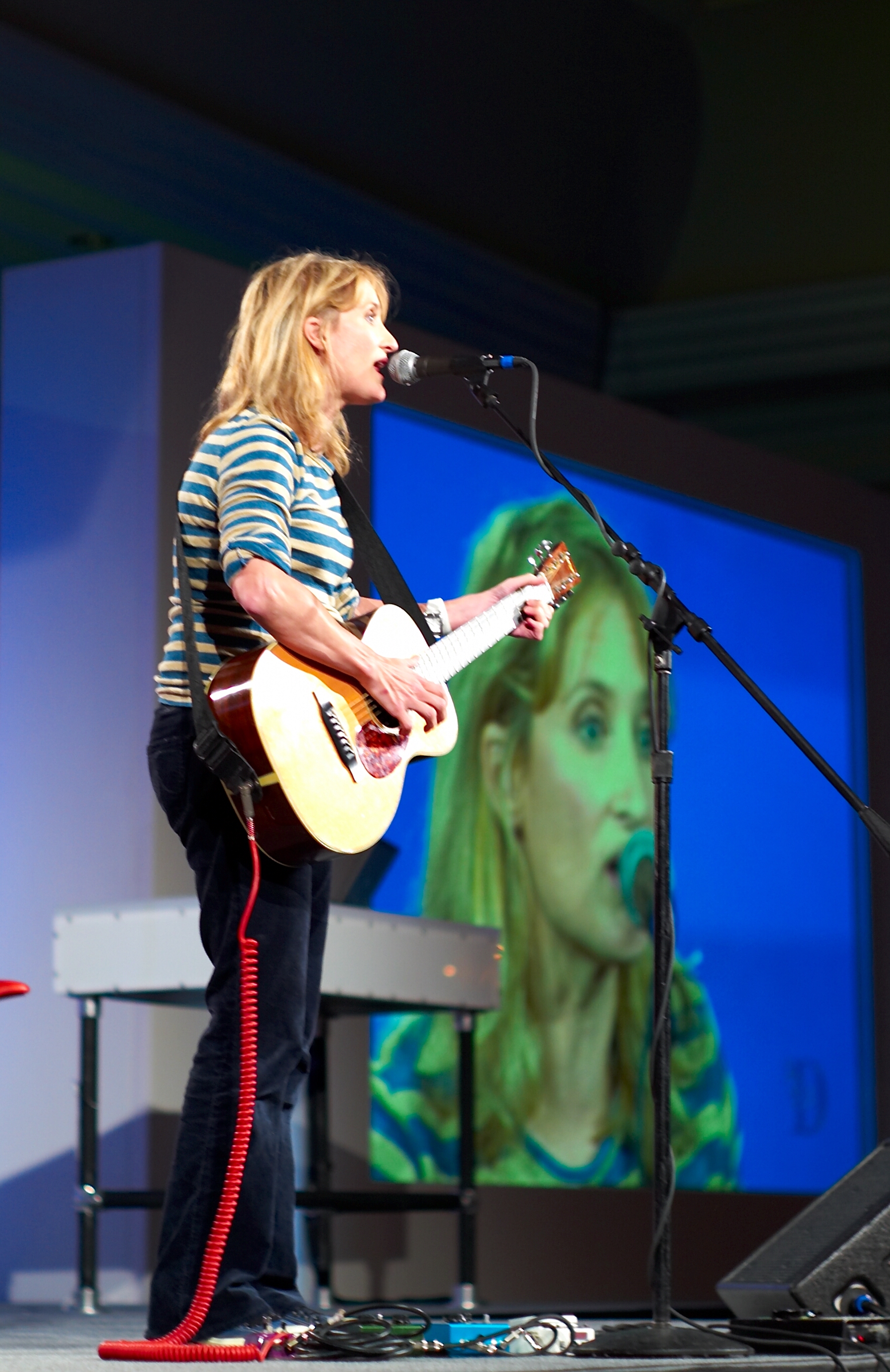 Jill Sobule (born , in ) is an American best known for the 1995 single "I Kissed a Girl", and "Supermodel" from the of the 1995 film "Clueless". Her folk-inflected compositions alternate between ironic, story-driven character studies and emotive ballads, a duality reminiscent of such 1970s American songwriters as , , , and . Autobiographical elements, including Sobule's Jewish heritage and her adolescent battles with and depression, frequently occur in Sobule's writing. An appreciable percentage of her work is also dedicated to detailed accounts of both her own fictional female creations and such troubled but celebrated women as and , whose stories are usually used to make ironic comments about fame and celebrity.

To date Sobule has released seven studio albums of original songs, three EPs, and a compilation album. Sobule's output also includes original songs available only via the Internet, a cover of 's Christmas novelty track "Merry Christmas from the Family," and a version of the late Warren Zevon's "Don't Let Us Get Sick" included on both Sobule's acoustic album and on a posthumous . Though Sobule remains more of an underground artist, playing for fans across the United States in smaller, more personal settings, her albums are frequently critically acclaimed and her music industry supporters include Rundgren, , , and member .

Sobule's debut album "" was released in 1990. Though produced by pop legend , the album failed to sell. During this period a follow-up record was produced by British New Wave rocker Joe Jackson but Sobule was dropped from her label and the second record was never released. It was five years before Sobule landed another recording contract.

Her 1995 album "Jill Sobule" established Sobule as part of a short-lived but fruitful mid-90s movement of female singer-songwriters that included such artists as , and . The album contains Sobule's best-known composition "I Kissed a Girl", a story-song about a lesbian flirtation between two suburban girlfriends which became an unlikely radio success thanks in part to a comedic featuring beefcake male model Fabio. "Supermodel" (sample lyric: "I didn't eat yesterday... and I'm not gonna eat today... and I'm not gonna eat tomorrow... 'Cause I'm gonna be a supermodel") managed to both send up and celebrate American teenage lifestyles, and became well-known after its inclusion in 1995's hit teen comedy film "Clueless".

The "Jill Sobule" album seemed to establish Sobule's commercial prospects, but her third album slowed that momentum while setting what has so far been the musical and production patterns for the rest of her career. 1997's "" featured Sobule's most elaborate pop productions to date and contains songs about an eclectic range of topics including reactionary Christianity ("Soldiers of Christ"), the negative impact of anti-depressant medication on the libido ("Happy Town") and what is either the only track ever recorded that uses Anne Frank's enforced Nazi-era hibernation as the metaphor for a love song or the only song about Anne Frank that couches her life and death in the terms of a tussle over loyalty between two lovers ("Attic"). Though embraced by record reviewers from publications as diverse as "" and "", "" sold poorly, simultaneously solidifying Sobule's critical reputation while stalling her commercial momentum.

The 2000 record "" may be Sobule's most characteristic set. Anchored by the female character studies "Lucy at the Gym" (about an anorexic exercise addict), "Claire" (about an aging lesbian aviator succumbing to ) and "Mary Kay" (about , the notorious real-life schoolteacher who became impregnated and imprisoned because of an affair with a 13-year-old male student), "" also contains some of Sobule's most directly confessional songwriting, especially the atheist's prayer "Somewhere in New Mexico" and the insomniac's lullaby "Rock Me To Sleep". Henley contributed a promotional quotation to the ad campaign for the album and selected Sobule to open for him during his solo tour that year.

In 2004, Sobule self-released an independent album of demo-quality acoustic tracks entitled "". In addition to some of her rarer compositions and several tracks that would later receive fuller arrangements on Sobule's next major-label release, Sobule performed offbeat cover versions of such standards as the old Doris Day theme song "Que Sera Sera" and "Sunrise/Sunset" from the Broadway musical "".

2004's more elaborately recorded "" was one of the last albums distributed by legendary personal manager and media entrepreneur 's now-defunct . The album is a representative selection that alternates between self-portraiture and ironic story songs. Here Sobule comments on her own unconventional show business career (the bittersweet "Freshman") as well as the tragicomic arc of 60s icon ("Joey") alongside whimsical autobiographical songs ("Cinnamon Park" and "Strawberry Gloss") and more politicized tracks dealing with issues related to adolescent homosexuality ("Underdog Victorious" and the humorous "Under the Disco Ball") and even sexual slavery ("Tel Aviv," sung in the voice of a girl forced into prostitution after going overseas for a waitressing job "in the Promised Land"). Sobule's niche as one of the more empathetic satirists working in popular song is encapsulated by her "tribute" to Heatherton, which gets a lot of comedic mileage out of the garish shallowness of Heatherton's story but with a chorus that finds Sobule singing "All she ever wanted was your love and affection/Isn't that the same thing that we all want?" before ending with the words "You can sleep at my house if you want to, Joey."

The liquidation of Artemis Records led Sobule to extend her experiments with online music distribution and to relocate from to , where she has continued to write and perform prolifically and to compose original music for television, including for the popular "" series "".

In mid-January 2008, Sobule launched a website, [http://www.jillsnextrecord.com/ jillsnextrecord.com] , which sought to raise $75,000 through fan donations in order to produce, manufacture, distribute and promote an upcoming studio album. In exchange for their donations, Sobule offered her patrons an assortment of gifts with values commensurate with the amount of the donation. These gifts range from a free download of the album when it's released ($10) to the opportunity to attend a recording session and sing on the record ($10,000). On , , 53 days after the public launch of the site, Sobule reached her target through donations from over 500 people in 44 U.S. States, the District of Columbia, and eleven foreign countries [ [http://www.jillsobule.com/whatsnew.asp?item=080308 Announcement] on Jill Sobule's official website] . As the album nears completion, Sobule continues to involve the fans who financed it, using her blog to solicit their opinions on song mixes, programming and prospective album titles.

Sobule uses both satire and personal experience to sing about a range of issues, including sexuality, depression, war, abandonment, and greed. According to her website bio, a central preoccupation of her work is the classic one: "Love found, love lost, love wished for and love taken away." Many of her songs incorporate humor into their narrative. She often creates detailed character sketches, especially of women.

Generally, her songs are unconventionally folk-like, using lounge music percussion flourishes and retro horn charts not usually found in tracks recorded by mainstream artists. Occasionally her arrangements intentionally mimic works by other performers, most noticeably on "Rainy Day Parade" from 2000's "," which quotes TV's "" theme to lend ironic triumphalism to a song about a woman going back on anti-depressant medication, and "Cinnamon Park" from the 2004 album "", which paraphrases portions of the 1972 single "Saturday in the Park" by the band Chicago. Her rhythmic sensibility at times recalls cocktail music deity Esquivel, and her harmony parts can resemble on some of her more elaborate album tracks -- possibly a partial legacy of her early recording efforts with founder and avowed Beatlemaniac .

Sobule is a prolific collaborator, writing and performing both with other musicians and with artists from nonmusical disciplines, including blogger , television producer Sue Rose and comedienne .

In the late 90s, Sobule toured with as "The Richard & Jill Show." Together they wrote "Bitter" from "Happy Town", "Rock Me To Sleep" from "Pink Pearl", "Big Shoes" from "I Never Learned To Swim", and "Waiting For The Train" from Barone's "Clouds Over Eden" album. They also appeared together in the underground film "Next Year In Jerusalem", which features another of their compositions, "Everybody's Queer." The pair continue to collaborate, including on a new song, "Odd Girl Out" for Barone's forthcoming album.Their songs have been used on "". "", "", "" and other television shows.

In 2004, she played one of the five leads in the film "Mind The Gap" with six of her songs featured on the soundtrack.

In 2005, Sobule contributed music to "", a popular "Nickelodeon" TV series about a 13-year-old aspiring songwriter, including a title song performed by Sobule under the program's opening credits. Four Sobule compositions or co-compositions appear on the series star's debut album, "": a Roberts cover version of "Mexican Wrestler" from Sobule's album "Pink Pearl;" "Punch Rocker" and "94 Weeks (Metal Mouth Freak)," both written by Sobule for Roberts' character to "compose" on the program; and "New Shoes," a track co-written by Sobule with "Unfabulous" series creator Sue Rose.

In 2006, Sobule met , the actress, writer and comedienne, and started performing the "Jill and Julia Show", a compilation of songs and stories. They performed at the meeting in Las Vegas on January 19, 2007, as well as at regular showings for the Groundlings Theater in Los Angeles.

Also in 2006, Sobule created a theme song for blogger Ariana Huffington's self-help book "On Becoming Fearless". The tune was briefly featured on Huffington's popular aggregated weblog "" in a music video featuring vocals by both Sobule and Huffington.

In 2007, Sobule teamed up with John Doe to produce and record a cover of 's "Down By The River" for the benefit CD "Cinnamon Girl - Women Artists Cover Neil Young For Charity". Other contributing artists included Lori McKenna, Tanya Donelly, Josie Cotton, Kristin Hersh, Britta Phillips, and The Watsons Twins.

In May 2008, Sobule released a CD of music from "Prozak and the Platypus", a multi-media collaboration of Sobule, playwright Elise Thoron, and graphic artist [http://www.koolass.com/ KellyAnne Hanrahan] . The play, written by Thoron (book, lyrics) and Sobule (music) and illustrated in a graphic novella by Hanrahan, tells the story of a fierce young woman, Sara (a musician) and her father Arvin, a neuroscientist, who relocates his family from Los Angeles to Brisbane, Australia to study REM sleep in the , a unique species native to Australia. Shattered by her mother's recent suicide and unhappy with the side-effects of her own treatment for depression, Sara renames herself "Prozak," rages through her songwriting, and rebels. Meanwhile, in her father's lab, Sara finds an unexpected confidant in her father's current lab subject, a jaunty platypus who speaks to her and calls himself "Frankie." In the piece, according to its [http://www.prozakandtheplatypus.com/ website] , "Music club and science lab become testing grounds in which angry teen and scientist father pit aboriginal mythology against modern neuroscience research. The dreams of a platypus prove to be the link between the two."

Sobule has been a frequent guest on 's . Her contributions have largely been musical essays offering commentary on contemporary issues, including record-financing in the music industry, the 2007 Writers Guild strike, and the popularity of tarty, uncreative Halloween costumes.

Sobule toured twice with the late , whose penchant for sardonic storytelling she shares. The two artists frequently accompanied one another during each other's sets, and Zevon was known on multiple occasions to take the lead vocal on Sobule's "I Kissed a Girl". Sobule has said that part of their bond came from the fact that she, like Zevon, was best known for a single fluke hit (Zevon's being "").

In recent public appearances, Sobule has expressed interest in compiling a live album, in addition to releasing her new studio disc. On a blog from her myspace account, Sobule stated she is recording two new albums, one with underground string quartet Ethel.