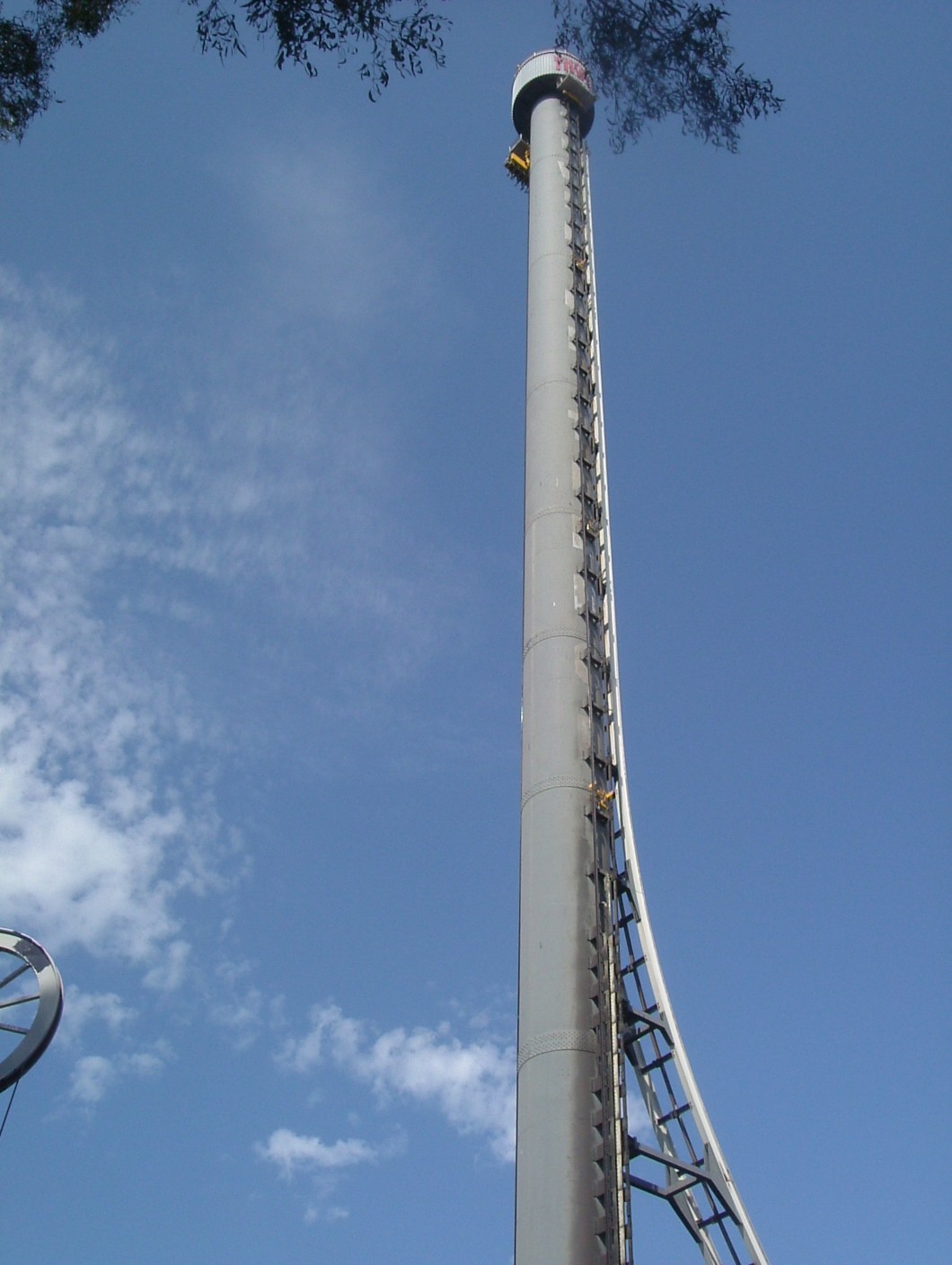 Tower Of Terror is a steel at in the . It is currently the fourth fastest roller coaster in the world, but has been reported to be the fastest and tallest roller coaster in the Southern Hemisphere [http://www.ultimaterollercoaster.com/thrillrides/towerterror/] . Tower of Terror is one of two reverse freefall coasters designed by (the other being at in ). Opening , , it held the world's fastest roller coaster record for two months before Superman: The Escape opened. Officially both rides share the same top speeds [http://www.roller-coaster.com.au/release.php?prid=18] .

The six ton passenger vehicle, called the 'Escape Pod', is electro-magnetically powered and rapidly accelerates its passengers to 160.9 km/h (100 mph) in seven seconds. The track then pitches up 90 degrees to the vertical, with the passengers pulling 4.5 G's. The car climbs almost 38 stories high.

Riders are weightless during the entire vertical section of the ride for about 6.5 sec, 3.25 seconds going up and 3.25 secondsfalling back down. The car then pitches back down to horizontal and hurtles back into the station where it comes to a rapid stop.

There has been some controversy over whether Tower of Terror is a roller coaster, since the car goes up a tower only to fall back down again. Because of this, the ride is not found on many lists of the tallest and fastest roller coasters.

The steel passenger vehicle carries 15 passengers in four rows and weighs around six tonnes. The car is equipped with four large steel road wheels that run on the track, measuring 600 millimeters in diameter at the front and 900 millimeters at the rear. Smaller jockey wheels run on the other side of the track such that the track sits between the pairs of wheels.

In the station, a kicker tyre system is used to propel the car into the launch, and also to stop the returning car. Once in the launch, a linear synchronous motor (LSM) system is used to accelerate the car along the horizontal part of the track, and also to slow the returning car. The two systems are used because LSM launch systems cannot actually start motion, only increase or decrease it.

The Tower of Terror's restraint system consists of a thick, rigid lap bar with the hand grips also mounted to the lap bar. This type of restraint feels like a lap bar restraint, while still providing the safety of a traditional over-the-shoulder restraint. The lap bar is not like a normal lap bar, each rider has their own individual lap bar that comes forward from the floor to the riders lap with two handle bars on each side.

These restraints use a hydraulic locking system (rather than a ratchet) which allows them to be pulled down to any position; when "locked", they can move down to any position but not up. In contrast, a ratchet-based restraint only locks at each "notch", and will often be too loose or uncomfortably tight. In order to speed up loading, riders are asked to secure their own restraints if they are able to. The minimum height restriction is 120cm (47inches), the same as most other major coasters. In addition, it is actually possible for a rider to be too tall to ride The Tower of Terror - if you are tall enough that your head is entirely above the seat, you would not be able to ride as the launch could cause severe whiplash.

The queue line begins with a footpath that extends from the underpass linking Tiger Island and Wiggles World, to the inside of a large skull. From there, the line bends into a tunnel where riders have to walk 270 degrees anti-clockwise, crossing a metal bridge below which a model city is displayed. This is followed by some stairs at the top of which is a Dreamworld staff member in charge of letting people pass. Fifteen people at a time are allowed to pass through to the second waiting area where they wait for instructions to proceed. In the third waiting area, riders are asked to form four queues with three people in the front queue and four people in each of the remaining three queues. The doors to the escape pod then open up, allowing riders to embark. Following the ride, riders are let out an exit on the opposite side to the entry, which leads into a passageway containing a metal lift. This takes the riders back down to ground level and opens up to the Tower of Terror gift shop. The gift shop contains souvenirs and photos of the riders in the escape pod for purchase.

The Tower of Terror features an on-ride camera, which is placed in the take-off station. The camera is timed to go off 0.25 seconds after the initial launch, resulting in humorous photographs. Since the camera is located on the left side of the track, riders intending to purchase their on-ride photo are advised to sit in the left-hand seat.

* The full life of the magnets used to power the Tower of Terror is estimated to be 1.2 million years.
* The magnets are so strong they would need to be winched apart should two opposite poles ever come together.
* The tower supports both the Tower of Terror and the two Giant Drop carts.
* To drive the motors, 2.2 MW, enough to supply a small town, is supplied for six to seven seconds. This momentarily doubles Dreamworld's power usage.
* More than 600 tonnes of steel were used to construct the Tower of Terror, with around 450 tonnes for the 115 metre tower alone. [http://www.ride-extravaganza.com/rides/tower_of_terror/]
* "Tower of Terror" is spelled out on the ride's 115 metre tower using 4.5 tonnes of steel. Each letter measures between 1.5 and 2.5 metres wide and high.
* One hundred and seventy-five concrete trucks were needed to deliver the 3,500 tonnes of concrete used to build Tower of Terror.
* Around 1,200 tonnes of concrete are dedicated to the ride's 37 huge pylons.
* The 600 millimetre diameter pylons stretch across the ride's 330 metre length, with one placed every nine metres.
* Over 16,000 bolts hold the structure together.
* It took around 3,500 litres of paint to coat the ride's exterior.
* Five kilometres of electrical cable are used to ensure the ride's power source.
* Around 600 cubic metres, or thirty truck loads, of soil were removed to make way for the ride's foundations.
* Up to 200 sub-contractors from around 15 local firms were engaged to work on the building project.