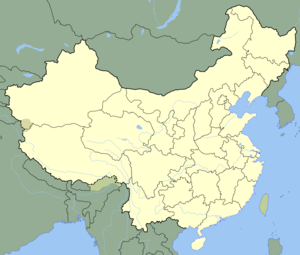 The area has a long history of religious worship dating back to the Tang dynasty of China. The site was enhanced during both and dynasties. The revolutions of the twentieth century saw the site abandoned and some buildings damaged. The park has since be restored and expanded with new Pagoda and temples for the Maitreya Buddha.

At it's highest point, Qianshan reaches an elevation of 708.3 metres. The park is densely wooded with 95% of the area covered by forests. Over ten thousand of the pine trees have been estimated to be older than 100 years in age. Rare flora and fauna are found here along with a large number of plants used in traditional Chinese medicines. Over a hundred different species of birds can be observed in the park including the rare .

Motor cars are not allowed within the park. Tourists must either walk or hire one of the electric carts. Many paved foot paths climb steeply up the hillsides through thick forest. These foot paths lead past, Steele, honouring the dead, small shrines, pagodas and temples. Three cable car routes connect to several of the parks scenic peaks. However, none of the cable cars go the whole way up, leaving visitors some climbing if they wish to attain the summit.

Among Qianshan's scenic spots is a new discovery - a mountain in which has be shaped by nature in such a way that it resembles the Maitreya Buddha. The Buddha stands 70 metres high and 46 metres wide and is claimed to be the largest naturally occurring image of Maitreya Buddha in the world. Several temples have been built on the peaks overlooking the Maitreya Buddha. These include: The Pagoda of Maitreya, Great Buddha Temple, Pavilion of Buddha, Greeting Gate, Holographic Buddhist Character and Tachibana Hoxdox. The park has become the venue for the Qianshan Great Buddha Festival in June every year.