The first organozinc compound ever prepared, diethylzinc (by Edward Frankland in 1849), was also the first compound discovered with a metal-to-carbon sigma bond. Many organozinc compounds are pyrophoric and therefore difficult to handle. Organozinc compounds in general are sensitive to oxidation, dissolve in a wide variety of solvents where protic solvents cause decomposition. In many reactions they are prepared in situ, not isolated and reacted further. All reactions require a protective gas (nitrogen or argon) blanket.

The most common oxidation state is +2. The three main classes of organozincs are: organozinc halides R-Zn-X with X a halogen atom, diorganozincs R-Zn-R with R an alkyl or aryl group and lithium zincates or magnesium zincates M+R3Zn- with M lithium or magnesium.

The carbon zinc bond is polarized towards carbon due to the differences in electronegativity (carbon:2.55 and zinc: 1.65). Diorganozincs are always monomeric, the organozinc halides form aggregates through halogen bridges very much like Grignard reagents and also like Grignards they display a Schlenk equilibrium.

Several general methods exist for the generation of organozinc compounds. 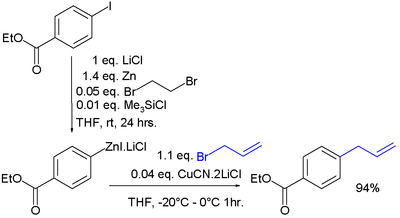 In this method zinc is activated by the action of 1,2-dibromoethane and trimethylsilyl chloride. A key ingredient is lithium chloride which quickly forms a soluble adduct with the organozinc compound thus removing it from the metal surface.

In many of their reactions organozincs appear as intermediates. 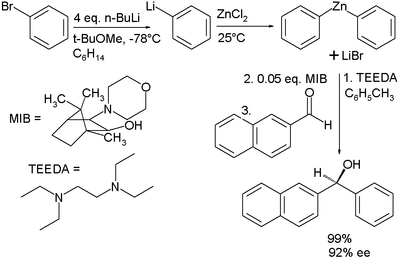 The first ever organozinc ate complex (organozincate) was discovered in 1858 by James Alfred Wanklyn,[11] an assistant to Frankland and concerned the reaction of elemental sodium with diethylzinc:

In 2007 it was reported that by tweaking the reaction conditions the zincate proceeds to react to sodium hydridoethylzincate(II) (with hydrogen atoms as bridging ligands) as a result of beta-hydride elimination of one of the ethyl groups:[12]

Low valent organozinc compounds having a Zn-Zn bond are also known. The first such compound Decamethyldizincocene was reported in 2004 [13]