Infobox Radio Show
show_name = The Lord of the Rings 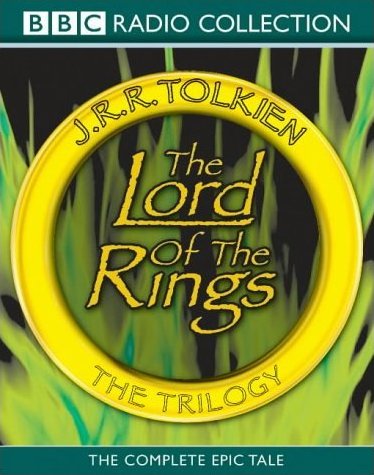 In 1981 the UK radio station broadcast a dramatisation of 's "" in 26 half-hour stereo installments. This followed a previous 12-part BBC Radio adaptation in 1955 and 1956, of which no recordings are known to have survived, and a 1979 recording by in the USA.

Like the on which it is based, "The Lord of the Rings" is the story of an epic struggle against the Dark Lord of , the primary villain of the work, who created a Ruling Ring to control the nineteen , and an alliance of heroes who join forces to save the world from falling under his shadow.

Each of the original 26 episodes received two broadcasts per week, individual evening broadcasts of the 30 minute episodes with an hour long "omnibus" repeat on Sunday mornings – standard practice for many BBC radio serials even today. The first broadcast of Episode 2 was blacked out across a large part of south east England because of a transmitter failure (a very rare occurrence even then).

The series was also broadcast in the US on NPR with a new synopsis preceding each episode, narrated by . It was also aired in .

A soundtrack album featuring a completely re-recorded and in some cases expanded, suite of Stephen Oliver's music was released in 1981.

The 26-part series was subsequently edited into 13 hour-long episodes, restoring some dialogue originally cut for timing (since each hour-long episode is actually around 57 minutes, as opposed to 54 minutes for two half-hour episodes with overlaps and extra credits removed), rearranging some scenes for dramatic impact and adding linking narration and music cues. Even so, a small amount of material was also lost, notably a minute long scene featuring Gandalf and Pippin on Shadowfax discussing the beacon fires of Gondor. This material was not restored to the 2002 re-edited version.

The re-edited version was released on both cassette tape and sets which also included the soundtrack (noticeably taken from a vinyl copy). Incidentally, episode 8 of the series, "The Voice of Saruman" was labelled as "The Voice of Sauron" on the cassette & CD box-sets.

The script by and attempts to be as faithful as possible to the original novel, but there are some errors and alterations. They include:

*At one point, Minas Anor and are referred to as though they were separate cities; Minas Anor is the original name for Minas Tirith. This was when Gandalf and Pippin were discussing the "" whilst en route to Minas Tirith.
*The radio serial omits the sequence in the book in which the hobbits visit . This sequence was also excised from the film version, because Jackson claimed it contributed nothing to the long-range narrative of the story. However, the scene "was" dramatised, in a similar style but with different actors, in a later series of Tolkien radio adaptations by Sibley entitled "The Adventures of Tom Bombadil" (a title otherwise only loosely connected with the book of the same name).
*In actual fact the reason Tom was omitted is because Tolkien only inserted Tom to 'get revenge' on the publishers as they had, some years earlier, refused to accept his story of Tom in a short novel of the same name as they considered it badly written. Tolkien was furious with this and include Tom to exact revenge, in an interview on the BBC some years after the trilogy was completed he admitted to this, the BBC, in it's wisdom decided (rightly in my opinion) that Tom had 'no place' in the story and he was therefor omitted.
*The sub-plot which (in the book "The Fellowship of the Ring") explained how Merry, Pippin and Sam knew about the Ring and the journey to Mordor was somewhat edited for the radio dramatisation, in which Gandalf arrives at the Shire one evening, and explains to Frodo the following morning about the Ring. This is overheard by Sam, who is gardening outside the window. Gandalf catches him at it, and so he and Frodo threaten punishment if he breathes a word to anyone, and that he should travel with Frodo to Mordor. Later in the story, when Merry and Pippin are explaining to Frodo how come they know so much, they reveal that Sam was the source of the information, but the information "dried up" after Gandalf caught him. In the book, it is explained that there was a lot of investigation going on prior to Gandalf's return to the Shire. This was not explained in the radio production, so the impression is given that prior to Gandalf's return, Frodo, Sam, Merry and Pippin knew nothing of the significance of the Ring. Gandalf's explanation was heard by Frodo and Sam, but not by Merry and Pippin. Yet Merry and Pippin knew about it all, despite the fact that they stated that Sam had stopped giving them information after Gandalf caught him eavesdropping.
* Gandalf refers to the Balrog of Moria as a servant of Sauron.
* The story includes an arc where Wormtongue is waylaid by the : this only appears in "", not the novel.

Links to other "The Lord of the Rings" productions

(/Sméagol) and () played roles they had already played in 's animated version.

In 2002, following the success of Jackson's movies, the BBC reissued the series in three sets corresponding to the three original volumes ("", "" and "").

This version omitted the original episode divisions, and included a new opening and closing narration for the first two sets, and an opening narration only for the last, written by Sibley and performed by Ian Holm as Frodo.

The re-edited version also included some additional music cues, which had to be taken from the soundtrack album because the original master tapes for the series music had been lost.

The soundtrack, now digitally remastered, was also included with "The Return of the King" set, with a demo of John Le Mesurier singing "" included as a bonus track.

The series has not been heard on the digital BBC archive station , despite frequent requests, reportedly because of issues.

*One of the singers, , later became far better known as a wine expert.