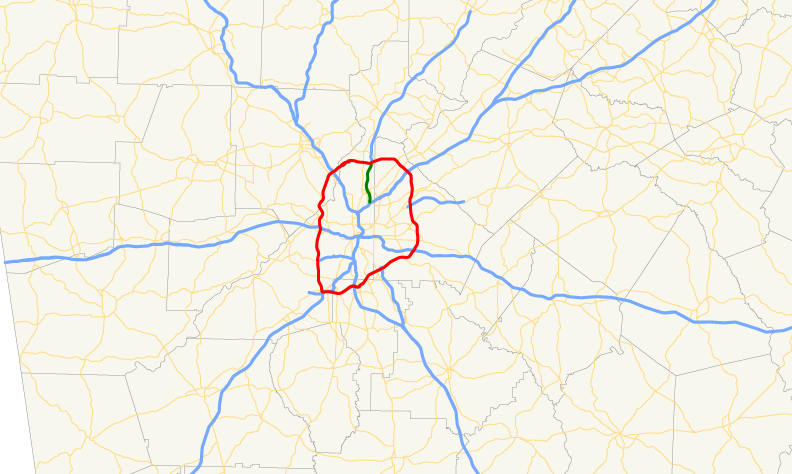 Interstate 285 (I-285) is a encircling , for 63.98 s (102.97 km). I-285 is also known as unsigned State Route 407 and is colloquially referred to as the Perimeter. It is very heavily traveled, and portions of the highway frequently slow to a crawl during . It is also signed as Atlanta Bypass, although suburban sprawl has made it one of the most heavily traveled roadways in the country.

I-285 intersects with in the northeast (Tom Moreland Interchange/"Spaghetti Junction") and southwest, in the northwest ("") and south, (Tom Murphy Freeway/ Freeway/ Highway) in the east and west, and Georgia 400 (Turner McDonald Parkway/T. Harvey Mathis Parkway) in the north. It also meets one end each of Interstate 675, ("Lakewood Freeway"), and the . For 1.21 miles (1.95 km) in the southwest corner, I-85 occupies the median of I-285, yet the roadways remain separate. s are numbered , starting at the southwestern-most point at I-85, and ending just east of there where it meets I-85 again.

Between I-85 and I-20 in southwest Fulton County, I-285 is designated as the "Bob A. Holmes Freeway". It is also designated as "James E. 'Billy' McKinney Highway" between I-20 in northwest Atlanta and I-75 near .

The highway was officially opened in . At that time, I-285 had only four lanes (two each way). Today, it is eight to 12 lanes wide, with the northern part from I-75 to Georgia 400 to I-85 being by far the most heavily traveled. One segment of the highway near the junction with widens to 18 lanes, including collector-distributor lanes.

To many residents of Atlanta, the Perimeter defines a useful boundary to separate metro Atlanta's core from its surrounding s. Many people will distinguish a location as being inside or outside the Perimeter, sometimes abbreviated as ITP and OTP, a recent local . This was also the rough boundary chosen by for separating in suburban from the existing in .

About half of the total mileage of I-285 is covered by , Georgia's (ITS). Sixty-two s, nine electronic message signs and full -detection s are installed between I-75 in the northwest and I-20 in the east. Additional ITS coverage is currently under construction on the west and southeast sides of the loop, with completion expected in spring 2007.

Because the Perimeter was built so near the city, a second () was proposed, to exist outside even most of the exurbs. Due to local opposition, most of the idea has been shelved indefinitely; however the section continues to come up, particularly under former , .

A portion of the section between I-75 and I-85 on the south side of I-285 has been d with a new and for . s were developed prior to construction to simulate a touching down on the runway from a driver's perspective. The entire highway within the s is outfitted with stopped- sensors and s. Two electronic signs on either side of the tunnels can warn drivers if the tunnel is closed in an .

*Heavy traveling through (but not into) Atlanta are required to bypass the city on I-285, as there is a well-signed and heavily enforced ban on through truck traffic along I-75, I-85, I-20, Georgia 400, and many other major Atlanta thoroughfares. As with highways just outside I-285, trucks are also prohibited from the far-left lane or two.

*The northern portion of I-285, east of the "" (I-75 junction) to "Spaghetti Junction" (I-85 junction), is frequently referred to as the Top End perimeter in traffic reports, especially by Captain (ABC affiliate and WSB AM) and Jason Durden on .

*The stretch of I-285 between I-75 and I-85 on the north end is one of the busiest freeways in the United States, handling about 250,000 cars per day and crossing through three counties. Through that stretch, the freeway balloons from three or four lanes to anywhere between five and seven lanes. A project called revive285 is studying ways to improve this corridor.
*Rapper pays tribute to I-285 in his song
*Former pitcher Pascual Pérez missed a 1982 game where he was supposed to be the starting pitcher, by circling I-285 twice. Thereafter, his nickname was "I-285." The Braves won the game.

*I-285 cost $90 million to complete in 1969. The reconstruction, particularly on the top-end and the Spaghetti Junction reconfiguration, has cost about $355 million.

*Much of Atlanta's high-end commercial has popped up along I-285, particularly at the northwestern I-75 junction and the Georgia 400 junction. Notable buildings include the 35-story King and Queen towers in the and the complex in the area.

*Signage outside of I-285 along I-75 and I-85 refers to I-285 as the "Atlanta Bypass". However, locals know that it is actually one of Atlanta's main streets. Since the 1970s, the Georgia Department of Transportation has planned an outer loop, which would be a roughly 230 mile (370 km) circumferential loop around metropolitan Atlanta. Under current Governor , the plans were dropped from the Regional Transportation Plan, in favor of the expansion of the rural state road network outside of Atlanta. As a sidenote, the state still retains ownership of most of the land that would be needed to complete at least the northern section of the Outer Loop, known as the . , ideas have been floated to build that highway even further north, through areas which are still rural.

The following exits are listed clockwise: south to north, west to east, north to south and east to west. In , Georgia replaced the actual sequential exit numbers with numbers.

The original Exit 24 went to Tilly Mill Road and Flowers Road. When I-285 was reconfigured in the 1990s, the exit was removed.