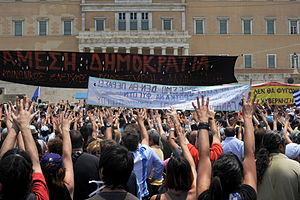 A "moutza" (μούτζα), or mountza, (μούντζα) or "faskeloma", "φασκέλωμα" is the most traditional gesture of insult among Greeks which consists of extending all fingers of one or both hands and presenting the palm or palms towards the to-be-insulted person in a forward motion. It is often coupled with the expletives "να" (na), "παρ'τα" (par'ta) or "όρσε" (órse), meaning "here", "take these" and "there you go", respectively. The closer the gesture is to the other person's face, the more threatening it's considered.

An even more offensive version is achieved by using both hands to double the gesture, smacking the palm of one hand against the back of the other, in the direction of the intended recipient.[1]

If a Greek wants to hand-signal the number 5 to someone, they take care not to overextend the fingers, or to face their palm towards themselves and the back of the hand towards the intended recipient of the signal, lest it be misunderstood for a "moutza".

A closed (or polite) moutza consists of keeping the tips of all five fingers together and pointing towards the targeted person. This gesture is usually accompanied by the preposition 'na!' (there!). Sometimes this gesture is completed with only three fingers being half opened (thumb, index and middle). Or the targeted person can be called upon to blow on the fingers in order to make them open into a full moutza. In this case it is accompanied by the imperative 'fisa!' (blow!).

The origin of the gesture can be traced back to the ancient years, when it was used as a curse. It is said that even during the Eleusinian Mysteries, it complemented verbal curses against evil forces. It was then called faskeloma "φασκέλωμα" (the words faskeloma and faskelo, meaning moutza, are still used to this day). In later years, the name changed to "moutza" when in the penal code of Byzantium, whereby a chained criminal was paraded around town sitting, facing backwards, on a donkey and with their face smeared with cinder to enhance their ridicule. Cinder in medieval Greek was called moutzos (μούντζος). Because cinder was wiped on the person's face first by collecting it in the palm and then by extending open the fingers, the gesture itself became insulting, to be known as moutza, after the name of the material applied. The modern Greek word "moutzoura" or "mountzoura" (a smudge, scribble or dark stain) has the same origin.

The gesture of moutza does not have the same significance in other cultures around the world. In a few countries there are similar gestures. Their significances are: