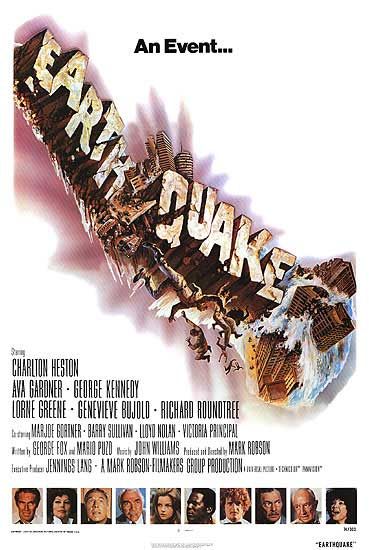 In the wake of the tremendous success of the disaster-suspense film "Airport" (1970), began working with executive producer Jennings Lang to come up with a new idea that would work within the same "disaster-suspense" genre. The genesis of the idea literally "came to them" as a direct result of the which shook the area during the early morning hours of February 9, 1971. Director and Lang were intrigued by the idea of creating a disaster on film that would not be confined to an airliner, but rather take place over a large area. [cite web |title="Earthquake" Movie Script Development |work=aol.com |url=http://members.aol.com/earthquakemovie/scripting.html |accessdate=2007-11-17]

Lang scored a major coup when he was able to sign on legendary screenwriter to pen the first draft during the summer of 1972. Puzo, fresh from the success of his novel and film, "," delivered the script in August. Much like his "Godfather" films, the characters and situations in his "Earthquake" script were intricate, and showed a similar attention to detail. However, Puzo's detailed script necessitated a much larger production budget (as the action and characters were spread over a vast geographical area in the city of Los Angeles), and Universal was faced with either cutting the script down, or increasing the film's projected budget. Puzo's involvement with "Earthquake" was short-lived, however, as was anxious to begin development with the followup to "The Godfather," "." Since Puzo's services were contractually obligated to the sequel, he felt he would be unable to continue work on two projects of such a large scale, so he opted out of continuing any further work on "Earthquake."

The "Earthquake" script languished at Universal Studios for a short period of time, but was brought back to life by the huge success of the hit, "The Poseidon Adventure," released in December, 1972. Fueled by the enormous box office receipts of that film, Universal Studios put pre-production on "Earthquake" back in to high gear, hiring writer George Fox to continue work with Puzo's first draft. Director Mark Robson worked with Fox (who was more of a magazine writer - this was his first screenplay) to narrow the scope of the script down to fit into the budgetary constraints. After 11 drafts, "Earthquake" went before the cameras in February, 1974. [cite web |title="Earthquake" Movie Script Development |work=aol.com |url=http://members.aol.com/earthquakemovie/scripting.html |accessdate=2007-11-17] [cite web |title="Earthquake" Pre-Production and Production |work=aol.com |url=http://members.aol.com/earthquakemovie2/prepro.html |accessdate=2007-11-17]

Budgeted at $7,000,000 USD, "Earthquake" immediately found itself in a race against the clock with the bigger-budgeted disaster film, "The Towering Inferno," which was being financed by two movie studios (20th Century Fox and , a motion picture first) and produced by ("The Poseidon Adventure"). While that film featured a larger "all star" cast (in fact, Universal had approached several, including Steve McQueen and , to star in "Earthquake" - but they had already been signed by Allen), Universal was able to land in the lead role, along with (who signed at the proverbial "11th hour" simply because she wanted to spend the summer in ), George Kennedy, , (who agreed to a part in the film to head off an impending lawsuit by Universal over a prior project), (riding a wave of success from the "Shaft" film series), former evangelical , and fresh-faced newcomer . [cite web |title=Internet Movie Database, Box office/business for "Earthquake" |work=imdb.com |url=http://www.imdb.com/title/tt0071455/business |accessdate=2007-11-17] [cite web |title="Earthquake" The Cast |work=aol.com |url=http://members.aol.com/earthquakemovie/thestars.html |accessdate=2007-11-17]

Production necessitated the complete destruction of the in order to simulate the catastrophic earthquake of the title (as doing the same on Los Angeles streets would not have been possible). Along with a clever use of miniatures of actual buildings, s, and full-scale sets, "Earthquake" combined decades old techniques with those developed especially for the film (including a revolutionary "Shaker Mount" camera system, which mimicked the effects of an earthquake).

Extensive use of highly trained stunt artists for the most dangerous scenes involving high falls, dodging falling debris, and flood sequences, set a record for the most stunt artists involved in any film production up until that time: 141. Major stunt sequences in the film required careful between the stunt artists and behind the scenes stunt technicians who were responsible for triggering full scale effects, such as falling debris. Timing was critical, since some rigged effects involved dropping six chunks of reinforced concrete in order to flatten cars, with stunt performers only a few feet away. In other scenarios, some stunt artists were required to fall sixty feet onto large air bags - for which they were paid the sum of $500.00. [cite web |title="Earthquake" Benind the Scenes |work=aol.com |url=http://members.aol.com/earthquakemovie/behindscenes.html |accessdate=2007-11-17]

Universal Studios and Jennings Lang wanted "Earthquake" to be an "Event Film" - something that would draw audiences in to the theatre multiple times. After several ideas were tossed about (which included bouncing faux "debris" over audience members heads), Universal's sound department came up with a process called "" - a series of large speakers and a 1,500 amplifier, that would pump in sub-audible "infra bass" sound waves at 120 s (equivalent to a jet airplane at takeoff), giving the viewer the sensation of an earthquake. The process was tested in several theatres around the United States prior to the film's release, yielding various results. A famous example is in , where the "Sensurround" cracked the plaster in the ceiling. Ironically, the same theatre premiered "Earthquake" three months later -- with a newly-installed net over the audience to catch any falling debris -- to tremendous success. [cite web |title=Internet Movie Database, Trivia for "Earthquake" |work=imdb.com |url=http://www.imdb.com/title/tt0071455/trivia |accessdate=2007-11-17]

The "Sensurround" process proved to be a large audience draw, but not without generating a fair share of controversy. There were documented cases of s generated by the sound waves. When the film premiered in , the head of the building and safety department demanded the system be turned down, as he was afraid it would cause structural damage. In , a knick-knack shop next door to a theatre using the system lost part of its inventory when items from several shelves were thrown to the floor when the system was cued during the quake scenes. Perhaps the most amazing Sensurround incident occurred when a patron's ribs were cracked by the intense output of the system. [cite web |title=About Sensurround |work=in70mm.com |url=http://www.in70mm.com/newsletter/2004/69/sensurround/about.htm |accessdate=2007-11-17]

After October test screenings in various theatres throughout the country, Universal opted to cut 30 minutes from the film at the last minute (notably from the pre-quake sequences), at the cost of some of the dramatic flow (including a involving an abortion). [cite web |title=Internet Movie Database, Trivia for "Earthquake" |work=imdb.com |url=http://www.imdb.com/title/tt0071455/trivia |accessdate=2007-11-17] Released in the United States on November 15, 1974, "Earthquake" would become the fourth-highest grossing film of the year; its competition, "The Towering Inferno," was the highest. [cite web |title=Internet Movie Database, Release dates for "Earthquake" |work=imdb.com |url=http://www.imdb.com/title/tt0071455/releaseinfo |accessdate=2007-11-17]

For the film's October, 1976 television premiere on , additional footage was added to expand the running time of the film so it could be shown over two nights. Contrary to popular belief, this "television version" made no use of material originally left out of the theatrical release (save one brief scene featuring Victoria Principal and ), but rather new footage was shot some two years after the original, using some of the stars from the theatrical version. New scenes included a young married couple ( and Sam Chew) on an airliner attempting to land at during the earthquake. [cite web |title="Earthquake" The Television Version |work=aol.com |url=http://members.aol.com/earthquakemovie2/tv_version.html |accessdate=2007-11-17]

A script for a sequel, "Earthquake II", was written in 1975 and was to feature the characters played by George Kennedy, , and . The script never reached the production stage. The story details the characters, now refugees from the quake of the original film, adjusting to life in . Another catastrophic earthquake and tsunami eventually strikes the Bay Area. Production was cancelled in late 1977 as the popularity of s was starting to wane. [cite web |title="Earthquake" The Sequel |work=aol.com |url=http://members.aol.com/earthquakemovie/eq_ii.html |accessdate=2007-11-17] [cite web |title=Internet Movie Database, Trivia for "Earthquake" |work=imdb.com |url=http://www.imdb.com/title/tt0071455/trivia |accessdate=2007-11-17]

name=Earthquake: The Big One
picture=
caption=Former Entrance to the Earthquake ride in Universal Orlando Resort
park=Universal Studios Florida and Universal Studios Hollywood (as part of the Studio Tour)
land=San Francisco (Florida) Upper Lot (Hollywood)
theme=Earthquake
opened=June 7, 1990 (Florida) 1988 (Hollywood)
closed=September 8, 2007 (pre-show)November 4, 2007 (entire attraction)
host="Pre-Show: and A Tour Guide" (Florida) "Studio Tour Guide" (Hollywood)
duration=20 (Florida) 5 (Hollywood)
custom_label_1=Preceded By
custom_value_1=The Tower of London Set (Hollywood)
custom_label_2=Replaced By
custom_value_2=Disaster: A Major Motion Picture Ride- Starring You (Florida)"Earthquake" inspired the attraction "Earthquake-The Big One" at Universal Studios Florida and Hollywood. The original attraction starts out by having guests entered a model of a museum in San Francisco themed to earthquakes. A tour guide then appears, and begins to talk about the film, followed by them taking 5 volunteers, which will participate in an interactive portion of the attraction. The guests then entered a screening room with a miniature model of the sets used in the film, in front of them. A screen then rolls down the sets, and appears on it and begins to discuss how the filmmakers filmed the disaster portions of the film with miniature sets, which they set on fire, and, knocked down. Guests are then ushered into another room where the audience participants acted out as if they were in the film, including one volunteer, usually an older woman, was faked that she was dropped from a the tower, in the film. After this, guests boarded a ride vehicle, which took them to a subway station in Los Angeles, where they experienced the earthquake, followed by the ride ending. The pre-show was changed to a "magic of making movies" theme in fall 2002, with slight modifications. The pre-show ended in September 2007, with the former rooms being used as a queue line to the ride vehicles. The ride officially closed on , . The attraction has been replaced by "." Universal Orlando has stated the attraction will be interactive and connected to all of Universal's Disaster films. [cite web |title="Orlando Sentinel" article |work=orlandosentinel.com |url=http://blogs.orlandosentinel.com/business_tourism_aviation/2007/11/bye-bye-earthqu.html |accessdate=2007-11-17] There is also an "Earthquake" section of the Studio Tour, which replaced "The Tower of London Set", and features the tour tram entering a subway station, just before an earthquake hits.

Many scenes from the movie, especially those featuring the destruction of Los Angeles, have appeared in other productions, often those of Universal Studios itself. Some examples include:
* "Quantum Leap": leaped in as one of the stuntmen on the fictional disaster film "Disco Inferno." In the episode, "Sam" is the man hanging from a piece of debris whom Sam Royce ('s character) attempts to save, but loses his grip and falls.
* "": In the episode "", in a "computer simulation" of a devastating Cylon attack on Los Angeles.
* "": conducts a botched drug transaction with the Colombian drug dealer Hector, while "Earthquake" is seen playing on a television in the background.
* "": Footage from the sequence featuring the collapse of the Hollywood dam was reused during the destruction of the Visitors water pumping station.
* : Parts of the movie, namely portions of the film when the big earthquake struck, were used in the music video for the song "."