Chatti
This article is about the ancient Germanic tribe. For the village in Pakistan, see Chathi. 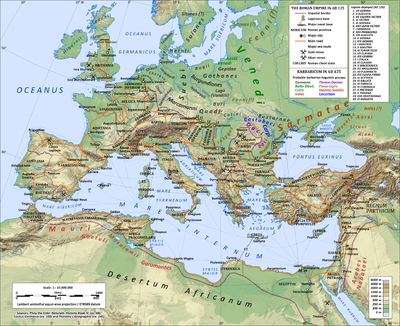 The Roman empire under Hadrian (ruled 117–138), showing the location of the Chatti in central Germany.

The Chatti (also Chatthi or Catti) were an ancient Germanic tribe whose homeland was near the upper Weser.[1] They settled in central and northern Hesse and southern Lower Saxony, along the upper reaches of the Weser River and in the valleys and mountains of the Eder, Fulda and Weser River regions, a district approximately corresponding to Hesse-Kassel, though probably somewhat more extensive. According to Tacitus,[2] among them were the Batavians, until an internal quarrel drove them out, to take up new lands at the mouth of the Rhine.

While Julius Caesar was well informed about the regions and tribes on the eastern banks of the Rhine, he never mentions the Chatti. The first ancient writer to do so is Strabo, some time after 16 AD, who includes the Chatti in a listing of "poorer Germanic tribes" that had previously fought the Romans.[3] For the first century AD, we are quite well informed about the Chatti, mostly thanks to Tacitus, who provides important information about the Chatti's part in the Germanic wars and certain elements of their culture. After the early 3rd century AD, however, the Chatti virtually disappear from the sources and are only called upon as a topical element or when writing about events of the 1st century. Cassius Dio is most likely not only the first author to mention the Alamanni but also the last one to record an actual historical appearance of the Chatti. Writing about the Germanic war of Caracalla in 213 AD, he has the emperor fight "Κέννους, Kελτικòν ἔθνος" ("the Kenni, a Celtic people").[4] However, this is taken from an excerpt of Dio in the writings of Joannes Xiphilinus, whereas the Fragmenta Valesiana actually refer to the same people as "Chattoi".[5] The usage of "Kελτικός" for Germanic peoples was an archaic tradition among Greek writers.
After Cassius Dio, the name "Chattus" appears among others in a panegyric by Sidonius Apollinaris in the late 5th century, now as a poetic synonym for "Germanus".[6] The last ancient source to mention the Chatti, if only in a quotation of Sulpicius Alexander describing events of the late 4th century, was Gregory of Tours.[7]

The Chatti successfully resisted incorporation into the Roman Empire, joining the Cheruscan war leader Arminius' coalition of tribes that annihilated Varus' legions in 9 AD in the Battle of the Teutoburg Forest. Germanicus later, in 15, raided their lands in revenge, but Rome eventually responded to the Chatti's belligerent defense of their independence by building the limes border fortifications along the southern boundary of their lands in central Hesse during the early years of the 1st century. A major raid by the Chatti into Germania Superior was defeated decisively by the legions in 50 AD.[8] Roman sources identify the fabled Mattium, beyond the Eder, as the capital of the Chatti. Destroyed by Germanicus, its location is not known today but generally assumed to be in the wider neighbourhood of Fritzlar north of the river Eder.[9]

According to Tacitus in his book Germania (chapter 30), they were disciplined warriors famed for their infantry, who (unusually for Germanic tribes) used trenching tools and carried provisions when at war. Their neighbours to the north were the Usipi and Tencteri.

The Chatti eventually became a branch of the much larger neighboring Franks and were incorporated in the kingdom of Clovis I, probably with the Ripuarians, at the beginning of the 6th century.

In 723, the Anglo-Saxon missionary Winfrid—subsequently called St. Boniface, Apostle of the Germans—proselytizing among the Chatti, felled their sacred tree, Thor's Oak, near Fritzlar, as part of his efforts to compel the conversion of the Chatti and the other northern Germanic tribes to Christianity.

The Chasuarii were a Germanic tribe mentioned by Tacitus in the Germania. According to him, they dwelt "beyond the Chamavi and Angrivarii", who dwelt on the lower Rhine river. Many, therefore, believe the tribe to have inhabited the modern region of Hannover. Some take the name Chasuarii to mean "dwellers on the Hase [river]", a tributary to the Ems. The 2nd century geographer Claudius Ptolemy mentions that the Kasouarioi lived to the east of the Abnoba mountains, in the vicinity of Hesse. Many historians are of the opinion that the Chasuarii were the same as the people called the Chattuarii mentioned by several authors.