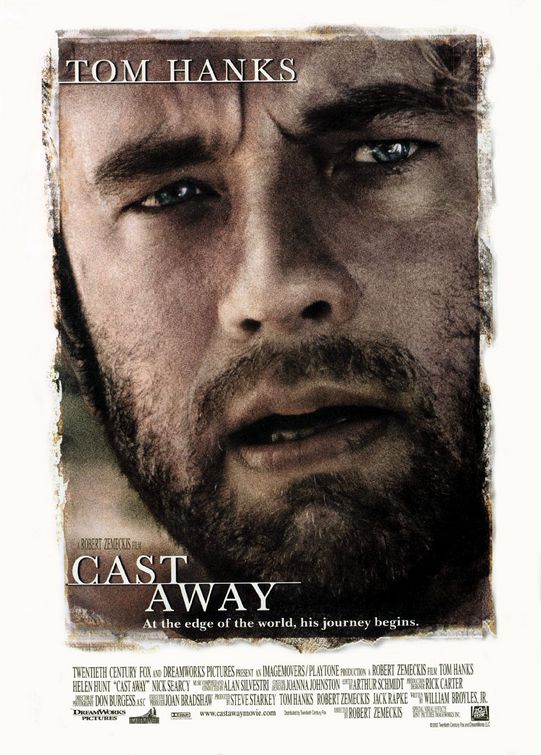 
"Cast Away" is a 2000 by and about a modern day , a employee who is stranded on an uninhabited island after his plane goes down over the South Pacific. was nominated for at the for his performance.

Chuck Noland () is a highly efficient executive. He is in a relationship with Kelly Frears (). Both of them seem to want to get married but Chuck's busy schedule is an obstacle.

Chuck is home in Memphis, for Christmas after returning from a trip to , . As he and Kelly enjoy a holiday gathering with relatives, Chuck is called away on a business trip. As he's leaving for the trip, he gives Kelly a box containing an engagement ring and tells her not to open it until New Year's Eve and Kelly gives Chuck a pocket watch containing a picture of herself.

While flying through a thunderstorm somewhere over the southern , the FedEx jet decompresses, forcing them to land in the ocean. The plane crashes into the night time sea in flames. Saved by an inflatable life-raft, Chuck floats helplessly on the ocean until he is brought to a deserted island.

Within a few days, Chuck ascertains that the island is uninhabited and sets out to do what he can to survive: he drinks and later stores rain water in the discarded husks, attempts to catch fish and crab, creates shelter by draping his raft over palmtree trunks and, later, by discovering s in the island rock. The body of one of the flight crew washes up on the island along with several FedEx packages. Chuck buries the pilot and neatly piles away all of the washed up packages. After an attempt to leave the island in the inflatable raft (the same he came in) fails because, while a coral reef creates a large "pool" of calm water, the surf outside the reef is too strong; Chuck realizes that his stay on the island may be prolonged. He then opens all the packages, except for one with an angels' wings logo, and finds a practical use for whatever is inside. One package contains a Wilson volleyball, on which Chuck leaves a bloody hand print that inadvertently resembles a face. He names the ball "Wilson" and starts speaking to it. He develops a deep, friendship-like dependency with this volleyball and his conversations with it are almost exclusively the only times he talks while on the island. Chuck realizes that his is growing worse, and decides to knock out the tooth with an , which he found inside the package.

Four years later, a dramatically thinner Chuck is seen expertly tossing a spear into the water, killing a fish. The cave in which Chuck now sleeps contains myriad pictures of Kelly on the cave walls and a box holding his possessions. One morning, Chuck finds a large piece of a plastic from a that washed up on the island. Upon seeing how the wind blew the plastic down after standing it up in the sand, he decides to build a raft, using the plastic as a sail, so that he can escape from the island. With construction of the raft complete, Chuck sets out to sea, bringing with him coconuts filled with rain water, Wilson, and the FedEx box with the angels' wings logo. After breaking through the island surf, Chuck takes one last look at the island and becomes visibly emotional for leaving. Chuck spends days drifting out in the open sea, fishing and collecting rain water until he can be rescued. After two weeks of drifting, Wilson falls into the water as Chuck is sleeping, and the current carries him away from the raft. Chuck desperately tries to get Wilson back, but is unsuccessful, afraid of swimming too far away from the raft. Now alone on the raft, Chuck sobs over the loss of his friend. After drifting for an unknown period of time, he is rescued by a passing .

On returning home, Chuck must come to terms with the fact that everyone he was close to has given him up for dead long ago and moved on with their lives. Kelly has married and had a child with another man, Dr. Jerry Lovett (). Chuck reunites with Kelly and they profess their love for each other, but she realizes that she has responsibilities to Jerry and her daughter and says goodbye to Chuck. Chuck feels like he lost Kelly all over again and decides to let go and move on with his life.

He sets out to deliver the one package he never opened on the island, the package with the angels' wings, and his search leads him to a ranch in Texas with the angels' wings sculpture over the main entrance. No one seems to be home, so he leaves the package at the front door of the residence with an attached note that says "This package saved my life." Chuck then drives away, stopping at a remote crossroads located in the Texas panhandle where he gets out of his car to read a map. (In his car, he keeps a new Wilson volleyball.) As he is studying the map at the intersection, a woman drives up and tries to help him by describing where all the roads from the intersection lead. As she drives away Chuck notices the angels' wings painted on the back of her truck. A long close up of Chuck smiling in the direction the truck had left closes the film.

"Cast Away" was filmed on , a member of the . [cite book |others=Korina Miller, Robyn Jones, Leonardo Pinheiro |title=Fiji |date=2003 |publisher= |isbn=1740591348 |pages=p. 54] It is in a subgroup of the Mamanuca , which is sited off the coast of , 's largest island. The island used for filming is at coord|-17.611547|177.033777|region:GB_type:isle_scale:5000_source:wikimapia The island has become a tourist attraction following the film's release. Upon Chuck's return, Kelly explains to Chuck that when he was found, he had "drifted 500 miles", and the island was "about 600 miles south of the ." There is no land between and the southern-most Cook Islands of .

The film makers actually burned down several trees on the island for the movie. In return they were required to plant three new trees for each one they burned down.

The producers made up a list of seemingly useless items that would be in the packages that Noland recovered: party dress, ice skates, divorce papers, video tapes, etc. They turned this over to a group of survival experts who decided what the protagonist might be able to do with them: fish net, axe, rope. In a panel discussing the movie, director joked that the final unopened package contained a waterproof, solar-powered . This led to a Super Bowl commercial that spoofed the movie, which shows Hanks' character (not played by Hanks in the commercial) making the final delivery of an unopened package to a suburban residence. As he delivers the FedEx box, he says to the recipient "by the way, what was in the box?" to which the female recipient says "nothing much, just a satellite phone, GPS locater, fishing rod, water purifier, and some seeds." [ [http://www.youtube.com/watch?v=XvX7ovvf-LI YouTube - Fedex - Castaway ] ]

Production was on hiatus for about a year to allow Tom Hanks to lose some weight and grow his hair. During that period, Robert Zemeckis used the crew to produce and direct "."

"Cast Away" is well-known for its prominent marketing. Wilson and FedEx were the two major brands advertised in this film.

At the time of the movie's release, Wilson Sporting Goods launched its own joint promotion centered around the fact that one of its products was "co-starring" with Tom Hanks. Wilson manufactured a volleyball with a parody of the hand print face on one side. It was sold for a limited time during the movie's initial release.

Another product placed in the film is the soft drink , which Chuck is shown drinking on the plane before the crash, and again after his return to civilization. This could also be a reference to the previous Hanks and Zemeckis collaboration "" where the title character drinks several Dr Peppers at the .

Zemeckis has stated in many interviewsFact|date=July 2008 that FedEx did not pay anything for their presence in the movie, though Fred Smith, the CEO of FedEx at the time, made an appearance as himself as the one to welcome Chuck home. Chuck's "coming-home" scene was also filmed on location at FedEx's home facilities in . Initially, FedEx Corporation did not like the plane crash scene. The movie increased FedEx's brand awareness in Asia and Europe. [cite news | title = A look at some of the biggest hits in film and TV product placement | url = http://www.hollywoodreporter.com/thr/film/feature_display.jsp?vnu_content_id=1000901395 |publisher = | date = 2005-04-28 | accessdate = 2007-11-25]

Media executive Lloyd Braun of ABC Studios pitched the idea of a television series based on the movie, titled: "Cast Away: The Series". That show later evolved into the hit ABC show "Lost". The pilot episode of the show was the most expensive pilot ever produced and fearful ABC executives subsequently fired Braun, ignorant of the success to come for "Lost". It cost between $10 and $14 million. [cite news|title=New series gives Hawaii 3 TV shows in production| last=Ryan|first=Tim|url =http://starbulletin.com/2004/05/17/news/story7.html| publisher=Honolulu Star-Bulletin|date=May 17, 2004]

The film's minimal score was composed by for which he won a in 2002. The film's soundtrack is most notable for its lack of score while Chuck is on the island. There is no music at all until he escapes, which is used to resemble the lack of civilization on the island. A pseudo exception to this could be said to be the scene where Tom Hanks' character creates fire, in which he sings "" by , among others. The tracks for the score are as follows:

One of "Cast Away"'s notable "characters" is "Wilson," a volleyball from . The volleyball is found in one of the FedEx boxes. When Chuck tries to make a fire and cuts his hand, he angrily palms the volleyball and throws it. The blood from his wound makes the hand-shaped mark that forms the ball's "face". This volleyball plays the role of a mute, infinitely patient, non-living listener in the movie, providing Chuck with a companion for the 1,500 days he spends on the island. Wilson is also slightly modified by Noland sometime during the four-year gap; a section of the volleyball above the face has been removed and a coif of leaves has been inserted, serving as hair. From a theatrical standpoint, Wilson also serves as a person for Chuck to converse with, providing dialog in what would otherwise have been a single-person performance. Chuck loses Wilson after the volleyball washes off the raft and drifts too far out to sea for Chuck to be able to retrieve it. Towards the end of the film, though, Chuck is seen driving with a brand new volleyball sitting in the passenger seat.

After the film, Wilson's final resting place is in a display cabinet in FedEx Kinko's CEO Ken May's office in Dallas, Texas.