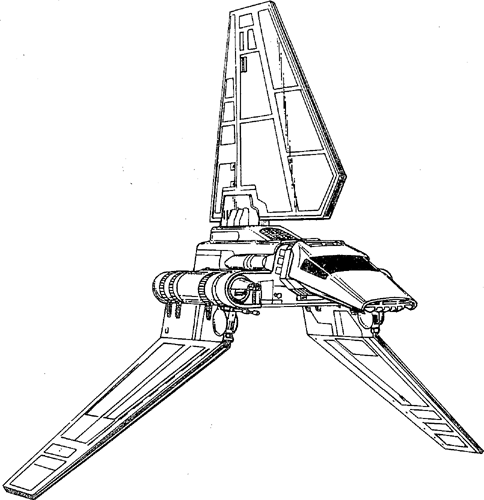 Lambda-class shuttles are spacecraft in the fictional "" universe. The craft appear in ', ', and in the 's book, comics, and games.

, , and borrowed elements from the skyhopper designed for ' when refining the shuttle's appearance.' was designed to appear like a predecessor to the Lambda class. [cite web|url=http://www.starwars.com/databank/starship/thetaclassshuttle/?id=bts|title=Imperial Theta-class shuttle (Behind the Scenes)|work=Star Wars Databank|publisher=|accessdate=2007-09-08]

Lambda-class shuttles also appear in numerous titles, including the and Rogue Squadron flight simulator series. In the X-Wing series, particularly , Lambda-shuttles are frequently found in the hands of pirates and smugglers, rather than exclusive Imperial use. Missions often use them as starfighters instead of their role of transporting important personal. They fare poorly due to their large size and lack of maneuverability. The Lambda shuttle was erroneously referred to as the "Tydirium Shuttle" and its rear turret is removed. TIE Fighter also featured a similar but more streamlined vehicle that did feature a rear turret, called the "Delta"-class JV-7 escort shuttle, however this has made no appearances outside of the games.