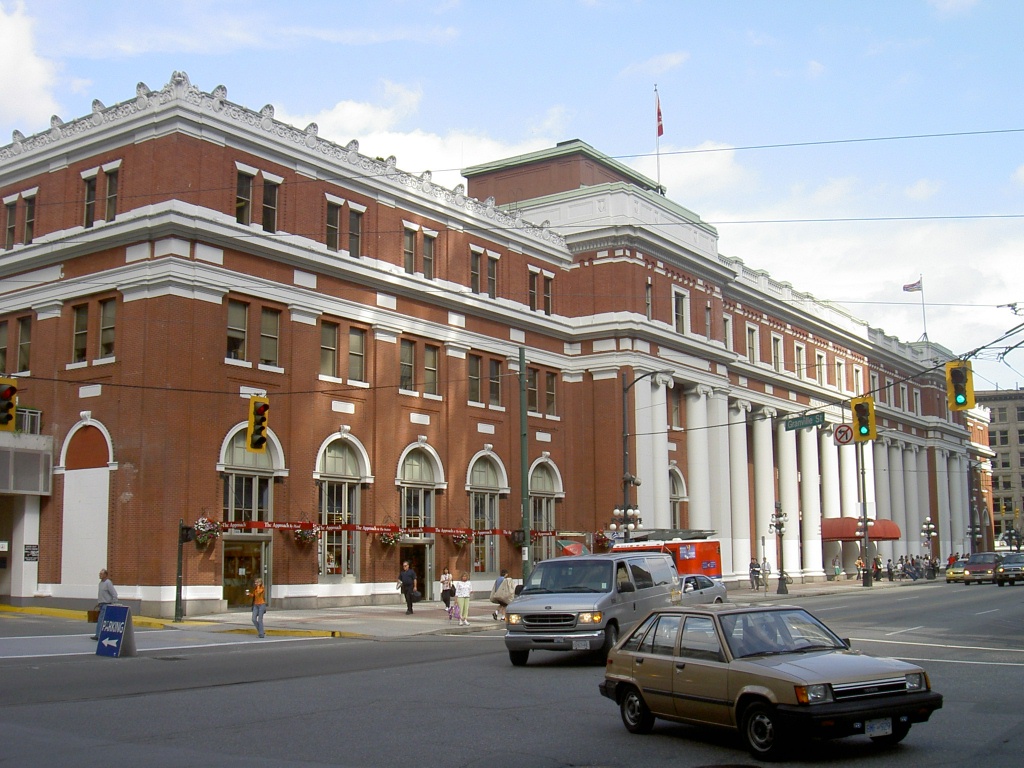 Waterfront Station is located on the south shore of , just east of the north foot of at 601 West Cordova Street. The station is within walking distance of Vancouver's historical district, the cruise ship terminal, the Helijet International helipad, and , the downtown terminals for and .

Other nearby facilities include the downtown campuses for and the , federal government services in the , the , and the revolving restaurant and observation deck. Underground passages connect to the Fairmont Waterfront Hotel and Canada Place, while a second street-level entrance opens onto Howe Street.

Waterfront Station is the downtown Vancouver terminus for the following TransLink services:
*The Expo SkyTrain line to Burnaby, New Westminster and Surrey;
*The Millennium SkyTrain line to Burnaby and New Westminster (via the Expo line), circling back to in east Vancouver;
*The subway to Richmond and (*under construction - due to open in November, 2009);
*The passenger ferry to in North Vancouver;
*The commuter train and TrainBus to Port Moody, Coquitlam, Port Coquitlam, Pitt Meadows, Maple Ridge, and Mission; and
*Various local and suburban bus routes, including the express service to Richmond.

HeliJet International does not directly serve Waterfront Station, but its helipad is adjacent to the SeaBus terminal and passengers can use the SeaBus's overhead walkway to access Waterfront Station's main terminal building. The terminals are located approximately two blocks west of .

Waterfront Station was built by the (CPR) and was the Pacific terminus for the CPR's transcontinental passenger trains to Montréal and Toronto until circa 1979, when took over the railway's passenger operations and rerouted trains to Union Station (originally the station, now called Pacific Central Station) near .

Waterfront Station's transformation into a public transit facility began in 1977. That year, the SeaBus began operating out of a purpose-built floating pier that was connected to the main terminal building via an overhead walkway above the CPR tracks. The CPR's passenger platform and some of its tracks were torn up in the early 1980s to make way for the guideway of the original SkyTrain line (the Expo Line), which opened in late 1985. During , special SkyTrain shuttle trains operated between Waterfront Station and (then named Stadium Station), connecting the Canadian Pavilion at Canada Place to the main Expo site.

A private ferry company, , ran passenger ferries from a new dock on the west side of the SeaBus terminal to Victoria and in the early 1990s, but ultimately folded. In 2003, began operating out of Royal Sealink's old facility at the SeaBus terminal. In 2006, following major engine problems with their only vessel, they folded as well.

The current station is the third CPR station, the second CPR station was located one block west at the foot of Granville, and unlike the current classical-styled Waterfront Station was built in "railway gothic" like the CPR's many railway hotels.
* [http://www.bcarchives.gov.bc.ca/cgi-bin/www2i/.visual/img_med/dir_82/g_01043.gifCPR Station, foot of Granville, 1906]
* [http://www8.cpr.ca/cms/English/General+Public/Heritage/Mail/Vancouver/Profiles/CPR+station.htm]

The next station is...