The Defenestrations of Prague were two incidents in the history of Bohemia. The first occurred in 1419 and the second in 1618, although the term "Defenestration of Prague" more commonly refers to the latter incident. Both helped to trigger prolonged conflict within Bohemia and beyond. Defenestration is the act of throwing someone or something out of a window (from the Latin: de: out of, with a downward motion implied; fenestra: window).

The First Defenestration of Prague involved the killing of seven members of the city council by a crowd of radical Czech Hussites on 30 July 1419.

Jan Želivský, a Hussite priest at the church of the Virgin Mary of the Snows, led his congregation on a procession through the streets of Prague to the New Town Hall (Novoměstská radnice) on Charles Square. The town council members had refused to exchange their Hussite prisoners. While they were marching, a stone was thrown at Želivský from the window of the town hall.[1] The mob became enraged at this event and, led by Jan Žižka, stormed the town hall. Once inside the hall, the group threw the judge, the burgomaster, and some thirteen members of the town council out of the window and into the street, where they were killed by the fall or dispatched by the mob.[1]

King Václav IV (Wenceslas in English, Wenzel in German), upon hearing this news, was so stunned that he died a little time after, supposedly due to the shock.[1]

The procession was a result of the growing discontent at the contemporary direction of the Church and the inequality between the peasants and the Church's prelates, and the nobility. This discontentment combined with rising feelings of nationalism and increased the influence of radical preachers such as Jan Želivský, influenced by Wycliff, who saw the current state of the Catholic Church as corrupt. These preachers urged their congregations to action, including taking up arms, to combat these perceived transgressions.

The First Defenestration was thus the turning point between talk and action leading to the prolonged Hussite Wars. The wars broke out shortly afterward and lasted until 1436. 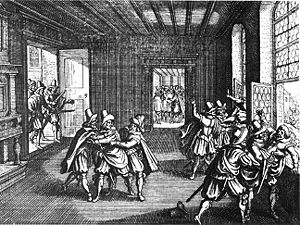 A contemporary woodcut of the defenestration in 1618. 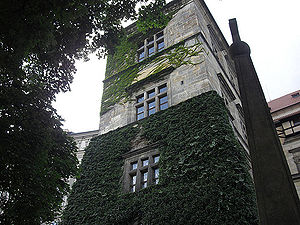 The window where the second defenestration occurred. Note the monument to the right of the castle tower.

The Second Defenestration of Prague was central to the start of the Thirty Years' War in 1618.

Some members of the Bohemian aristocracy rebelled following the 1617 election of Ferdinand (Duke of Styria and a Catholic) as King of Bohemia to succeed the aging Emperor Matthias. In 1617, Roman Catholic officials ordered the cessation of construction of some Protestant chapels on land of which the Catholic clergy claimed ownership. Protestants contended the land in question was royal, rather than property of the Catholic Church, and was thus available for their own use. Protestants interpreted the cessation order as a violation of the right to freedom of religious expression granted in the Letter of Majesty issued by Emperor Rudolf II in 1609. They also feared that the fierce Catholic Emperor Ferdinand would revoke the Protestant rights altogether once he came to the throne.

On 23 May 1618, an assembly of Protestants gathered, led by Count Thurn, who had been deprived of his post as Castellan of Karlstadt by the Emperor and who, in reaction to an inflammatory letter received from the Emperor's principal adviser, Bishop Klesl, had exhorted their followers into throwing the Regents appointed by the Emperor out the window in Prague Castle. "As is customary", the Protestants bribed their way into Prague Castle (the Hradschin) where the Regents were meeting. Finding only four of the Regents along with their secretary in attendance they demanded the Regents admit they had been responsible for Klesl's letter. 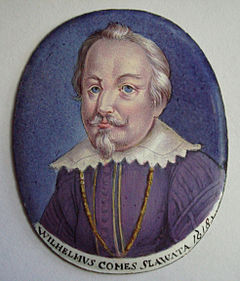 Vilem Slavata of Chlum, 1618 enamel on copper, by follower of Dominicus Custos

The first two denied responsibility and were removed from the room leaving only Count Vilem Slavata, Count Jarolslaw Martinitz (who had replaced Thurn as Castellan), known Catholic hard-liners, and the secretary to the Regents. Slavata and Martinitz had been the intended victims all along. Many in the room later claimed that they thought the two Regents were only going to be arrested, and by the time they realized what was happening it was too late. The Regents were thrown out the third floor window along with the Regents' secretary, Philip Fabricius. Some texts say they fell 70 feet[2][3] (21 meters) and landed on a large pile of manure in a dry moat and survived.[4][5] Philip Fabricius was later ennobled by the emperor and granted the title Baron von Hohenfall (literally "Baron of Highfall").[6]

Roman Catholic Imperial officials claimed that the three men survived due to the mercy of angels assisting the righteousness of the Catholic cause. Protestant pamphleteers asserted that their survival had more to do with the horse excrement in which they landed than the benevolent acts of the angels.

More events of defenestration have occurred in Prague during its history, but they are not usually called defenestrations of Prague.

A defenestration (chronologically the second defenestration of Prague, sometimes called one-and-halfth defenestration) happened on 24 September 1483, when a violent overthrow of the municipal governments of the Old and New Towns ended with throwing the Old-Town portreeve and the bodies of seven killed aldermen out of the windows of the respective town halls.

Sometimes, the name the third defenestration of Prague is used, although it has no standard meaning. For example, it has been used[7] to describe the death of Jan Masaryk, who was found below the bathroom window of the building of the Czechoslovak Ministry of Foreign Affairs on 10 March 1948. The official report listed the death as a suicide,[8] but there have been persistent rumours that he was murdered, either by the nascent Communist government in which he served as Foreign Minister, or by the Soviet secret services.[9]

An English translation of part of Slavata's report of the incident is printed in Henry Frederick Schwarz, The Imperial Privy Council in the Seventeenth Century (Cambridge, Mass.: Harvard University Press, 1943, issued as volume LIII of Harvard Historical Studies), pp. 344–347.