Constellation
This article is about the star grouping. For other uses, see Constellation (disambiguation). 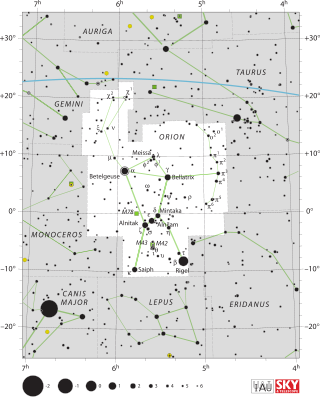 The constellation Orion is one of the most recognizable in the night sky.

In modern astronomy, a constellation is an internationally defined area of the celestial sphere. These areas are grouped around asterisms, patterns formed by prominent stars within apparent proximity to one another on Earth's night sky.

There are 88 standard constellations recognized by the International Astronomical Union (IAU) since 1922. The majority of these goes back to the 48 constellations defined by Ptolemy in his Almagest (2nd century). The remaining ones were defined in the 17th and 18th century; the most recent ones are found on the southern sky, defined in Coelum australe stelliferum by Nicolas Louis de Lacaille (1763).

The Late Latin term constellātiō can be translated as "set with stars". The term was first used in astrology, of asterisms that supposedly exerted influence, attested in Ammianus (4th century). In English the term was used from the 14th century, also in astrology, of conjunctions of planets. The modern astronomical sense of "area of the celestial sphere around a specific asterism" dates to the mid 16th century.

Colloquial usage does not distinguish the senses of "asterism" and "area surrounding an asterism". The modern system of constellations used in astronomy focuses primarily on constellations as grid-like segments of the celestial sphere rather than as patterns, while the term for a star-pattern is asterism.

For example, the asterism known as the Big Dipper corresponds to the seven brightest stars of the larger IAU constellation of Ursa Major.

The current list of 88 constellations recognised by the International Astronomical Union since 1922 is based on the 48 listed by Ptolemy in his Almagest in the 2nd century.[1][2] Ptolemy's catalogue is informed by Eudoxus of Cnidus, a Greek astronomer of the 4th century BC who introduced earlier Babylonian astronomy to the Hellenistic culture. Of the 48 constellations listed by Ptolemy, thirty can be shown to have a much longer history, reaching back into at least the Late Bronze Age. This concerns the zodiacal constellations in particular.

Knowledge of the Neo-Babylonian zodiac is also reflected in the Hebrew Bible. E. W. Bullinger interpreted the creatures appearing in the books of Ezekiel (and thence in Revelation) as the middle signs of the four quarters of the Zodiac,[3][4] with the Lion as Leo, the Bull is Taurus, the Man representing Aquarius and the Eagle standing in for Scorpio.[5] The biblical Book of Job (dating to the 6th to 4th century BC) is also aware of a number of constellations, including עיש `Ayish "bier", כסיל Kĕciyl "fool" and כימה Kiymah "heap" (Job 9:9, 38:31-32), rendered as "Arcturus, Orion and Pleiades" by the KJV, but `Ayish "the bier" actually corresponding to Ursa Major.[6] The term Mazzaroth מַזָּרֹות, a hapax legomenon in Job 38:32, may be the Hebrew word for the zodiacal constellations.

The Greeks adopted the Babylonian system in the 4th century BC. A total of twenty Ptolemaic constellations are directly continued from the Ancient Near East. Another ten have the same stars but different names.[7]

There is only limited information on indigenous Greek constellations. Some evidence is found in Hesiod.[clarification needed] Greek astronomy essentially adopted the older Babylonian system in the Hellenistic era, first introduced to Greece by Eudoxus of Cnidus in the 4th century BC. The original work of Eudoxus is lost, but it survives as a versification by Aratus, dating to the 3rd century BC. The most complete existing works dealing with the mythical origins of the constellations are by the Hellenistic writer termed pseudo-Eratosthenes and an early Roman writer styled pseudo-Hyginus.

The basis of western astronomy as taught during Late Antiquity and until the Early Modern period is the Almagest by Ptolemy, written in the 2nd century. Indian astronomy is also based on Hellenistic tradition, via transmission by the Indo-Greek kingdoms.

In classical Chinese astronomy, the northern sky is divided geometrically, into five "enclosures" and twenty-eight mansions along the ecliptic, grouped into Four Symbols of seven asterisms each. The 28 lunar mansions are one of the most important and also the most ancient structures in the Chinese sky, attested from the 5th century BC. Parallels to the earliest Babylonian (Sumerian) star catalogues suggest that the ancient Chinese system did not arise independently from that of the Ancient Near East.[8] Classical Chinese astronomy is recorded in the Han period and appears in the form of three schools, which are attributed to astronomers of the Zhanguo period. The constellations of the three schools were conflated into a single system by Chen Zhuo, an astronomer of the 3rd century (Three Kingdoms period). Chen Zhuo's work has been lost, but information on his system of constellations survives in Tang period records, notably by Qutan Xida. The oldest extant Chinese star chart dates to the Tang period and was preserved as part of the Dunhuang Manuscripts. Native Chinese astronomy flourished during the Song Dynasty, and during the Yuan Dynasty became increasingly influenced by medieval Islamic astronomy.[9]

The constellations around the South Pole were observable from south of the prime meridian, by either Babylonians, Greeks, Chinese or Arabs.

The modern constellations in this region were defined during the Age of exploration, notably by Dutch navigators Pieter Dirkszoon Keyser and Frederick de Houtman at the end of sixteenth century. They were depicted by Johann Bayer in his star atlas Uranometria of 1603. Several more were created by Nicolas Louis de Lacaille in his star catalogue, published in 1756.

Some modern proposals for new constellations were not successful; an example is Quadrans, eponymous of the Quadrantid meteors, now divided between Boötes and Draco. The classical constellation of Argo Navis was broken up into several different constellations, for the convenience of stellar cartographers.

By the end of the Ming Dynasty, Xu Guangqi introduced 23 asterisms of the southern sky based on the knowledge of western star charts.[10] These asterisms were since incorporated into the traditional Chinese star maps.

In 1922, Henry Norris Russell aided the IAU in dividing the celestial sphere into 88 official constellations.[11] Where possible, these modern constellations usually share the names of their Graeco-Roman predecessors, such as Orion, Leo or Scorpius. The aim of this system is area-mapping, i.e. the division of the celestial sphere into contiguous fields.[12] Out of the 88 modern constellations, 36 lie predominantly in the northern sky, and the other 52 predominantly in the southern.

In 1930, the boundaries between the 88 constellations were devised by Eugène Delporte along vertical and horizontal lines of right ascension and declination.[13] However, the data he used originated back to epoch B1875.0, which was when Benjamin A. Gould first made the proposal to designate boundaries for the celestial sphere, a suggestion upon which Delporte would base his work. The consequence of this early date is that due to the precession of the equinoxes, the borders on a modern star map, such as epoch J2000, are already somewhat skewed and no longer perfectly vertical or horizontal.[14] This effect will increase over the years and centuries to come. 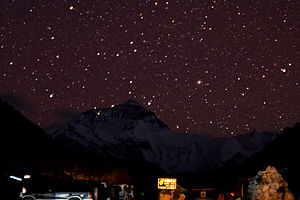 Much of the dark space between stars, as seen in the sky of the image above, are due to the human eye's low light sensitivity. Other images (like the "hubble deep field" - not pictured) detect far more stars.
Main article: Asterism (astronomy)

The stars of the main asterism within a constellation are usually given Greek letters in their order of brightness, the so-called Bayer designation introduced by Johann Bayer in 1603. A total of 1,564 stars are so identified, out of approximately 10,000 stars visible to the naked eye.[15]

The stars within an asterism rarely have any substantial astrophysical relationship to each other, and their apparent proximity when viewed from Earth disguises the fact that they are far apart, some being much farther from Earth than others. However, there are some exceptions: many of the stars in the constellation of Ursa Major (including most of the Big Dipper) are genuinely close to one another, travel through the galaxy with similar velocities, and are likely to have formed together as part of a cluster that is slowly dispersing. These stars form the Ursa Major moving group.

The "Emu in the sky," a constellation defined by dark clouds rather than the stars. An IAU interpretation would recognise Crux (the Southern Cross) above the emu's head and Scorpius on the left. The head of the emu is the Coalsack.

Dark patches in the Milky Way are more visible and striking in the southern hemisphere than in the northern. They vividly stand out when conditions are otherwise so dark that the Milky Way's central region casts shadows on the ground. Some cultures have discerned shapes in these patches and have given names to these "dark cloud constellations." Members of the Inca civilization identified various dark areas or dark nebulae in the Milky Way as animals, and associated their appearance with the seasonal rains.[16] Australian Aboriginal astronomy also describes dark cloud constellations, the most famous being the "emu in the sky" whose head is formed by the Coalsack.