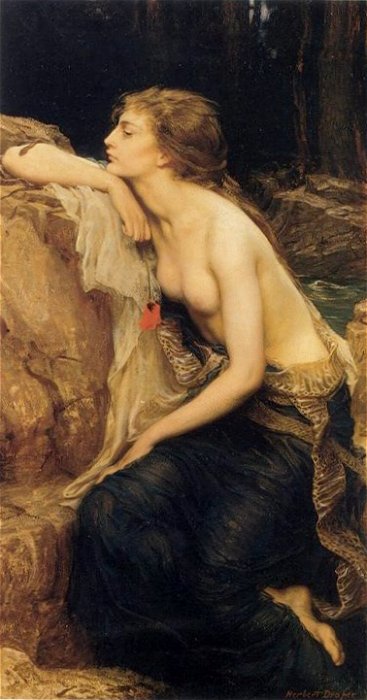 Image_Caption = The "Lamia" (painting by , 1909)
Grouping =
Sub_Grouping = Daimon
AKA =
Similar_creatures = ,
Mythology = Greek
Country = Libya
Region =
Habitat = In , Lamia was a Queen of Libya who became a child-murdering daemon. In later writings she is pluralized into many lamiae (Greek "lamiai"). [The Roman equestrian "" of the Lamiae, allied with the ), "Odes" 3.17, addressed to Aelius Lamia) and linked with Formiae bore no connection with the mythic Greek bogey. The French World War II agent Philippe Thyraud de Vosjoli, on whose exploits the 1969 film "Topaz" was based, used "Lamia" as his code name (P.L. Thyraud de Vosjoli, "Lamia" [Boston: Little, Brown] 1970).] Similar in type to other female monsters from Greco-Roman myth, such as the empuses and the lyces, she is distinguished from them by her description as half-woman and half-serpent. [ [http://www.theoi.com/Phasma/Empousai.html Theoi Project: "Lamia"] ] Her name comes from the "" ( _el. Laimos), thus she devoured human children. [, "", 1177.]

Lamia was the daughter of and [, "Library of History" xx.41.] , a personification of the country of Libya and a queen of Libya herself, whom loved. [Aristophanes, "Peace".] discovered the affair and stole away Lamia's children, where upon Lamia in her grief became a monster and began murdering children. Zeus granted her the power of prophecy as an attempt at appeasement, as well as the related ability to temporarily remove her eyes. [Bell, "Women of Classical Mythology", drawing upon Diodorus Siculus 22.41; Suidas 'Lamia'; Plutarch 'On Being a Busy-Body' 2; Scholiast on Aristophanes' "Peace" 757; Eustathius on "Odyssey" 1714) (Mythology dictionary C20th)] Either turned her into a monster; the grief from Hera killing all her children, save Scylla, made her monstrous; or she was already one of 's brood [""12.124 and , noted by , "Gods of the Greeks" 1951:38 note 71.] . [Plutarch, "De curiositate", 2.] heard that Lamia had the gift to be able to take her eyes out and then put them back in. A later embroidery on this archaic is that this gift was the gift of ZeusFact|date=August 2007, and by a further explanatory improvisation, that Lamia was "cursed" with the inability to close her eyes so that she would always obsess over the image of her dead children.

, in "" (l.340) imagined the impossibility of retrieving the living children she had engulfed:

translates the line:Shall Lamia in our sight her sons devour,:and give them back alive the self-same hour?

, in "", describes the witch Meroe and her sister as "Lamiae": [ The Elizabethan translator rendered "lamiae" as "hags", obscuring the reference for generations of readers. ( [Apuleius] , "Metamorphoses" [Harvard University Press] 1989 ("Metamorphoses" is more familiar to English-language readers as "The Golden Ass".).] "The three major enchantresses of the novel—Meroe, Panthia and Pamphylia—also reveal many vampiric qualities generally associated with Lamiae," David Walter Leinweber has noticed. [Leinweber, "Witchcraft and Lamiae in 'The Golden Ass'" "Folklore" 105 (1994:77–82).] . identifies Lamia as the mother of [Stesichorus Frag 220, Eustathius on Homer's Odyssey 1714.] , by Triton. Further passing references to Lamia were made by (i.II.8) and ("Ethics" vii.5). In the Vulgate translated , the spirit in Isaiah 34:14 who conceived by Adam a brood of monsters, as "lamia", thus sealing Lamia's image as a seductress in the Christian imagination.

Mothers used to threaten their children with the story of Lamia. [, "Against " (ch.iii)] Leinweber states, "She became a kind of fairy-tale figure, used by mothers and nannies to induce good behavior among children" [Leinweber 1994:77.] .

Many lurid details were conjured up by later writers, assembled in the "", expanded upon in Renaissance poetry and collected in Bulfinch and in Brewer's "": Lamia was envious of other mothers and ate their children. She was usually female, but Aristophanes suggests a hermaphroditic , perhaps simply for monstrosity's sake [Aristophanes, "Peace", l..758] . Leinweber notes [Leinweber 1994:78] , adding "By the time of Apuleius, not only were Lamia characteristics liberally mixed into popular notions of sorcery, but at some level the very names were interchangeable." Nicolas K. Kiessling compared the lamia with the medieval and in "". [See Nicolas K. Kiessling, "Grendel: A New Aspect" "Modern Philology" 65.3 (February 1968:191–201.]

One interpretation posits that the Lamia may have been a seductress, as in ' "Life of Apollonius of Tyana", where the philosopher Apollonius reveals to the young bridegroom, Menippus, that his hastily-married wife is really a lamia, planning to devour him. [ Leinweber 1994:77f] Some s were named "Lamia". [Kerényi 1951 p 40.] The connection between and the courtesan Lamia was notorious. [See Plutarch, "Life of Demetrius" xxv.9] [See , "Varia Historia" XII.xvii.1] [See , "" III.lix.29.] In the painting by (1909, "illustration above"), the Lamia who moodily watches the serpent on her forearm appears to represent a "". Though the lower body of Draper's Lamia is human, he alludes to her serpentine history by draping a shed snake skin about her waist.

In Renaissance s, Lamia has the body of a and the breasts and head of a woman, like the image of Fact|date=August 2007.

described the Lamia in "", presenting a description of the various colors of Lamia that was based on Burton's, in "". [Keats made a note to this effect at the end of the first page in the fair copy he made: see William E. Harrold, "Keats's 'Lamia' and Peacock's 'Rhododaphne'" "The Modern Language Review" 61.4 (October 1966:579–584) p 579 and note with bibliography on this point. ]

In the modern Greek folk tradition, the Lamia has survived and retained many of her traditional attributes. [Lamia receives a section in Georgios Megas and Helen Colaclides, "Folktales of Greece" (Folktales of the World) (University of Chicago Prtes) 1970.] John Cuthbert Lawson remarks that "....the chief characteristics of the Lamiae, apart from their thirst for blood, are their uncleanliness, their gluttony, and their stupidity". [Lawson, "Modern Greek Folklore and Ancient Greek Religion: A Study in Survivals" {Cambridge University Press)) 1910:175ff.] The contemporary Greek proverb, "της Λάμιας τα σαρώματα" ("the Lamia's sweeping"), epitomises slovenlinessFact|date=August 2007; and the common expression, "τό παιδί τό 'πνιξε η Λάμια" ("the child has been strangled by the Lamia")Fact|date=August 2007, explains the sudden death of young children (ibid). As in Bulgarian folklore and Basque legends, the Lamia in Greece is often associated with caves and damp places.

In modern Greek folk tales, Lamia is an ogress similar to .Fact|date=August 2007 She lives in a remote house or tower, eats human flesh, has magical abilities, keeps magical objects, or knows information crucial to the hero of the tale's quest. The hero must avoid her, trick her, or gain her favour in order to obtain one of those. In some tales, the lamia has a daughter who is also a magician and helps the hero, eventually falling in love with him.

A creature with particularities slightly "Lamian" appears in the movie "", complete with a hunger for children and eyes that are not in its sockets. The figure of , a character in "", while not carnivorous, shares with her the latter characteristic.