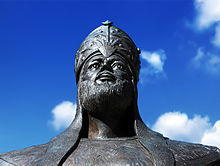 Statue of Almanzor in Calatañazor, Spain

He was born Muhammad Ibn Abi Aamir, into a noble Arab family from the area of Algeciras. He arrived at the Court of Córdoba as a student studying law and literature. He became manager of the estates of Prince Hisham II.

In a few years he schemed his way from this humble position to considerable heights of influence, eliminating his political rivals in the process. Caliph Al-Hakam II died in 976 and Ibn Abi Amir was instrumental in securing the succession of the young Hisham II, aged twelve, to the throne. Almanzor had a great influence in Subh, ruler as mother the young Hisham II. Two years later he became Hajib (a title similar to that of Grand Vizier in the Muslim East), or Chancellor. During the following three years he consolidated his power with the building of his new palace on the outskirts of Córdoba, al-Madina az-Zahira, while at the same time completely isolating the young Caliph, who became a virtual prisoner in Medina Azahara. Following Al-Hakam II's death, Al-Mansur had Hakam's library of "ancient science" books destroyed.[1]

The Caliphate of Córdoba c. 1000, at the apogee of Al-Mansur's rule

In 981, upon his return to Córdoba from the Battle of Torrevicente, in which he crushed his last remaining rival (and father-in-law, Ghalib Al-Nasiri), he assumed the title of Al-Mansur bi-llah, Victorious by Grace of God. In Christian Europe he was referred to as Almanzor.

Although he mainly fought against León and the Castile, he sacked Barcelona in 985, Leon in 988 and Santiago de Compostela in Galicia in 997, taking the cathedral bells to be melted down into lanterns for the Great Mosque of Cordoba.[2][3] Almanzor, knew the magnitude of the devotion to Saint James' sepulcher, and ordered his generals to protect the tomb and all sacred objects that they encountered.[citation needed]

Almanzor also waged several campaigns against the Kingdom of Navarra, including his longest, in which he defeated a Castilian army at the Battle of Cervera.

He married Abda, daughter of Sancho Garcés king of Navarra, who bore him a son by the name of Abd al-Rahman. He was commonly known as Sanchuelo (Little Sancho, in Arabic: Shanjoul).

The consequence of his victories in the north was to prompt the Christian rulers of the Peninsula into an alliance against him (c. 1000). He was succeeded by his son Abd al-Malik al-Muzaffar, who continued to rule Al-Andalus as Hajib until his death in 1008.

After Abd al-Malik, his ambitious half brother Abd al-Rahman Sanchuelo took over. He however tried to take the Caliphate for himself from Hisham as al-Mansur had effectively made the caliph a figurehead ruler. This plunged the country into a civil war. The Caliphate disintegrated into rival Taifa kingdoms. This proved disastrous for Muslim Iberia as, being divided, the Christian Kingdoms were able to conquer the Taifas one by one.

Almanzor peak in central Spain is named after him.

'Almanzor' is a major character in the thoroughly researched, but extremely anachronistic, historical novel The Long Ships (Red Orm) by the Swedish author Frans Gunnar Bengtsson. Three chapters of the book take place in Muslim Iberia under Almanzor's rule, depicted from the point of view of Scanian Vikings who are captured by Moors while on a raid into Spain, serving as galley slaves. Later they become mercenaries in Almanzor's bodyguard and finally manage to escape back to Denmark after participating in the conquest and sacking of Santiago de Compostella.