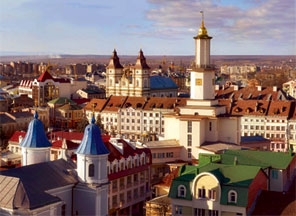 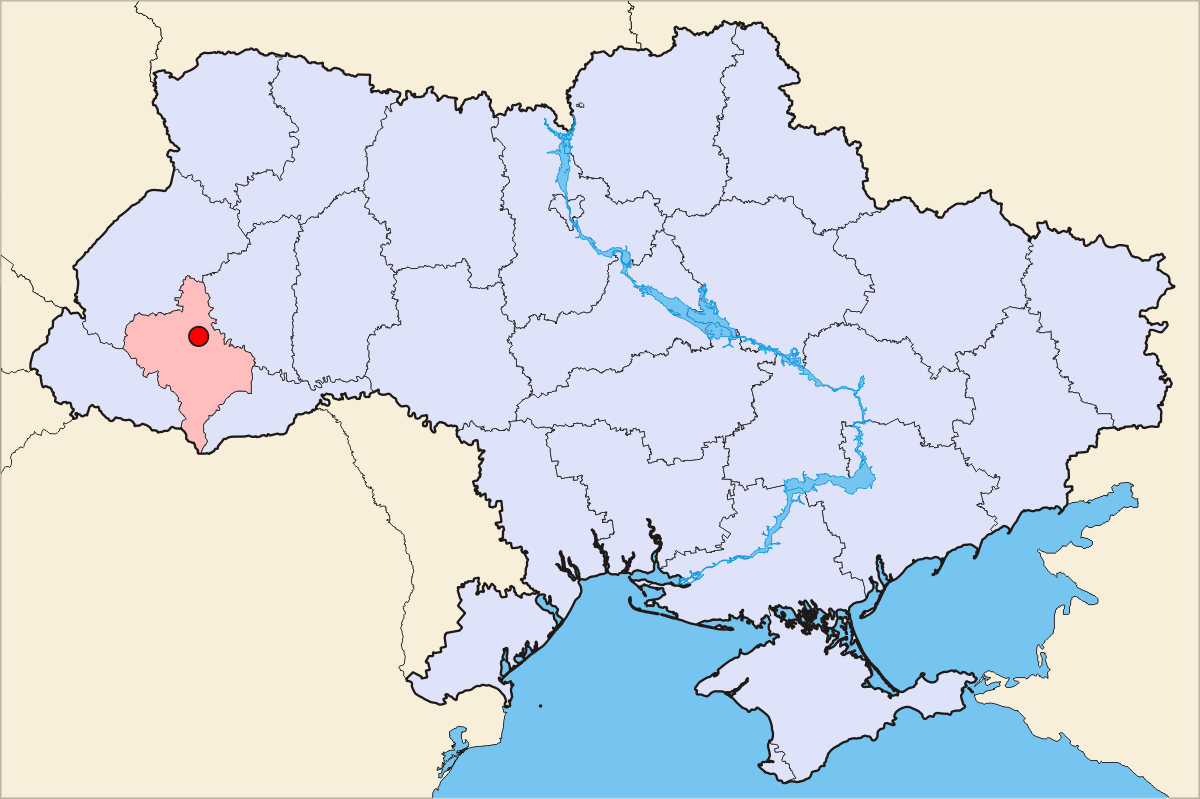 Ivano-Frankivsk ( _uk. Івано-Франківськ), is a historic city located in western .

It is the administrative center of the (province), and is designated as its own separate (district) within the . Prior to 1962, the city was known as Stanyslaviv ( _uk. Станиславів; _pl. Stanisławów; _ru. Станислав; _de. Stanislau; _yi. סטאַניסלאוו).

The city is situated in the Carpathian region, approximately 120 metres above . [ [http://www.populstat.info/Europe/ukraineg.htm UKRAINE : general data ] ] As is the case with most of Ukraine, the climate is moderate continental with warm summers, and fairly cold winters.

The city, named "Stanisławów", was erected as a to protect the from . It was built on the site of the village of Zabolottya, which had been founded in 1437. [ [http://72.14.209.104/search?q=cache:dWqRwkaLXOAJ:pages.prodigy.net/euroscope/ivano_frankivsk.html+Zabolottya&hl=en&gl=us&ct=clnk&cd=4&lr=lang_en EuroScopeUSA] - Ivano-Frankivsk] Its name was coined by a Polish nobleman , who honored his father, .

The city was first mentioned in 1662 in connection with it being granted the . Soon afterwards, when in 1672 the Turks conquered the fortress of , Stanisławów, together with , became a strongpoint against Turkish forces. It was attacked and besieged in 1676, but the Turks did not manage to capture and pillage the city. However, Stanisławów was so badly destroyed that in 1677 the in relieved the city of its tax duties.

Jews were permitted to build houses for themselves on the "Street of the Jews" (which was located at that time by the flood bank). [ [http://www.jewishgen.org/Yizkor/pinkas_poland/pol2_00360.html#part1 Jewish Genealogy] - The Jewish Settlement from its Inception until 1772] Later, the fortress also successfully withstood attacks by Turkish and Russian forces. Extensively rebuilt during the , it was sometimes called "Little ". [ [http://72.14.209.104/search?q=cache:LesYIGFB6-0J:www.ukraine.com/cities/ivano-frankovsk/+%27%27Little+Leopolis%22&hl=en&gl=us&ct=clnk&cd=1&lr=lang_en Travel Ivano-Frankivsk] ] The city was also an important center of in Poland, with an Armenian church, in which a painting of Mary was kept. The painting was in 1945 moved to .

In 1772, after the it became a part of the , and successively of the autonomous . During , the frontline was for some time placed in the area of the city, Russians and Austrians fought several battles in Stanisławów and its vicinity, and in 1917 Russian forces burned the central districts, during the .

In October 1918, the Austro-Hungarian Empire collapsed, and the (ZUNR) was proclaimed. [ [http://www.torugg.org/History/history_of_galicia.html Toronto Ukrainian Genealogy Group] - History of Galicia]

In 1919, it was a subject of Polish&ndash;Ukrainian skirmishes, and it eventually was annexed by Poland as part of the as the capital of the . She was also occupied by n army between - in 1919.

In 1920, the took over the city for a brief period. In the few days between the retreat of the Red Army and the entry of the Polish army, the private army of roamed around wildly for a few days, two Jews were killed, there was a great deal of property damage, and several Jewish women were raped.. [ [http://www.jewishgen.org/Yizkor/pinkas_poland/pol2_00364.html#part3 Jewish Genealogy] - Between the Two World Wars]

In the 1939 invasion of Poland by German and Soviet forces, the territory was captured by the Soviets in September 1939 and included into the . Between fall of 1939 and June 1941, Soviet regime ordered thousands of inhabitants of the city (most of them Poles) to leave their houses and move to ] , where most of them perished (see: )

There were more than 40,000 Jews in Stanisławów when it was occupied by the Germans on , .

During the Nazi occupation (1941-44), more than 600 educated Poles and most of the city's Jewish population was murdered.

On , , Galicia became the fifth district of the . On , , later called "Blutsonntag" ("Bloody Sunday"), thousands of Jews were gathered on the ; then the German forces escorted them to the Jewish cemetery, where s had already been prepared. On the way the German and Ukrainian escorts beat and tortured the Jews. At the cemetery the Jews were compelled to give away their valuables and show their papers. The men of the Security Police (Sicherheitspolizei; ) then started mass shootings, assisted by members of the German Order Police () and the railroad police. The Germans ordered the Jews to undress in groups and then proceed to the graves where they were shot. They fell into the grave or were ordered to jump in before being shot. The German forces shot between 8,000 and 12,000 Jews on that day. [ [http://www.ushmm.org/wlc/en/index.php?ModuleId=10007236 Holocaust Encyclopedia] - Stanisławów]

Up to July 1942 most killings were carried out in Rudolf's Mill, and from August onward, in the courtyard of the Sipo headquarters. On , , the Germans held a "reprisal Aktion" for the murder of a Ukrainian, which they blamed on a Jew. More than 1,000 Jews were shot. German policemen raped Jewish girls and women before taking them to the courtyard of the Sipo headquarters.

About 11,000 Jews were still living in Stanisławów when the next Aktion took place. On or 23, 1943, Brandt, who had succeeded Hans Krüger as SS-Hauptsturmführer, ordered the police forces to surround the ghetto -- initiating the final liquidation. Four days after the beginning of the Aktion, the Germans put up posters announcing that Stanisławów was "free of Jews."

When the Soviet army reached Stanisławów on , , there were about 100 Jews in the city who had survived in hiding. In total about 1,500 Jews from Stanisławów survived the war.

A formal indictment against Hans Krüger was issued in October 1965, after six years of investigations by the State Prosecutor's Office. On , , the State Court sentenced him to . He was released in 1986.

In and there were other trial proceedings against members of the and the in Stanisławów in 1966.

In 1962 the name changed to honor Ukrainian writer . [ [http://72.14.209.104/search?q=cache:mHnOXHsdAMwJ:www.sbedif.if.ua/src/history.en.htm+changed+franko+name+city+ivano&hl=en&gl=us&ct=clnk&cd=4&lr=lang_en From the History of Ivano-Frankivsk] ] Five years later, was established.

In the early 1990s the city was a strong center of the Ukrainian independence movement.

Ivano-Frankivsk is home to a number of sports teams, most notably football club . The club is currently disbanded. Its former president reorganized the local university (University of Nafty i Hazu) team into new "FSK Prykarpattia". That team does currently plays in the . Also, in the interbellum period it was home to soccer team .

* "Endure, Defy and Remember", by Joachim Nachbar, 1977
* "False papers: deception and survival in the Holocaust", by Robert Melson, Univ. of Illinois Press, 2000. Dr. Melson is a professor of political science at , whose grandfather owned the Mendelsohn factory in Stanislawow.
* "I'm not even a grown up, the diary of Jerzy Feliks Urman", translated by Anthony Rudolf and Joanna Voit, ed. by Anthony Rudolf. London: Menard Press, 1991. 11-yr old in Stanislaw commits suicide to avoid capture by Nazis.
* "Living Longer than Hate", by C.S. Ragsdale