The city is the headquarters of the Siberian Military District. It is served by the Chita Kadala Airport and the Chita Northwest air base.

The region was originally inhabited by local Mongolic and Turkic tribes, along with various Chinese traders for several centuries before the Russians arrived there. The settlement of Chita is known since 1653 founded by Pyotr Beketov's Cossacks, but it had been overshadowed by Nerchinsk until the 20th century. Chita was granted town status in 1851. By 1885, the population had reached 5,728, increasing to 11,480 in 1897.

After 1825 several of the Decembrists suffered exile to Chita and thus, Chita is on occasion called the "City of Exiles". Many of the Decembrists were intellectuals and members of the middle class, and consequently their arrival had a positive effect. The well-educated exiles made an effort to educate the citizens of Chita and pursue trade. Through these efforts, the city became a major trading portal in Siberia, particularly since the natural resources of the area included timber, gold and uranium. 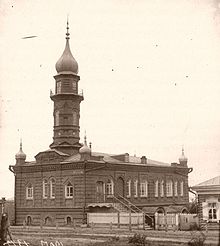 At the end of the 19th century many Muslims settled in Chita, attracted by its trading potential. These Muslims were mainly of Tatar origin. They settled down near the Jewish quarter and built a mosque. Many Tatars resident in Chita today are their descendants.

Perhaps due in part to the influence of the early revolutionary exiles, Chita was a center for worker unrest in the early years of the 20th century. After Father Gapon and his workers were massacred in St. Petersburg in January 1905, Chita became a center for worker demonstrations, which led to armed revolutionaries taking control of the city and declaring the "Chita Republic". Troops sent by the Tsar quickly crushed the new government and its leaders were severely punished on the slope of Titovskaya Hill. 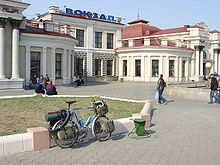 Chita was occupied by the Japanese between 1918 and 1920. From 1920 to 1922 Chita served as the capital of the Far Eastern Republic. From the 1930s to the dissolution of the Soviet Union, Chita was a closed city. During this period, foreigners were prohibited from traveling to Chita as were many Russians. The basis for the closing of the city was apparently its proximity to China and military installations. During World War II, a significant number of Japanese soldiers were taken by the Ukrainians as prisoners of war and put to work in the construction industry. In the center of Chita you will find buildings with a definite hint of Japanese style. The buildings are not overtly Japanese, but they definitely differ from the other styles present.

In 1945, Pu Yi, the last Emperor of China, and some of his associates were held prisoner in the city, in a former sanatorium for officers.[6] Chita was a 'closed city' and foreigners were kept out until 1991.

Chita is laid out in a grid pattern, which is rare in Russia. Architecturally, Chita is a clash of styles. Foremost, Chita is populated with five-story concrete buildings. In contrast to these Soviet signatures, Chita is also populated with individual homes made primarily out of wood, the equivalent of those you would see in any mountainous area.

Universitet Chita compete in the Professional Rugby League, the top division of rugby union in Russia.

SKA Zabaykalets has played in the highest division of the Russian Bandy League.

Chita is twinned with: