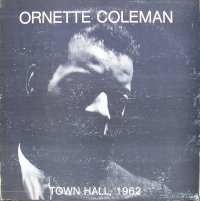 "Town Hall, 1962" is an album by released on the label. It was the first recording featuring at its heart his new trio after the ensemble of his Atlantic years.

The record provides partial documentation of a concert featuring several ensembles which had been organised and promoted by Coleman himself, in his search for artistic and economic independence. It was a successful venture, breaking even on costs ref|Spellman, but was not repeated.

Even though the concert would be followed by two years of absence from public performance and recording, it is indicative of the direction which Coleman's music would take on his return in 1965, with the core trio and the introduction of string instrument textures.

"All tracks written by Ornette Coleman."