Mungalalu Truscott Airbase, which during World War II was known as Truscott Airfield (or usually just simply referred to as Truscott) is today a commercial air field in the remote Kimberley region of Western Australia. The airbase falls under the traditional ownership of the Wunambal Gaambera people (who use the traditional name for the area; Mungalalu). The base is managed by ShoreAir Pty Ltd and has been registered with the Civil Aviation Safety Authority as a commercial air base since April 2005. ShoreAir manages the Mungalalu Truscott Base under an agreement with the Wunambal Gaambera Aboriginal Corporation (WGAC). Agreement has been reached with WGAC to sub lease the base area with licences for access to certain roads and areas of coastline for an initial term of twenty years expiring 30 June 2022 with right of renewal for a further twenty years.

Mungalalu Truscott is some 281 nmi (520 km) west-southwest of Darwin and 333 NM northeast of Broome. Located on the Anjo Peninsula in the far North Kimberley district of Western Australia. Mungalalu Truscott occupies 46 km2 in an Aboriginal reserve. 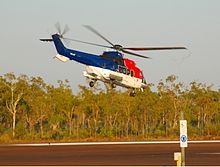 Mungalalu Truscott Base has been classified and entered into the Council of the National Trust of Australia (WA) list of Heritage Places due to its significance during World War II and the remaining artefacts. The Trust may nominate Mungalalu Truscott Base for inclusion by the Australian Heritage Commission in the Register of the National Estate in the future. The Trust has communicated that the classification has "no legal significance and does not infringe any rights of ownership" leaving administration to the joint understanding of the Operator (ShoreAir) and the WGAC.

Today the primary role of the airbase is that of a staging base for the workers in the nearby offshore oil and gas fields. Workers are flown into the base by fixed wing aircraft and then transferred to helicopters at Truscott for the final flight leg to the offshore platforms in and around the Timor Sea. Currently Super Puma helicopters operated by CHC Helicopters are based at Mungalalu Truscott and Bristow Helicopters are preparing to begin operations from the base in late 2007. Other regular users of the base include various pearl farm operators from the region and the Australian Customs Service who use the airbase as a staging area for their aerial surveillance patrols in the area.

Mungalalu Truscott is the largest all weather airbase in the Far North Kimberley Region. The sealed runway with PAPI lights for night operations is the premier option for companies with business interests in the region. Mungalalu Truscott complies with CASA MoS 139 regulation and allows unrestricted operations for aircraft up to 29 seat capacity. The runway is 1720 m in length and 30 m in width with turning nodes, ramps and taxiways, all areas have recently been sealed. Over the past 10 years the airfield has been regularly inspected by Connell Wagner and latest advice is that the pavement could trial aircraft with MAUW of 20 tonnes. In the past years, numerous aircraft types have utilised the Truscott aerodrome, they have included Fairchild Metro 23, Embraer EMB 120 Brasilia and Bombardier Dash 8. The Paspaley pearling company subsidiary, Pearl Aviation, stages its Grumman Mallard flying boats from Truscott in support of its pearling operations in the region.

Truscott Air Base Facilities in 2007

As well as the regular aircraft operations from the base, the Wunambal Gaambera traditional owners operate a small tour company in the area around the base, guiding tourists around the heritage listed site, visiting several World War II relic sites along with some significant Aboriginal rock art sites found around the base. Expedition cruise vessels, such as the MV Orion operated by Orion Expedition Cruises also visit the base. 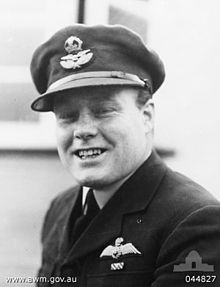 The airfield was originally constructed in 1944 as a Royal Australian Air Force (RAAF) base and was actively used during World War II. RAAF Truscott was named after the Australian air ace, Keith "Bluey" Truscott, who had been killed in an accident in 1943.

The World War II base was built to succeed a temporary base 80 km (50 mi) south at Drysdale River Mission (Kalumburu), and was a staging base for Allied bombers and flying boats, from bases further south, making attacks on Japanese targets in the Dutch East Indies. The site was chosen because it is the point on the Australian mainland closest to Java, where Japanese forces were concentrated. Aircraft from nearby RAAF fighter squadrons (and occasionally RAF units) were rotated through the base to provide air defence for the base.

Construction and the subsequent operations from the base were conducted under total secrecy and the existence of the base was never formally acknowldged until after the war.

The host unit at the base was RAAF 58 Operating Base Unit (58OBU). Australian Army anti-aircraft and searchlight batteries were also based at Truscott scattered around the peninsula. A civilian work unit from the Allied Works Council was based at Truscott for the maintenance of roads around the base and a RAAF Marine Section was stationed in West Bay to support the Catalina Flying Boat operations, operate search and rescue water craft and support the maritime resupply of the air base.

RAAF and USAAF heavy and medium bombers would stage through Truscott, often rearming and refuelling several times on bombing missions into Japanese held areas before returning to their home bases around Western Australia and the Northern Territory.

B-24 Liberator heavy bombers and B-25 Mitchell medium bombers were two of the most common airframes to stage through Truscott. Catalina flying boats operated from West Bay and Spitfire aircraft were the most common fighter rotated through the base for local air defence.

At the end of the war the base was closed down, with it playing a small role as a transit camp for the repatriation of Dutch citizens from the former Netherlands East Indies in 1946.

Several significant air accidents occurred during the operation of the base in World War II.

On 16 November 1944, two Spitfires from 459 (RAF) Squadron collided while changing formation in preparation for landing at the base. Warrant Officer Bushell, pilot of Spitfire A58-364, managed to parachute to safety; but W/O Posse, pilot of A58-300 died in the crash. Remnants of both aircraft still exist near the present airstrip.

On 23 March 1945, Liberator A72-80, under the command of Squadron Leader N. H. Straus, crashed shortly after takeoff. Straus found that the plane was unable to climb above about 400 ft (130 m), and turned around at Parry Harbour. He was unable to see the runway, and the aircraft crashed into the sea about one kilometre short of Truscott, killing all on board (11 crew, and one passenger) .

On 20 May 1945, Liberator A72-160 (a B-24M-10-CO model), on a mission to Balikpapan and piloted by Flt Lt F. L. Sismey, crashed soon after take off, near the north west end of the runway. The aircraft was destroyed by its depth charges exploding. All 11 crew members were killed.

One of the most well known aircraft wrecks at Truscott actually pre-dates the base by two years. On the western side of the air base, in Vansittart Bay, there lies the wreckage of a USAAF Air Transport Command C-53 Skytrooper transport (a variant of the DC-3 Dakota; serial number 41-20066). This aircraft made an emergency landing on 26 February 1942, after the pilot got lost while flying from Perth to Broome, and put it down on a salt pan on Anjo Peninsula. The crew and passengers were rescued by a commercial flying boat several days later.

On 18 January, 1944, Sergeants Castle and Martin, part of an RAAF unit making preparations for construction of the airfield heard a vessel which they suspected was a Japanese submarine or boat. In order to prevent Japanese forces learning of Truscott's location, they did not investigate. They reported their story to North-Western Area Headquarters who thought that it may have been a Japanese submarine running on the surface to charge its batteries. It was later confirmed that they had heard a Japanese reconnaissance vessel named Hiyoshi Maru, a converted 25 ton fishing boat.

Research done after the war has confirmed that Lieutenant Susuhiko Mizuno lead a special Japanese Army Reconnaissance party from Koepang, in Timor on board the Hiyoshi Maru. The party landed on Browse Island and stayed for about 3 hours. On the next morning they entered an inlet on the West Australian coast. Three landing parties led by Lieutenant Susuhiko Mizuno, Sergeant Morita and Sergeant Furuhashi, went ashore and explored different areas. They even took some 8 mm movie footage of what they saw. As it turned out they had landed only 25 km from where the RAAF were several weeks later to start building the secret airfield.

On 20 July 1944 a Japanese Mitsubishi Ki-46-II "Dinah" Aircraft, piloted by Lt. Kiyoshi Izuka with his observer Lt. Hisao Itoh was shot down over the Anjo Peninsula by a flight of RAAF Spitfires killing both crew. As of September 2007 the remains of the Japanese aircraft was still on the peninsula near the current operating air base.