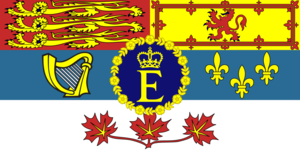 It is used only when the Queen is in or is attending an event abroad as the Canadian (for example, the commemorations at on , , and the rededication of the memorial at Vimy on , ). The flag must be broken immediately upon the sovereign's arrival and lowered directly after her departure from any building, ship, aircraft, or other space or vehicle. The Queen's official representative, the , has a dedicated flag, as does each of the Lieutenant Governors.

As per Department of National Defence protocol, the Queen's personal standard must be flown on a bearing the crest of the Arms of Canada as the pike head. [ [http://www.saskd.ca/heritage.pdf Department of National Defence: The Honours, Flags and Heritage Structure of the Canadian Forces; pg. 280] ] The flag is not allowed to be used by any other person besides the sovereign; flags are kept at and supplied to Canadian Heritage Visit Staff by the Household Staff prior to the Queen's arrival. It takes precedence above the national flag, standard of the Governor General, and those of the other members of the Canadian Royal Family, and Lieutenant Governors. [ [http://www.canadianheritage.gc.ca/progs/cpsc-ccsp/fr-rf/drap-pers_e.cfm The Department of Canadian Heritage – The Queen's Personal Canadian Flag] ]

The flag consists of the Royal Arms of Canada in banner form, defaced with one variant of the Queen's : a blue disk with the initial "E," crowned, all within a wreath of s, all gold-coloured. The disk is taken from the Queen's Personal Flag.

The first quarter at the top left is made up of three heraldic lions "passant gardant" (historically referred to as "leopards") on a red background; this is derived from the Coat of Arms of England, representing the English aspect of the monarchy and the fact that English is the most prominent official language of Canada.

The second quarter at the top right is made up of a red rampant lion within a double border with . This is derived from the Royal Coat of Arms of Scotland; this represents the Scottish aspects of the monarchy and that the Scottish are the third largest ethnic group in Canada.

The third quarter shows the , featured in the Coat of Arms of Ireland. This represents the Irish aspects of the monarchy and the fact that the Irish are the fourth largest ethnic group in Canada.

The fourth quarter shows three "fleurs-de-lis" on a blue background. This is derived from the Coat of Arms of the , representing the French aspect of the monarchy and the fact that the French ties still remain greatly as a result of the Canadian province of .

The bottom of the standard contains a sprig of three red maple leaves on a white background, representing the Canadian aspect of the monarchy, as well as the complete population of Canada regardless of ethnicity.

The sovereign's personal Canadian flag would presumably change if a new having an initial other than "E" succeeds the (forcing a change of cypher) or a new design is approved.

The Standard/flag is protected under the "Trade-marks Act". Section 9(a) "Prohibited Marks" states: