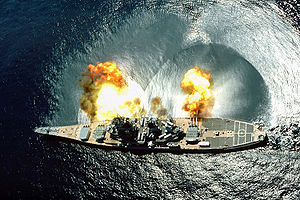 Naval gunfire support (NGFS) (also known as shore bombardment) is the use of naval artillery to provide fire support for amphibious assault and other troops operating within their range. NGFS is one of a number of disciplines encompassed by the term Naval Fires. Modern naval gunfire support is one of the three main components of amphibious warfare assault operations support, along with aircraft and ship-launched missiles. Shipborne guns have been used against shore defences since the early days of naval warfare.

NGFS is classified into two types: direct fire, where the ship has line of sight with the target (either visually or through the use of radar), and indirect fire, which, to be accurate, requires an artillery observer to adjust fire.

When on the gunline, ships are particularly vulnerable to attack from aircraft coming from a landward direction and flying low to avoid radar detection, or from submarines due to a predictable and steady (non-evasive) course.

In the World War I, monitors based in the English Channel were used by the Royal Navy as artillery. They could fire several miles inland against German positions.

The practice reached its zenith during World War II, when the availability of man-portable radio systems and sophisticated relay networks allowed forward observers to transmit targeting information and provide almost instant accuracy reports — once troops had landed. Battleships, cruisers and destroyers would pound shore installations, sometimes for days, in the hope of reducing fortifications and attriting defending forces. Obsolete battleships unfit for combat against other ships were often used as floating gun platforms expressly for this purpose. However, given the relatively primitive nature of the fire control computers and radar of the era combined with the high velocity of naval gunfire, accuracy was poor until troops actually hit the beach and were able to radio back reports to the ship — usually after sustaining heavy casualties.

The solution was to engage in longer and longer bombardment periods — up to two weeks, in some cases— saturating target areas with fire until a lucky few shells had destroyed the intended targets. This had the unfortunate effect of "telegraphing the punch", alerting an enemy that he was about to be attacked. In the Pacific War, this mattered little, as the defenders were usually expecting their island strongholds to be invaded at some point and had already committed whatever combat resources were available. Bombardment periods were usually shorter in the European theater, where surprise was more often valued, reinforcement far more likely, and ships' guns were responding to the movements of mobile defenders, not whittling away at static fortifications.

Naval gunfire can reach as far as 10 miles (20 km) inland, and was often used to supplement land-based artillery. The heavy-caliber guns of some eighteen battleships and cruisers were used to stop German Panzer counterattack at Salerno. Naval gunfire was also used to help curb German operations in Normandy, although the surprise nature of the attack precluded the drawn-out bombardment which could have reduced the Atlantic Wall defences sufficiently, a process that fell to specialist armoured vehicles instead.

Naval gunfire was also useful in a defensive capacity. Older ships were occasionally beached to provide a coastal defence platform, and during the Battle of France the British discovered effective anti-tank artillery in the form of the four-inch (102 mm) guns from destroyers tied up at the quays of Boulogne. 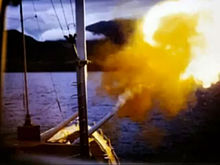 Task Unit 70.8.9, the US Naval Gunfire Support Unit, was made up of destroyers, armed with 5"/38 or 5"/54 guns, and continuously patrolled the coast of South Vietnam to provide NGFS at short notice. If greater firepower was required then larger gunned cruisers were called in for reinforcements. NGFS was controlled by the United States Marines First Air-Naval Gunfire Liaison Company (ANGLICO) who provided spotters, usually airborne in light aircraft but sometimes on foot, in all military regions.

In the 1982 Falklands War, the British used NGFS in support of the advance of the British Army and Royal Marines.

In the 1983 actions in Lebanon, fire support was provided on several occasions by destroyers and cruisers assigned to coastal patrol. They supported the US Marines as well as the Lebanese Army.

In the 2003 Invasion of Iraq, NGFS was used in support of operations on the Al-Faw Peninsula in the early stages of the war by Royal Navy and Royal Australian Navy frigates.

Naval Gunfire is still used for many of its traditional purposes. In the United States Marine Corps, artillery units have several Naval Gunfire Liaison Officers (NGLO, pronounced "no-glow") in each battalion to maintain close contact with the Navy for amphibious operations. The NGLO is responsible for the Shore Fire Control Party and works in the Fire Control Center with other liaison officers to coordinate naval gunfire with close air support, mortars and artillery. The NGLO joins the others in the planning of fire missions in support of the Marine Infantry Regiment.

Additionally, the United States Marine Corps maintains three active (1st, 2nd, & 5th) and two reserve (3rd & 4th) ANGLICO units. ANGLICO members are temporarily assigned to combat units of the United States and foreign nations that lack inherent fire support capability, such as naval gunfire. The navies of the world have almost universally moved away from the largest caliber guns of the early and middle of the 20th century because the battleships and large cruisers that carried them have been scrapped. The aircraft carrier and sea to land missile have proven to be more cost effective.

Naval guns used on modern ships tend to be smaller caliber weapons but with more advanced targeting systems. It is unlikely that the large caliber guns will make a return and much of the traditional role of Naval Gunfire has been taken over by naval air power.

Within the U.S. there is an ongoing debate over the role naval gunfire support should play in warfare. This has taken on a greater sense of urgency since the removal of the last two battleships from the NVR. In 2007, a thesis report submitted to the Joint Forces Staff College/Joint Advanced Warfighting School by Shawn A. Welch, a Colonel in the Army National Guard's Corps of Engineers analyzed the current capacity for naval gunfire support (NGS) and made several conclusion based on the progress made since the retirement of the last two Iowa-class battleships. Welch's thesis report earned the National Defense Universities award for Best Thesis in 2007, estimates that the full force of DD(X) destroyers needed to replace the decommissioned Iowas will not arrive until 2020-2025 at the earliest, and alleges that the U.S. Navy has not accurately assessed the capabilities of its large caliber gun ships since 1990. The report alleges that the Navy has consistently scaled back or outright cancelled programs intended to replace naval gunfire support capacity, in the process making no significant gains for offshore fire support since the retirement of the last Iowa-class battleship in 1992. This failure by the navy to meet Congressional mandates to improve naval gunfire support has caused a rift with the United States Marine Corps and to a lesser extent the United States Army; in the case of the former, the concern is great enough that several three and four star generals in the Marine Corps have openly admitted to the press their concern over the absence of any effective ship based gunfire support, and two separate Commandants of the Marine Corps have testified before the Senate Armed Service Committee on the risks faced by the Marines in the absence of any effective naval gunfire support.[2]

Despite the reduction in calibre size to 5-inch (127 mm) guns, even ground-based NATO forces' artillery observers (FOs)[citation needed] and Forward Air Controllers (FACs)[citation needed] are taught the rudiments of calling in and adjusting naval gunfire. With the exception of a few procedures, the controlling principles are quite similar in both land and naval bombardment. While the ground-based FO starts his adjustment mission by saying, "Adjust Fire", the naval gunfire spotter says, "Fire Mission"; from that point on the procedures are almost identical.

One use of Naval Gunfire in modern operations is to provide Suppression of Air Defense (SEAD) for Close Air Support. Well timed salvos provide covering fire for sorties and prevent enemy troops and batteries from effectively using anti-aircraft weapons.