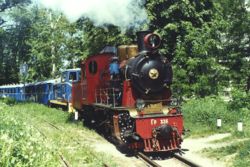 There are children's railways situated in following cities: